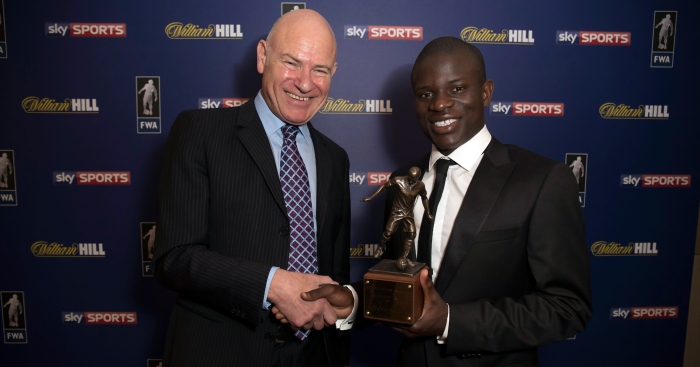 Whitesplain to see…
Rio Ferdinand spoke eloquently earlier this week on BT Sport about Raheem Sterling and his lack of candidature for Footballer of the Year awards being influenced by his blackness:

“I think he has alluded to it that is he is judged by the colour of his skin sometimes.

“I don’t think that is too far from the truth. If Harry Kane was doing what he was doing then we are all talking about Harry Kane being the European Player of the Year.”

Note that at no point did Ferdinand say that Sterling deserved to win the Ballon D’Or; he basically said that if Kane had scored and assisted at the rate of Sterling while pushing his club towards a whole raft of trophies, then the England striker would certainly be in the conversation for major international accolades. And he absolutely would.

Mediawatch thinks you will all agree that what this discussion needs is two white men working for the newspapers who stand accused of treating Sterling in a racist manner to tell Ferdinand that he (and presumably Sterling) is wrong.

First up, Neil Ashton of The Sun:

‘RIO FERDINAND should have scanned the list of Ballon d’Or winners before claiming that Raheem Sterling could not win it because of his skin colour.’

He really didn’t say that.

No, but that’s really not what he said.

‘Given the stature of Ferdinand within the sport, it was one of his lamest – and laziest – observations.’

Not half as lazy as not actually reading/listening to the actual quotes; maybe Ashton should have done rather more than ‘scan’ them first.

And then we have Martin Samuel of the Daily Mail. And this is, well, wow…

‘So, if Virgil van Dijk is voted Footballer of the Year this season, is that because Raheem Sterling is black?’

Sorry, what now? Has anybody said that? Has anybody even intimated that? This sounds like the most straw-like of all straw men…

‘Makes no sense, does it, this idea Sterling is deprived of praise, respect or individual honours because of the colour of his skin? Not when the last two Footballers of the Year have not been white, or the last three to win the players’ award.’

And there you have it, Sterling and Ferdinand are wrong about a perceived racism in the media – according to a white man in the media – because the media have voted N’Golo Kante and Mo Salah as winners of their Player of the Year award. It’s really that simple. There are no subtleties about the media’s treatment of a Jamaican-born Englishman being different to a non-white foreign player, of course.

By the way, it’s almost 30 years since a black Englishman was given the nod by the FWA as their Player of the Year. In the meantime, Gary Lineker, Chis Waddle, Alan Shearer, Teddy Sheringham, Frank Lampard, Steven Gerrard, Wayne Rooney, Scott Parker (yes, really) and Jamie Vardy have won it as white Englishmen.

‘Being black has never kept Sterling out of the team at Manchester City. Nor did it stop his progress with Liverpool or England. He had won 47 caps before his 24th birthday and played in two World Cups.’

Pretty sure Sterling has never claimed that any of his coaches have been racist. Indeed, the only people he has actually cited as treating him differently because of his skin colour are the British media. Do carry on…

‘There is no reason why Sterling will not end his international career with in excess of 100 appearances. At the same age as Sterling now, David Beckham had just 22 caps and he went on to play for England 115 times.

‘On a personal level, Sterling was Liverpool’s young player of the year twice, became Golden Boy of 2014 – an award for young footballers judged by journalists across Europe – has twice been Premier League player of the month and made UEFA’s team of the group stage for the Champions League in 2015-16.’

Well done for successfully reading Raheem Sterling’s Wikipedia page. But how many of those awards were given by British journalists? How does that list refute the allegation that the British media judges Sterling differently because he is a young, black Englishman?

‘And if he hasn’t won Player of the Year or Footballer of the Year, then neither has Sergio Aguero. Maybe other candidates were worthy of consideration, too.’

Literally nobody has said that Sterling should have won either of those awards. Nobody.

‘For Rio Ferdinand to intimate Sterling struggles for recognition because of his ethnicity fails to acknowledge the identity of other award recipients: N’Golo Kante and Mohamed Salah, the last two winners of major individual honours in English football.

‘Before them, the PFA Player of the Year for 2016 was Riyad Mahrez.’

Has Mediawatch entirely missed the part where Ferdinand said that Sterling had been denied awards because of the colour of his skin? What he actually said was that “if Harry Kane was doing what he was doing then we are all talking about Harry Kane being the European Player of the Year”. The key word in that sentence is ‘talking’.

And actually, the fact that Mahrez won the PFA Player of the Year award (voted by the footballers) while the FWA award (voted by journalists) went to Vardy in 2015/16 is not something that particularly strengthens Samuel’s case.

‘So there is another explanation. Maybe last year, Salah’s contribution to Liverpool outstripped that of any one City player.’

For f***’s sake. Nobody of sound mind has ever said that Sterling should have won an award last season ahead of Salah. Nobody.

‘The year before, Kante’s feat in being almost ever-present across back-to-back title-winning seasons for two clubs was unparalleled. And Mahrez was the creative driving force in the most unexpected title victory in the history of English football.’

Yes and yes. Though that doesn’t explain why your British media colleagues gave the 2015/16 award to Vardy ahead of Mahrez. Still not quite sure how all this is connected to Sterling not being in the conversation for European Player of the Year when Kane would have been championed for similar achievements, mind.

‘As such, being a BAME athlete had no effect on their aspirations at all. They were judged on performance, as Sterling is, within football.

‘When he burst on to the scene with Liverpool in 2013-14, was he more influential than Luis Suarez? No? Well, that’s why Suarez won Footballer of the Year.’

This is just weird now.

‘We know black footballers withstand the most despicable abuse. Huddersfield are taking action against one of their own fans for a tweet sent to midfielder Philip Billing.

‘Yet Ferdinand was not citing the actions of individuals. He said that if Harry Kane was in the same form as Sterling this season we would be talking of him as a Ballon d’Or winner.’

Oh so you were listening…

‘He called out a collective mindset. Yet Sterling is being mentioned in plenty of dispatches regarding individual honours. Maybe not the biggest ones continent-wide just yet, but neither was Salah this time last year.’

Well, we are coming up to the one-year anniversary of Salah becoming fifth-favourite for the Ballon d’Or. Right now, you can get Sterling at 40/1 to win the same award. Harry Kane? He’s 30/1 of course. And you know what drives those initial odds? The media, that’s what.

‘Kane is widely admired, but no one gave him a prayer when named in a shortlist of Ballon d’Or nominees in 2018.’

Yep, because he hadn’t won any trophies. Sterling could conceivably win five this year; England are joint-favourites to win the Nations League, after all.

‘This is not about race but realism. Sterling is having an outstanding year, but a Ballon d’Or winner? Have a look at Ronaldo’s Champions League numbers or consider Sterling might not even collect Player of the Year at his club.’

For what feels like the 427th time, nobody has said that Sterling should win the Ballon d’Or. Not Sterling himself. Not Ferdinand. Not an increasingly irate Mediawatch.

And as for Ronaldo’s ‘Champions League numbers’…that didn’t really help him last year.

‘Sterling has been at the centre of very important discussions about race in English football this year but to put every perceived slight down to the colour of his skin is false.

‘He may miss out to Van Dijk, particularly if Liverpool win the title. And, as a third BAME footballer in succession lifts the award, that would be a racist judgment?’

No. It wouldn’t. And you bloody know it wouldn’t. Congratulations, you have just incinerated a straw man.

‘I think I may go with Manchester United to finish fourth. Arsenal have the easier run-in but they have the tendency to slip up against the teams that they have to face.’

Pesky fact: Arsenal are unbeaten this season against the eight teams remaining on their fixture list; they picked up 18 points from a possible 24 in those eight games. They do not ‘have the tendency to slip up against the teams that they have yet to face’ at all.

‘Chelsea are still a bit fragile, on and off the pitch. It doesn’t seem to be quite right and results are fluctuating, quite similar with Arsenal really. Although they seem to have good results, you cannot rely on them and then they have a couple of bad results. It is how they can capitulate in games.’

Pesky fact: Arsenal have not suffered back-to-back Premier League defeats since the opening two games of the season.

‘Manchester United should be fourth because it is the Solskjaer effect and the feel-good effect of what he has done. It will probably be enough to see them in there at the end of the season, they are in an easier place than the other two.’

Nope. No idea. We presume Thommo is so giddy about predicting that Liverpool will win the Premier League that he has entirely failed to notice that United are in fifth, which is not an ‘easier place’ than fourth.

‘Although Tottenham have had a dodgy spell, football-wise they have a bit more togetherness than Arsenal and Chelsea so you can see them having enough to win their games, as well as getting the players fit such as Harry Kane and Dele Alli. Kane is a more consistent goalscorer and I would rely upon him more than Pierre-Emerick Aubameyang at Arsenal and Gonzalo Higuain at Chelsea.’

Oh and Spurs have produced worse form than Newcastle United over the last eight games. They are not out of their ‘dodgy spell’.

But yep, Arsenal are definitely the team that’s ‘fragile’.

Summertime Blues
‘With Chelsea lying sixth in the Premier League, Europa League glory is starting to look like the best way for him to get his Blues back into the Champions League’ – Andrew Dillon, The Sun.

In that case, put your money on Europa League victory at 11/4 and ignore the Evens about them making up a massive three-point deficit to fourth with a game in hand.

After all, Chelsea – unbeaten in their last seven games (barring the penalty shoot-out defeat in the Carabao Cup final) – are just as ‘fragile’ as Arsenal.

Recommended reading of the day
Daniel Zeqiri on VAR