Home F365 Says The play-offs: A change will do you good 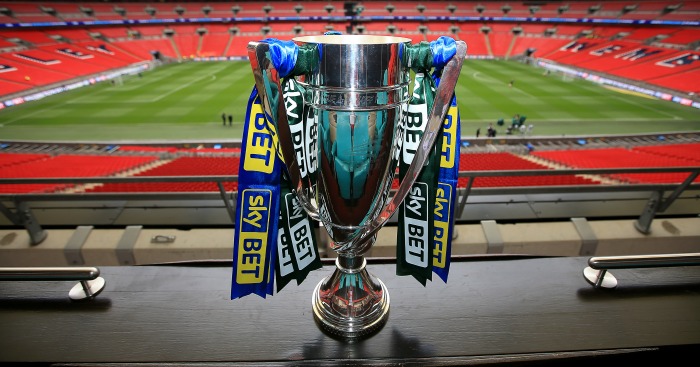 You would struggle to persuade any Football League supporter that the play-offs are not exciting. As Huddersfield Town and Sheffield Wednesday traded blows on Wednesday evening, every ball into the penalty area causing a collective breath to be held, it was impossible not to get caught up in the emotion. By the time Danny Ward was sprinting the length of the Hillsborough pitch towards the away fans having saved Fernando Forestieri’s penalty, the hairs on the back of your neck were stood to attention. This is “Football, bloody hell” played on loop.

Excitement is an enticing argument for keeping anything the same. The play-off games may not be the most watched Football League games on Sky Sports this season (the lack of Newcastle, Leeds United and Aston Villa sees to that), but they are the games that gain the most widespread interest. The agony and the ecstasy – to quote the title of the book on the subject – is so universally recognised by supporters that every game promises intrigue. You could parachute a Liverpool fan into Scunthorpe’s second leg against Millwall last week and they would still find it absorbing. The same is not necessarily true of the corresponding league fixture.

The principal reason for the play-offs’ existence is clear. In a 24-team division, if three teams were promoted and three teams relegated automatically, it would create a period of two to three months in which dead rubbers were commonplace. A lack of competitive relevance breeds apathy, and apathy breeds an erosion of interest in the product. The play-offs’ incorporation of three extra teams into the end-of-season picture means that nine teams out of 24 are covered. The No Team’s Land is reduced.

Yet you would struggle to argue that the play-offs are fair, or at least that they adequately reflect the achievement of a club across a league season. The nagging question is this: If a 46-game league season is not sufficient to decide which team merits promotion, why is an extra three-match tournament? Why is the significantly smaller sample size (during which misfortune or refereeing incompetence is more likely to play a larger part) deemed appropriate?

The nuclear option is to remove play-offs altogether, although that is unlikely to be a popular suggestion. If there is a concern over too much dead space within 24-team leagues, why not adopt the Football League’s 2016 proposals for five leagues of 20 clubs that also addresses some of the problems of fatigue?

Yet there is a happy medium (in my mind at least). Rather than abolishing the play-offs, change their structure to give more weight to finishing third than sixth. If fifth played sixth in a one-off match at the home of fifth (effectively a quarter-final) and then played fourth at the home of fourth for the chance to meet third in a Wembley final, no team would play more matches than they do already. The team finishing fifth would get home advantage, fourth would skip a round and get home advantage and third would skip two rounds.

Then, finishing third over finishing fifth would have huge significance. If that meant that third was more likely to get promoted than they are now, then brilliant – that’s surely the point of a league format anyway? If that means regular league games at the end of the season take on added significance, that’s fine too.

This is not merely a suggestion on a whim; there is a reason for change. Last season, Brighton were involved in a three-way race for automatic promotion with Burnley and Middlesbrough that went down to the final day of the league season. Chris Hughton’s side travelled to the Riverside needing a victory to gain promotion.

Following their 1-1 draw, Brighton were knackered, a squad half-broken by the sprint to the finishing line. Five days later, they lost the first leg of their play-off semi-final 2-0 to sixth-placed Sheffield Wednesday at Hillsborough. Brighton lost three players to injuries in the first 50 minutes, and were down to ten men for the final 30 minutes when Anthony Knockaert was the fourth Brighton player to go off. They had finished 15 points ahead of Wednesday in the league, but stood less chance of progression to Wembley.

The obvious response is to shrug and say “tough sh*t, you knew the rules”, but when the schedule actively hampers teams involved in the automatic promotion race, it invites farce. And so you have David Wagner resting Huddersfield Town players and meekly surrendering to Birmingham City, much to the chagrin of supporters of teams threatened by relegation. And you have teams potentially engineering results to choose which club they would prefer to play in the semi-final. You can hardly blame Wagner for his decision, despite the Football League’s investigation. What is he supposed to do? Huddersfield’s saved energy certainly helped them against Wednesday.

The format of the play-offs has been malleable before. For the first two years (1987 and 1988) the four teams involved were the three that finished below the automatic promotion positions plus one directly above the relegation places in the division above. Until 1990, there were two-legged finals. Before 1999/2000, away goals counted after extra-time. Nothing is set in stone.

The play-offs are a wonderful climax to the league season, and it would be a shame to see them go. But in the interests of competitive legitimacy, the reward for squeezing into sixth should not be similar to running second close and narrowly missing out.

And I’m not just saying that as a supporter of a team that has finished third and missed out. Honest.