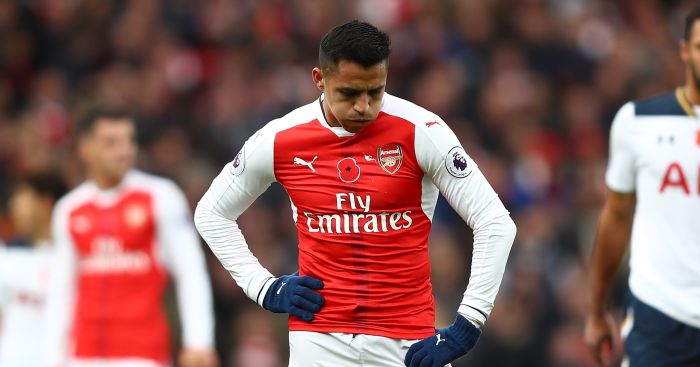 With the international break now upon us, WhoScored.com have taken time to reflect on the Premier League’s most potent frontmen this season. And so, of those to score three or more goals, below are the top ten strikers with the best conversion rate…

10) Sam Vokes – Burnley (Conversion Rate 17.4%)
Sam Vokes netted early on in Burnley’s entertaining 3-2 win over Crystal Palace at the weekend to bag his fourth league goal of the season. The Wales frontman has now been directly involved in four goals in his last four top-flight appearances, while an average of 2.1 shots per game means the 27-year-old has garnered a respectable conversion rate of 17.4%.

9) Sergio Aguero – Manchester City (18.2%)
Despite missing three domestic games through suspension, Aguero has still bagged eight league goals this season (and 25 in 2016), a returned bettered only by Diego Costa (9). The Argentine is averaging the second most shots per Premier League game this campaign (4.9), and it’s evidently paying dividends given his goal return and a conversion rate of 18.2%.

8) Troy Deeney – Watford (18.8%)
The goals have dried up for Troy Deeney of late as he struggles to net his 100th goal of his Watford career. Nevertheless, having scored three times from just 16 shots in England’s top tier this term, the Hornets captain has as conversion rate of 18.8%, one of the better returns in the Premier League this campaign.

7) Alexis Sanchez – Arsenal (18.8%)
Alexis Sanchez has been routinely deployed as the lead frontman for Arsenal this season and Arsene Wenger has been rewarded for his show of faith in the Chilean. The 27-year-old has scored more goals (6) than any other Arsenal player to return a WhoScored.com rating of 7.78, while a conversion rate of 18.8% is also notable and all the more impressive considering his debut campaign returned a conversion rate of 13.2%, while that figure last season dropped to 12.1%.

6) Jermain Defoe – Sunderland (19.4%)
Sunderland have scored just nine league goals this season, six of which have been netted by star striker Jermain Defoe. Without his goals, the Black Cats would be in a far more perilous position, but fortunately for the club, Defoe’s knack for goals hasn’t deserted him. Indeed, a conversion rate of 19.4% is impressive for a player who has had 31.6% of Sunderland’s 98 league shots this term, the second-lowest return of teams in the top flight of English football.

5) Kelechi Iheanacho – Manchester City (20%)
Since making his Premier League debut last season, Kelechi Iheanacho has scored 11 goals from his 17 shots on target. The Nigerian is lethal in front of goal, of that there is no doubt, and it’s little shock then that one of his six statistically calculated WhoScored.com strengths is ‘finishing’.

4) Harry Kane – Tottenham (20%)
Harry Kane’s equaliser for Tottenham in Sunday’s 1-1 draw with Arsenal means the England international has scored five goals in four north London derbies in England’s top tier. The strike from the spot was also Kane’s third this term, and they have come in his last four league appearances either side of injury. The number of shots per game may have dropped from 4.2 to 2.5 from last season to this, but the 23-year-old is still proving effective in the opposition box, having mustered a 20% conversion rate. 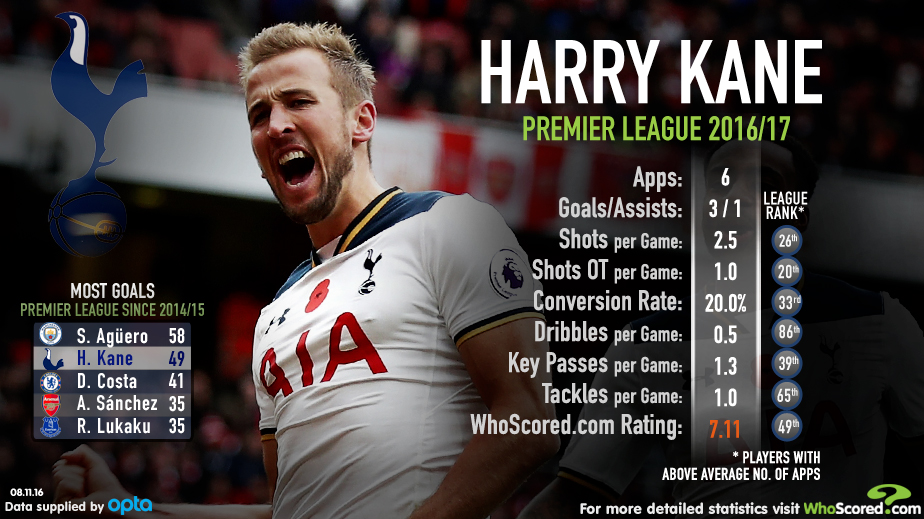 3) Romelu Lukaku – Everton (24.1%)
Everton endured an embarrassing 5-0 thumping at the hands of Chelsea on Saturday evening as Romelu Lukaku failed to enjoy a goalscoring return to Stamford Bridge. Nevertheless, the Belgian has impressed once more this campaign, netting seven goals from his 10 appearances, while a 24.1% conversion rate means Lukaku is just shy of scoring with one of every four shots.

2) Diego Costa – Chelsea (24.3%)
The Premier League’s top goalscorer with nine goals to his name, Diego Costa has looked back to his best for the Blues following a summer of speculation linking him with a move away from Stamford Bridge. Not only that, but an average of 3.4 shots per game, a relatively modest return for the striker, means the Spain international boasts an exemplary conversion rate of 24.3%, similar to the one he had in Chelsea’s title-winning campaign.

1) Islam Slimani – Leicester (30%)
Leicester were one of 13 Premier League teams to break their club-record transfer over the summer and did so on three occasions, with Islam Slimani’s deadline day arrival costing the Foxes £28m. The Algerian hasn’t disappointed thus far with three goals from six league appearances this season (making it 23 league goals in 2016). Brought in largely to bring others into play, the 28-year-old hasn’t underwhelmed when required to do the business himself, with a conversion rate of 30% the best of strikers to score three or more league goals this season.