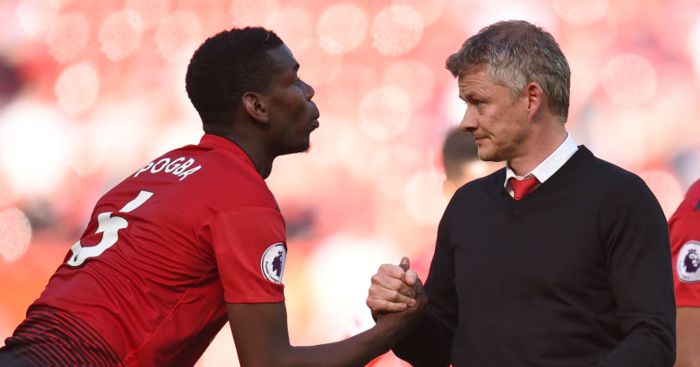 The limited success Ole Gunnar Solskjaer has enjoyed at Manchester United this season has been characterised by a solid defence and blistering counter-attacks. And with the imminent return of Paul Pogba, the United boss has to decide whether he can fit the World Cup winner into his current formation, or rip up his blueprint to cater for his best player, and risk stunting the burgeoning progress he’s making at Old Trafford.

Despite endless and tiring speculation over a move away, Pogba is still a Man Utd player, and is set to return to training on Wednesday, with an ‘insider’ at the club claiming Solskjaer wants to reintroduce him to first-team action in the derby against Manchester City on December 7. While the thought of having your best player available after a long stint on the sideline would be a boost to any manager – particularly one under such extreme pressure – Solskjaer will rightly be nervous about the return of his star midfielder.

There is little doubt that he will play. The majority of the criticism aimed at United this season has focused on an inability to create and break teams down when they sit back and defend. Pogba has proven – in spite of major deficiencies in other aspects of his game – that he can create and score goals. Solskjaer’s sleepless nights will instead stem from the question that could make or break United’s season and either prolong or limit his own future: Where do I play him?

In Solskjaer’s favoured 4-2-3-1 formation, Pogba’s most ‘natural position’ – judging by where he has appeared most often for United – would be as part of the midfield two, in place of either Fred or Scott McTominay. It’s a position that suits Pogba’s game when he has the ball, driving from midfield and spraying passes to Marcus Rashford and Anthony Martial, breaking through the lines from a deeper lying position. But doesn’t suit him when he’s tasked with the defensive duties this team requires. United don’t monopolise possession and are far more dangerous when they don’t have the ball but could steal it, than when they have it for any length of time. It was perfectly illustrated in their 3-1 win at home to Brighton, in which they had just 42% possession but were worthy winners with 21 shots to six. They embraced a style of play that again could suit Pogba, for the reasons outlined above, but doesn’t, because he’s sh*t at defending. Which is a problem for a team who – at the moment – rely so heavily on being able to shut other teams out.

Tracking back, picking up markers, closing down – you name it, he’s sh*t at it. He’s also dispossessed a lot (2.5 times per 90 minutes last season, 7th most in the Premier League), owing to his desire to dribble in unfavourable positions. Fred, meanwhile, is starting to look comfortable alongside McTominay in that holding position, with the partnership providing an effective screen in front of a much improved United defence. And while United’s current midfield duo are unsexy but stable, Pogba is akin to Tom Cruise in the sexiness/stability stakes. Sexy? Sure, but his defensive will and know-how is as questionable as his Hollywood counterpart’s belief in the madness of Dianetics and Scientology.

The people have spoken. When Pogba gets back, let’s get him doing this again 😍 #MUFC pic.twitter.com/jZvJtZF4FA

So play him in place of Pereira at number 10 – they all shout. And this would be the better option. Pereira has featured in all but one of United’s Premier League games this season, starting ten of the 12, and has done little to merit his place in any of those games with just one goal and one assist, and a woeful pass completion rate of just 73.3%. What he does do – more than Pogba – is press and close down opposition defenders, but Solskjaer will surely value the Frenchman’s creativity over Pereira’s lung capacity as he searches for the long-awaited, multiple false-starting return to the Manchester United DNA.

Can Pogba provide the genetic modification required to return to those halcyon days? Of course he can; he’s a ludicrously talented footballer. But it’s Solskjaer’s decision as to where and how to utilise his prized asset that will determine whether Pogba’s return is met with a sigh of relief, as United score more goals and climb the table, or lead to the search for a new manager, as their defence crumbles and Solskjaer is handed his P45.