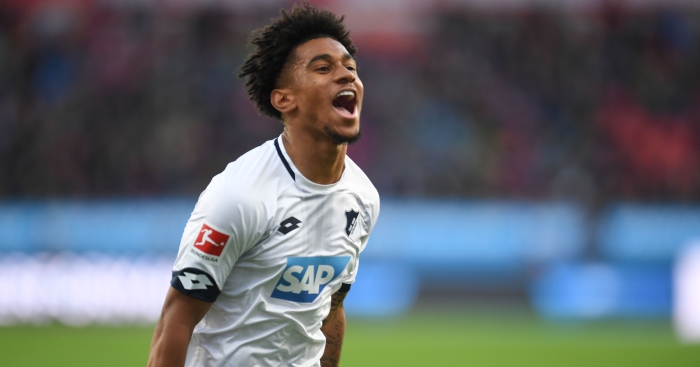 ARSENAL: Reiss Nelson (Hoffenheim)
On Monday the German magazine Kicker named their six best players of the Bundesliga season so far; it contained two English teenagers. Alongside Jadon Sancho (one of the season’s best Englishmen and a new England cap) was Reiss Nelson, on loan from Arsenal and scorer of five Bundesliga goals in just 317 minutes of football. He has also scored in both his England Under-21 appearances this season. Oh and he is just 18. Wow.

BOURNEMOUTH: Harry Arter (Cardiff City)
You don’t get players like that on loan unless there’s something in their make-up,” said Neil Warnock last month as he despaired at the midfielder’s disciplinary record. “Eddie did warn me, he said he’d get booked in training.” But the truth is that if Cardiff are to stay up this season, they need Arter; no Bluebirds’ player has pulled off more successful tackles than the Irishman despite the fact that he has missed two games.

BRIGHTON: Percy Tau (Saint Gilloise)
The South African international is operating in the second tier of Belgian football this season and is fast becoming a fan favourite for his promotion-chasing side. He has scored three goals and assisted four more in the Proximus League, while he also featured in a historic 3-0 cup win over Anderlecht. “It’s been difficult in some aspects, but overall not so bad,” said Tau, who will hope to secure a work permit to play for Brighton next season.

Percy Tau scored Union Saint-Gilloise’s second goal tonight – his third of the season – as they remained second in the Proximus League with a 2-0 victory over Beerschot Wilrijk. 🇿🇦⚽️ pic.twitter.com/6D60W4YiQY

BURNLEY: Jimmy Dunne (Hearts)
While Burnley are shipping goals for fun in the bottom reaches of the Premier League, they have a 21-year-old Irish defender playing at centre-back for the current leaders of the Scottish Premiership. Former Manchester United youth player Jimmy Dunne has never even played for the Clarets, but his form for the Edinburgh side has just earned him a first call-up by Martin O’Neill. He is understandably desperate to stay there beyond his current loan spell.

CARDIFF CITY: Rhys Healey (MK Dons)
It might only be League Two, but five goals in 11 games for the 23-year-old is a great haul that might prove useful when Cardiff are inevitably relegated back to the Championship. “I’ve always said double figures, but I’m here until January so I hope for 12 at least,” he said when asked about a target for the season. “For the season, I’d want 15 to 20. It’s a big target but hopefully I can get near it.” He is certainly faring better than Omar Bogle.

Fuck Neymar, I get to watch Rhys Healey every week

CHELSEA: Mason Mount (Derby County)
“Mason Mount is the one they are talking about at Chelsea, out of the 35 loaned players he’s the one they expect to come back and play here,” said Jimmy Floyd Hasselbaink last week as Mount took on his parent club Chelsea in the Carabao Cup. And promptly assisted the equaliser.

The goals and assists have dried up for Mount in the Championship – he has claimed neither since September – but his form earned him an England call-up from the second flight, thus vindicating his decision to stay under the noses of the Blues in England rather than return to the Netherlands.

CRYSTAL PALACE: N/A
We seriously cannot make a case for Jaroslaw Jach, Ryan Inniss, Jordon Mutch or Jason Lokilo. Astonishingly, not even Jonny Williams is on loan anywhere this season.

EVERTON: Nikola Vlasic (CSKA Moscow)
He scored the winner against Real Madrid in the Champions League. If that was all he had done this season, then he would still be on this list. But he also has three goals for CSKA Moscow in the Russian league. They love him. Oh and he has had a recall to the Croatian national team based on his astonishing form. Theo Walcott should be worried.

Nikola Vlašić named #CSKA Player of the Month for the second time in a row https://t.co/o7w1XagIhe pic.twitter.com/mBgGLlTU2A

FULHAM: Marek Rodak (Rotherham)
While Fulham are struggling despite using three different goalkeepers this season, Slovakia Under-21 stopper Marek Rodak has been making friends in Rotherham, where he has conceded just 22 goals in 15 Championship games. He made a string of fine saves as the Millers pulled off an unlikely victory over Swansea last weekend.

HUDDERSFIELD TOWN: Joel Coleman (Shrewsbury Town)
Two weeks ago, things were going a little better for goalkeeper Coleman, who had conceded just 16 goals in 15 League One games. And then he let in three goals against Oxford United and was dropped for this weekend’s clash with AFC Wimbledon. The Shrews won that one 2-1 so he might be stuck on the bench for a while. Still, it could be worse; he could be Jack Payne and be at Bradford.

LEICESTER CITY: Filip Benkovic (Celtic)
He cost £13m so he should be decent. But he is more than decent and the 21-year-old has been imperious in successive 5-0 wins in the Scottish Premiership. He even scored a goal against Hearts at the weekend. “The feeling is very good,” he said. “When you play in this team, you feel proud. There are some big players and I can learn a lot from them. They have a lot of experience.” Move aside Wes Morgan?

Has Filip Benkovic ever lost a header in his life?

LIVERPOOL: Harry Wilson (Derby)
“Liverpool fans shouldn’t worry because hopefully we’ll give them a very good Harry Wilson when he goes back,” said Derby boss Frank Lampard after the young Welshman scored stunning free-kicks for club and country against Manchester United and Ireland last month. On Saturday against Birmingham he claimed his third Championship goal of the season. And he doesn’t score tap-ins.

1. A cylindrical projectile that can be propelled to a great height or distance by the combustion of its contents

MANCHESTER CITY: Thierry Ambrose (Lens)
You might not know the name but Ambrose is a 21-year-0ld French winger who had an excellent scoring record for Manchester City’s youth sides before heading to Lens on loan. There he has scored four goals and assisted three more as Lens push for promotion back to Ligue Un. He is probably enjoying himself more than Patrick Roberts, who is very much playing a bit-part role for Girona.

Thierry Ambrose (on loan at RC Lens) when asked if he's ready to leave City if he can't break in to the team:

“Yes of course. City is always in my head. But as I’ve always said, if it’s not in Manchester City, it will be elsewhere. I still belong to this club, so we’ll see.” pic.twitter.com/9fM8GGDJO1

MANCHESTER UNITED: Dean Henderson (Sheffield United)
Making the move to Bramall Lane has been the making of Henderson, who has established himself as first choice for promotion-chasing club and Under-21 country. They love him and he loves it at Sheffield United, saying recently: “This is the first really big club for me, with a really big fan base, and the atmosphere at our place gives me goosebumps every time. They are memories that will live with you for the rest of your career.” He’s ready for Friday’s derby…

NEWCASTLE UNITED: Dwight Gayle (West Brom)
When you send somebody out on loan who scored more goals than your entire team, then questions will inevitably be asked. Like ‘why on earth did Newcastle let Dwight Gayle go on loan to West Brom?’, which was posed by Jamie Redknapp last month. To which the answer is obviously ‘he’s a Championship striker and has never scored more than seven goals in a Premier League season’. Still, he is doing well. Which is nice.

SOUTHAMPTON: Sofiane Boufal (Celta Vigo)
“I like to be part of a team that plays football well and Celta knows how to do it,” says Sofiane Boufal, who is on the verge of a Morocco recall after losing his international place following a fall-out with Mark Hughes at Southampton. While the Saints struggle for goals, Boufal is second only to Lionel Messi in La Liga in terms of key passes per 90 minutes. It’s worth remembering that he cost Southampton a cool £17m, and Hughes thought ‘nah, Stuart Armstrong will be better’.

TOTTENHAM HOTSPUR: Samuel Shashoua (Atletico Baleares)
With Marcus Edwards struggling in the Netherlands, we look instead to England youth international Shashoua, who has scored three goals and claimed two assists while on loan in the Spanish third flight. He is just 19. How much fun must he be having in Majorca? More fun than Josh Onomah in Sheffield, we wager.

Samuel Shashoua continues his fine form in Spain. He picks up the assist on Atlético Baleares's first goal with this well placed cross at the back post. That makes 3 goals and 2 assists in the last 6 matches. The Balearicos would go on to beat Espanyol B 2-0.#USMNT pic.twitter.com/85z9SiVb0x

WATFORD: Sulayman Marreh (Eupen)
What do you mean, you have never heard of Sullayman Marreh? He has 13 international caps for The Gambia at just 22 but has obviously never actually played for Watford. But he is playing as a defensive midfielder under the management of Claude Makelele at Eupen and that can only ever be a good thing.

WEST HAM: Josh Cullen (Charlton)
“He’s better than I was [at that age],” said Charlton boss Lee Bowyer in September of the current Republic of Ireland Under-21 captain. This is Cullen’s third loan spell away from West Ham and it might well be his last; Manuel Pellegrini is going to need a long-term replacement for Mark Noble. “I thought I needed to be playing and he agreed,” said Cullen of his conversation with the Chilean. “I can’t thank him enough for supporting me and making me feel at ease. He told me to go out, enjoy my football and improve and, hopefully, I’ll return to West Ham a better player for him.”

WOLVES: Rafa Mir (Las Palmas)
He arrived at Wolves in January from Valencia B after scoring 15 goals in the first half of the season, but make no real impact in the Midlands. Sent back to Spain on loan – this time to the second tier – has certainly worked for Mir, who has scored four goals in ten games. Oh and he has scored five goals in just 146 minutes for the Spanish Under-21 side. Which makes him sound very tasty indeed. Tasty enough to sell for £6m according to reports in Spain.