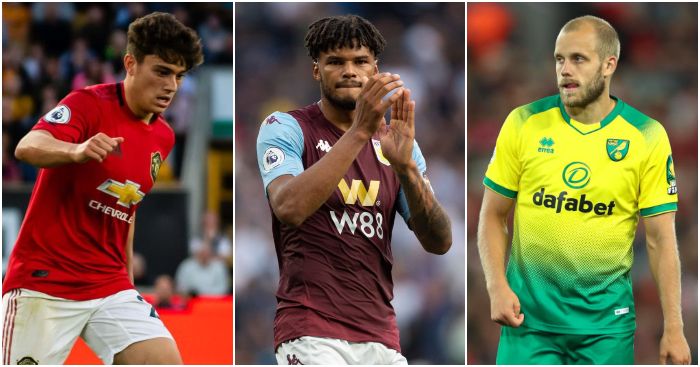 Who’s got a touch worse than Andy Carroll? Who’s made twice as many clearances as Harry Maguire? Which fouler and ‘foulee’ are meeting this weekend? Here are your Premier League stats after week two. The numbers are totals after two games.

Shots off target – James Maddison (5 out of 6)
He might not be David Bentley, but he does like to slash an effort wide.

Total tackles – Aaron Wan-Bissaka (15 out of 17)
The most predictable stat on the list. The kid loves a tackle. And Manchester United fans love him already

You might notice a lack of defenders from the top 6 teams in the top 5 list for tackles so far this season, there’s a reason for that. https://t.co/jkhxhtR3Mi pic.twitter.com/O1LlvNqBwq

Most interceptions – Fabian Schar and Wilfred Ndidi (9)
Two of the most underrated footballers in the Premier League. Philip Billing has seven in 130 minutes – a good start after his move to Bournemouth.

Most fouls – Luka Milivojevic (10)
A foul every 18 minutes, four more fouls than anyone else. Milivojevic is always either fouling someone or banging in a penalty.

Most fouled – Daniel James (8)
He has obscene pace. Milivojevic v James on Saturday – could be tasty.

Tyrone Mings whenever a ball comes into the box pic.twitter.com/Kz7bdvW2DR

Successful dribbles – Ricardo Pereira (9 out of 13)
Christian Pulisic completed just four of the 12 dribbles he attempted. Eden Hazard completed 137 out of 204 last season – big (or quick) shoes to fill.

Unsuccessful touches – Joelinton (12)
Apparently this is what you get for £40million these days. Who’d have thought Andy Carroll would be the striker at Newcastle with the most reliable first touch?

Dispossessed – Emiliano Buendia (10)
A beautiful assist at Anfield but the young Argentine could create even more if he kept hold of the ball.

Most chances created in the Premier League after matchday two:

Aerial duels lost – Troy Deeney (25 out of 41)
This also means he has won 16 duels – which is the second highest… Does Troy ever get a ball to feet?

Most passes – Toby Alderweireld (164)
Jorginho has a measly 108 in his two games so far – a poor showing from the ‘pass master’.

Key passes – Kevin De Bruyne (12)
The assist leader with three – KDB should have had at least a couple more in the Spurs game alone with his right foot wand.