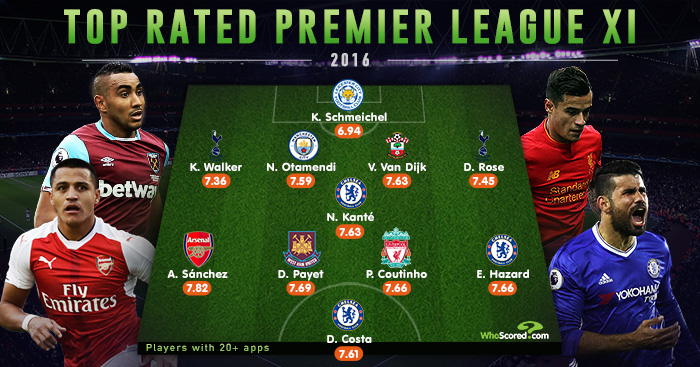 Mersey Monday is finally over, and Christmas is upon us. Chelsea top the table, while Sunderland, Swansea and Hull occupy the relegation places. Now is the time to take stock of an eventful year and take a closer look, as WhoScored.com present their Premier League team of 2016 of those to make 20 or more appearances over the calendar year.

GOALKEEPER: Kasper Schmeichel – Leicester (WhoScored.com rating 6.94)
The Premier League-winning goalkeeper understandably tops the list having starred for Leicester as they ended top of the pile back in May. Schmeichel’s save success rate (77.9%) is the best of any keeper to make 20 or more appearances this calendar year. And he has won more Premier League winners’ medals than you.

RIGHT-BACK: Kyle Walker – Tottenham (7.36)
England’s starting right-back, and for good reason, Kyle Walker’s inclusion should come as little shock. Now considered by many as the best in his position in England’s top tier, the 26-year-old has starred under Mauricio Pochettino in 2016, with an average of 2.8 tackles and 2 interceptions per game. Only Christian Fuchs (52) played more key passes than Walker (46) of all defenders this year as the Spurs man thrived for the north London side.

CENTRE-HALF: Nicolas Otamendi – Manchester City (7.59)
Manchester City’s defence may require strengthening at the next possible opportunity, but the backline is more solid when Nicolas Otamendi is available. The Argentine is the no-nonsense defender most Premier League teams require; he’s made the fifth most tackles and interceptions combined (196) in 2016. Only three centre-backs have played more accurate passes (1,376) this calendar year.

CENTRE-HALF: Virgil van Dijk – Southampton (7.63)
One of the Premier League’s best defenders – of that there is no doubt – Virgil van Dijk is an unsurprising choice having shone for Southampton over the last 12 months. He’s made the third most clearances (275) and second most headed clearances (175) in the Premier League in 2016. He has won seven WhoScored.com man of the match awards so far this year. He even finished eighth in Football365’s top ten players of 2016, and there is no greater honour than that.

LEFT-BACK: Danny Rose – Tottenham (7.45)
Making up the other half of arguably the Premier League’s strongest full-back pairing, Danny Rose, like Walker, has enjoyed a superb 2016 under Pochettino at White Hart Lane. His offensive output is among the best in the division, with Christian Fuchs (nine) the only defender to create more clear-cut chances than Rose’s six. Three tackles per game ain’t too shabby, either.

CENTRAL MIDFIELDER: N’Golo Kante – Leicester/Chelsea (7.63)
N’Golo Kante’s fine form for Leicester earned him a big money summer switch to Chelsea, and few will argue that he did not deserve it. No player has won possession in the midfield third more times than the Frenchman (167) in 2016, while only Idrissa Gueye (291) has made more tackles and interceptions combined than Kante (279) this calendar year.

LEFT-WINGER: Alexis Sanchez – Arsenal (7.82)
The Premier League’s highest-rated player in 2016 with a WhoScored.com rating of 7.82, Alexis Sanchez is Arsenal. Only Christian Eriksen (86) has played more key passes from open play than the Chilean (79) in 2016, and there is no wonder that the Gunners are striving to tie him down to a new long-term deal. He’s completed 100 dribbles, registered nine assists and scored 19 league goals this year and is comfortably Arsenal’s most important player.

ATTACKING MIDFIELDER: Dimitri Payet – West Ham (7.69)
On the back of a superb Euro 2016 campaign, many West Ham fans feared that Dimitri Payet would engineer a move away from West Ham in the summer. They can count their blessings the Frenchman didn’t look to force an exit, as he has played more key passes (135), created the joint-most clear-cut chances (15) and won more WhoScored.com man of the match awards (nine) than any other Premier League player in 2016.

ATTACKING MIDFIELDER: Philippe Coutinho – Liverpool (7.66)
There’s no denying that Liverpool’s attack is stronger with Philippe Coutinho available. The Brazilian’s willingness to go for goal from distance has seen him score more goals from outside the box (five) than any other player in 2016, with his influence alongside Roberto Firmino and Sadio Mane helping forge arguably the most fluid attack in the Premier League.

RIGHT-WINGER: Eden Hazard – Chelsea (7.66)
Antonio Conte’s appointment as Chelsea manager has seen Eden Hazard return to his peak in a Blues shirt and after ending the 2015/16 campaign strongly, the Belgian has maintained his fine form this season. He ranks third for dribbles (105) in 2016, while only Wilfried Zaha (97) has been fouled more times than Hazard (83) in the Premier League this year.

STRIKER: Diego Costa – Chelsea (7.61)
With Diego Costa suspended for Chelsea’s Boxing Day meeting with Bournemouth, and a possible doubt for the welcome of Stoke, the striker’s year could already be over. He started 2016 by scoring in a win at Crystal Palace and may be ending the calendar year in the same vein having netted in a victory at Selhurst Park. He’s been directly involved in more goals (30 – 20 goals, ten assists) than any other Premier League player in 2016.