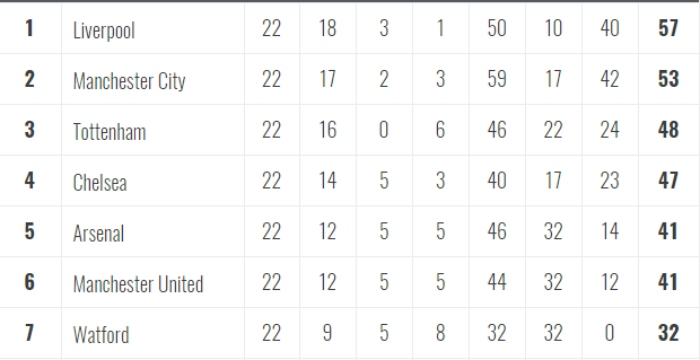 It went almost unnoticed, as it always does, in early December when the Premier League’s Big Six finally established themselves as the best six this season. Despite a patchy start, a 4-1 win for Manchester United against Fulham was enough for them to jump up to sixth, completing the set and leapfrogging perennial pretenders Everton.

Sixteen games and just over three months into the season, the uppermost section of the league was closed off to 14 out of 20 clubs. Manchester United, the lowest of the Big Six but emboldened by a change of manager, confirmed that with a run of form that saw them turn a two-point gap on December 22 into a nine-point chasm by mid-January.

The strength and quality of Arsenal, Chelsea, Liverpool, Manchester City, United and Tottenham means they will not be caught from here. Meanwhile, the Bundesliga will soon return from their winter break with unfashionable Borussia Mönchengladbach up from ninth last season to third this, with a Wolfsburg side who required a play-off to stay up in 2017/18 now a respectable fifth.

Yet the myth of the competitiveness of the Premier League persists, usually on the back of the latest Big Six meeting or rare instance of an outsider snatching victory over one of their bigger brothers. The reality is a league split into three parts, with a mid-table muddle and a relegation rabble left scrapping for places. The annual £94m-plus handouts have become a significant raison d’etre.

The greatest league in the world has already been reduced to a ‘title race’ of two rich yachts jostling for position in the elite marina while the locked-out plebs watch on from the gates.

The people purporting this competitive myth are normally the ones that rely on the Premier League machine for a living, those who exist in a state of almost permanent selective amnesia.

Jonathan Clegg’s recent book ‘The Club’ points out how influenced the nascent Premier League was by the NFL. But England’s top flight didn’t stretch to adopting sporting integrity measures like a salary cap and pooling of merchandise revenues. Instead, the Premier League went its own way with a conflicted hybrid free-market/structured model based on the distribution of TV revenues that has disrupted the sporting balance of English football. UEFA’s latter-day Financial Fair Play code is not worth the paper it is written on, as the Football Leaks revelations have shown. The Premier League dishing out millions in central payments has created a culture of waste and reliance among the 14 ‘other’ sides; a debt mountain of gamblers continues to build in the Championship while the sport wrestles with a grassroots crisis.

In America there have been nine different winners of the NFL Superbowl in the past ten years, with just four unique champions of the Premier League over the same period. Only Leicester City in 2015/16 temporarily broke the monopoly the bigger sides have over the biggest trophy.

In many ways, Leicester winning the title was the worst thing that could happen; it shook an under-performing Big Six from its collective stupor, and gave the outsiders false hope that they could become long-term insiders. None have even got close since; the sides in seventh have finished 32 and 46 points behind the champions in the two seasons since.

With Brexit presenting the possibility of quotas for young English players, it could have a reinvigorating effect on the top flight by incentivising academy strength over financial muscle. But the Premier League is seemingly balking at the idea, resisting the FA’s minor reform proposals.

Yet the fact that the Premier League is without a title sponsor or chief executive may suggest that the lack of sporting vibrancy in the league is being registered in the wider football industry. Both Susanna Dinnage of the Discovery Channel and Tim Davie of BBC Studios have turned down the top job at Gloucester Place. It may prove difficult to connect the vibrant world of TV where new narratives are currency with the listless, unmodern, predictable supremacy of the Big Six.