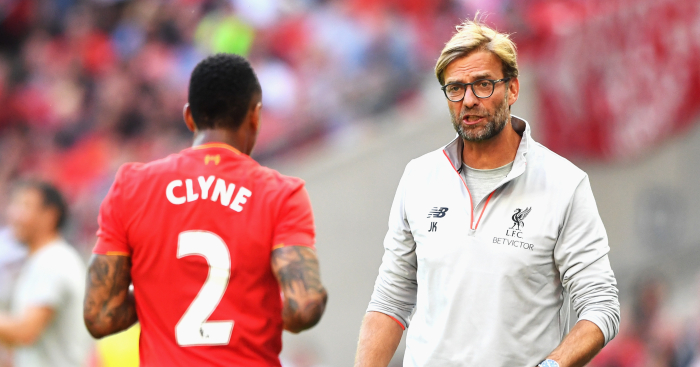 As a bonus, we will take a look at where last year’s forgotten men are now…

ARSENAL – Matt Macey
Now 25 years old, he played the last of his two (unbeaten) games for Arsenal over two years ago. He is surely now too long in the tooth to be playing for Arsenal’s Under-23s; the clue is in the name. There comes a point when you are both too old and too young to be a third-choice goalkeeper and that point has arrived for Macey.

How the fuck is Matt macey still an arsenal player

ASTON VILLA – Keinan Davis
There were a few hours on Monday between the sale of Jonathan Kodjia and the arrival of Mbwana Samatta when 21-year-old Davis might have rushed his return from a hamstring injury to become Aston Villa’s first-choice striker. He did actually play 74 minutes across six substitute Premier League appearances at the start of the season but he is unlikely to make the highlights reel if Villa survive.

BOURNEMOUTH – Brad Smith
The worst example of Eddie Howe’s dangerous addiction to Liverpool squad players, Australian left-back Smith is back from a loan spell in Seattle and the Bournemouth manager is pretending that he might be part of his plans, saying: “He’s back with us. He’s training with us, so he’s a welcome addition to the squad.” In reality, his last Premier League appearance (in a 6-3 defeat) came three years ago.

BRIGHTON – Beram Kayal
Five years after his arrival from Celtic on a free transfer, Israeli international midfielder Kayal is back at Brighton after an ill-fated loan spell at Charlton that saw him play 211 minutes across six Championship games before succumbing to injury. He is out of contract in the summer; Graham Potter is unlikely to miss him.

Last year’s man: Ezequiel Schelotto has been re-integrated and has actually made four Premier League appearances this season.

BURNLEY – Ben Gibson
He cost £15m but Sean Dyche is not for shifting from his beloved central defensive duo of Ben Mee and James Tarkowski (23 starts each in 23 Premier League games) and Gibson’s role is seemingly to alternate a spot on the bench with Kevin Long. His only Burnley appearance of the season came in Carabao Cup defeat to Sunderland. The smart money is surely on a return to the loving arms of Uncle Steve at Middlesbrough.

CHELSEA – Marco van Ginkel
Three surgeries in six days in 2018 left the Dutch midfielder understandably “depressed” but he is now back in training at Chelsea. He is dreaming of a first Blues appearance since September 2013, when he made the fourth of his four appearances following his £8.5m move from Vitesse and before loan spells at AC Milan, Stoke and PSV brought mixed fortunes.

Congratulations to Marco van Ginkel, who has captained PSV to the 2017-18 Eredivisie title. #CFC #LoanArmy

CRYSTAL PALACE – Stephen Henderson
Genuinely forgot about his existence. The Irish goalkeeper joined last summer from Nottingham Forest but has not made a single appearance in any competition this season. Indeed, it’s been almost three years since he has played at any level higher than League One.

EVERTON – Cuco Martina
Duncan Ferguson found the Curacao international down the back of the sofa for a Premier League bench appearance in December, but it was his first involvement in a match-day squad since the end of the 2017/18 season. With Seamus Coleman, Djibril Sidibe, Leighton Baines and Lucas Digne forming a foursome of full-backs, Martina could depart in the summer without playing another minute.

LEICESTER – Eldin Jakupovic
The poor lad has not even made a Premier League bench after being usurped as Leicester’s second-choice keeper by the needless and expensive signing of Danny Ward in 2018. The former Hull hero has made a grand total of four appearances in two-and-a-half years for the Foxes.

LIVERPOOL – Nathaniel Clyne
“Clyney is in a good way but unavailable,” said Jurgen Klopp this week as he provided an update on the right-back sidelined by cruciate ligament injury. How frustrating to be a Liverpool player in this golden era but play no part in the success. This time last year he was heading to Bournemouth on loan and there has been talk of a West Ham spell as he nears full recovery.

Back problems never really go away. Ask anyone who suffers from it.

You don’t believe me? Just look at what happened to Nathaniel Clyne. A cautionary tale.

MANCHESTER CITY – Mix Diskerud
Who? Well he is the US international midfielder signed by Manchester City (announced by Umbro) two years ago, with no view to him ever actually playing for City. But he is back at the club after a loan spell in Korea with Ulsan Hyundai while somebody looks for another potential loan club somewhere in the world.

Last year’s man: Eliaquim Mangala is on the fringes of the Valencia squad.

MANCHESTER UNITED – Cameron Borthwick-Jackson
Recalled by United after the latest in a series of poor loan spells – this time at Tranmere – Borthwick-Jackson may well spend the last few months of his contract at Carrington as an extra body in training drills. His last Premier League appearance came in the final days of the 2016/17 season when Jose Mourinho was putting all his eggs in the Europa League basket. So he may yet have a chance…

Obviously @MarcusRashford being out is a blow but we won’t be hitting the panic button to replace him. We have Greenwood, Martial and James. Also don’t forget our exciting wildcard Cameron Borthwick Jackson ! #mufc #Rashford

Last year’s man: Marcos Rojo is still at Manchester United (just about) and featured in the Premier League as recently as November.

NEWCASTLE UNITED – Henri Saivet
“He’s available and he needs to go and play somewhere,” says Newcastle boss Steve Bruce, who could not use the Senegalese midfielder even if he wanted; he is not in their 25-man Premier League squad. Instead, he just turns up to work and collects his £35,000 a week. Eight games in four years, in case you were wondering.

Last year’s man: Rolando Aarons is back at Newcastle after a successful loan spell at Wycombe.

NORWICH CITY – Timm Klose
The big Swiss centre-half has missed almost the entire season with a knee injury. And it’s a season when injuries have left Daniel Farke no choice but to raid his central midfield for central defensive options. Missed by Norwich but forgotten by the rest of us.

SHEFFIELD UNITED – Ravel Morrison
“I see him as a successful signing,” said Chris Wilder this month. Well the bar must be bloody low as Morrison has played just 12 minutes of Premier League football and has not even been on a top-flight bench since September. He did play the full 90 minutes against AFC Fylde in the FA Cup so maybe he is the future of football after all…

SOUTHAMPTON – Josh Sims
The Saints Academy graduate appeared to have a bright future when he enjoyed a run of games last April but instead he headed for NY Red Bulls on loan before returning to a Southampton side that no longer requires his services. Another loan – to New York, Sheffield or Huddersfield – beckons. No-brainer.

TOTTENHAM – Cameron Carter-Vickers
Before there was Japhet Tanganga there was Carter-Vickers, who was playing in the FA Cup for Tottenham as a 19-year-old just three years ago. But he has not played for Spurs since, enjoying loan spells at Sheffield United, Ipswich, Swansea and Stoke. He has been recalled from the latter, reportedly so they can charge Derby £4m for his services.

Cameron carter vickers just 22. Has 87 senior appearances 8 international caps. Stoke was bit of a disastrous loan for him. Shame totally fallen off the radar. Only a year older than Tanganga I doubt too many would have foreseen Tanganga having the brighter future 2 years ago 🤷🏻‍♂️ pic.twitter.com/vRrjzIFJD4

WATFORD – Marvin Zeegelaar
Two years since he last played for Watford, the Dutchman is still somehow on their books – not wanted by any of their three managers this season. And his contract does not expire until NEXT year. The smartest of all money is surely on a loan move to Udinese.

Last year’s man: Jerome Sinclair is in and out of a struggling VVV Venlo side on loan.

WEST HAM – Winston Reid
The New Zealandish centre-half has not played since March 2018 after sustaining a serious knee injury, though he has made it as far as the bench in recent weeks. It was five years ago when he was being linked with Manchester United, Arsenal and Liverpool and Sam Allardyce said: “He has no future at this club. I’ve been in the game long enough to know that he’s leaving at the end of the season. (It’s) highly unlikely that he’ll stay.” He did. And he’s still there.

WOLVES – Jordan Graham
The fans thought he had joined Lokomotiv Plovdiv on loan until he appeared on the bench for Wolves Under-21s in the Leasing.com Trophy in November. He is 24. Which tells you all you need to know about Graham’s standing at Wolves. And he had started so well under Kenny Jackett so many, many moons ago.