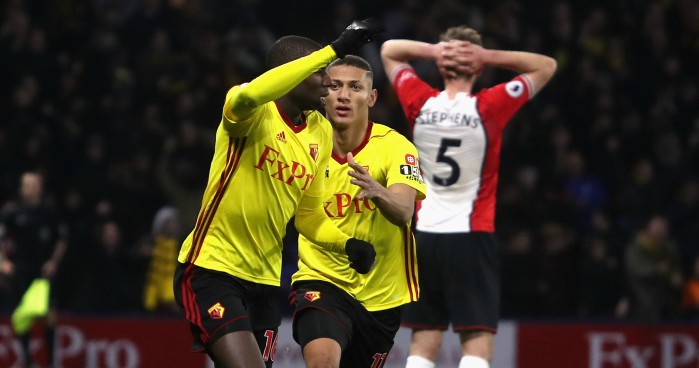 Goalkeeper: Nick Pope (Burnley)
With Manchester City’s Ederson having one full Brazilian cap (and clean sheet, obviously), this was down to a straight save-off between West Ham’s Adrian and Burnley’s Nick Pope, who wins by dint of being quite a bit better this season. He might owe a great deal to a deep defence restricting shots to long distances and tight angles, but he has acquitted himself incredibly well. So well, in fact, that he may not be uncapped beyond Tuesday.

Right-back: Trent Alexander-Arnold (Liverpool)
Absolutely only a matter of time for TAA, who started Liverpool’s last-16 first leg against Porto as well as five of their last six Premier League games. Unfortunately for Alexander-Arnold, he shares a Liverpool right-back slot with Joe Gomez, who offers the added bonus of being able to play centre-half. For now, he is an England Under-21 man, which at 19 is absolutely fine.

Centre-half: Christopher Schindler (Huddersfield Town)
“I would like to be Löw’s World Cup surprise,” said Schindler in February, but even he had to admit he is “very far away” even after an impressive season in the Premier League. For this is his very first top-flight season, having picked up a handful of Under-21 caps while in Germany’s second tier. It really would be a surprise.

Centre-back: Jamaal Lascelles (Newcastle United)
There’s a fair bit of whimsy in this list, but Lascelles can feel genuinely aggrieved to be here. England are still striving for the right defensive balance but are yet to call upon a man who has been among the league’s biggest difference-makers this season. It’s difficult to understand why Alfie Mawson gets the call and Lascelles stays at home.

Left-back: Marcos Alonso (Chelsea)
Sat on the bench as Spain looked impressive against Germany on Friday night, but he won’t mind; this has been a long time coming. “Whether it’s late or not, the important thing is that I’m here,” said Alonso, who is hoping to follow his grandfather and father into the record books as a full Spain international. This kind of honour must have felt like an awful long way away when he was on loan at Sunderland.

Central midfield: Oriol Romeu (Southampton)
His then-Southampton boss Claude Puel said last year that he was good enough to play for Spain, but Romeu has edged back under the radar again since then and he seems as far away from a Spain call-up as ever. New central midfield call-ups are not out of the question but Daniel Parejo and Rodri have proved this week that they are well ahead of honest Premier League relegation battlers like Romeu.

Central midfield: Abdoulaye Doucoure (Watford)
“It’s true that when the season started, my goal was to have a good campaign and catch the eye of Didier Deschamps,” said the Watford midfielder last month. “Now that it’s happening, and that my statistics have made everyone take notice, it would be a dream, everyone wants to play for France and if I was called up, I’d be the happiest guy in the world.” Sorry fella but it ain’t happening yet. Though after that embarrassing 3-2 home defeat to Colombia, who knows?

What was Kante thinking of losing the ball in such a crucial time… He is the most overrated footballer and the reason I stopped supporting Chelsea. Unacceptable and should be warming the bench for Chelsea and France.
Doucoure >>> Kante. Don't @ me pic.twitter.com/Ltw7iqw3q8

Central midfield: Pedro Obiang (West Ham)
When West Ham were pulling themselves out of the relegation zone and into mid-table with a run of just one defeat in nine Premier League games, Pedro Obiang was central to the Hammers’ success. He then got injured, the Hammers won just one game in six and they are slap-bang in trouble again. And the chances of Obiang converting Spain Under-21 caps into full honours is still pretty much zero. And yes, he is better than Jake Livermore.

Attacking midfield: Richarlison (Watford)
Remember back in November when the Brazilian was basically the best attacking player outside the top six? Things have gone a little awry since then but Richarlison has still largely impressed in his first season outside South America. But right now he is behind Douglas Costa, Gabriel Jesus, Roberto Firmino, Neymar, Taison, Willian Jose, Diego Souza, Diego Tardelli, Luan and probably about 17 other players in the Brazilian reckoning.

Attacking midfield: Pascal Gross (Brighton)
You have to admire his honesty. When asked in November if his impressive statistics for Brighton could earn him a World Cup call, Gross said: “No. It’s too late for me. We have many good young players who have a big standing in the national team.” He may have the same number of Premier League assists as Christian Eriksen, Mesut Ozil and Riyad Mahrez this season but, even at just 26, he knows that his Germany Under-19 caps are likely to be his last.

Striker: Glenn Murray (Brighton)
When you have scored 11 Premier League goals and everybody else who has scored eight goals or more has an international cap, you are right to put your hand up and ask questions. Even if the answer to those questions is ‘no, you’re really not good enough, Glenn’.

Guess which one got the @England call up?#ThreeLions