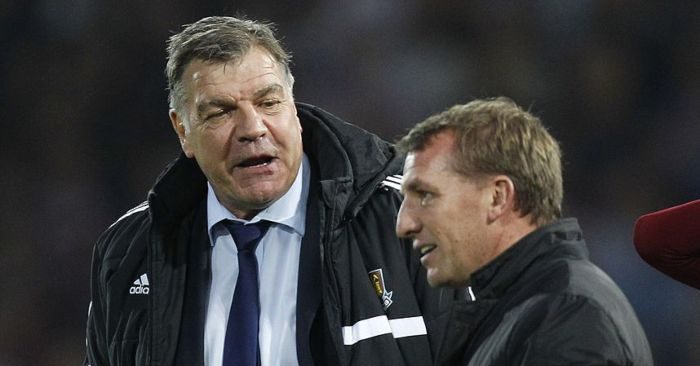 There’s a success story in the Premier League that is quietly revolutionary. Perhaps almost without it being talked about, it now has nine clubs managed by British men: eight English and one Northern Irish. And almost every one of them is rather good. While Roy Hodgson and Steve Bruce are very much old stagers, the other seven are spoken of very highly, from Dean Smith to Graham Potter, to Chris Wilder, Sean Dyche, Brendan, Eddie Howe and of course Frank Lampard. Not a bad septet.

How times have changed. But why? For a while it seemed like thoughtful, progressive English managers were a dying breed, so what has brought about this renaissance? You might be shocked to learn it is a lot to do with Sam Allardyce.

When, with all the self-awareness, grace and charm of an incontinent rhino in a lingerie store, Allardyce suggested a couple of years ago that British coaches were “almost deemed as second class” in England during a television interview – somewhat inevitably with Richard Keys and Andy Gray on beIN Sports – adding that British coaches “have nowhere to go” and “the Premier League is a foreign league in England” many of us put our head in our hands and groaned at such a dreadful chippy Little Englander mentality, a mentality at odds with the facts, as much as at odds with the modern world of football, indeed the modern world, period.

This all followed on from the infamous Paul Merson and Phil Thompson evisceration of Marco Silva’s appointment at Hull earlier that year, which I won’t go over again, but which seemed to have its roots in the same poisonous waters. And they were not the only ones by a long way, nor were these the only instances of claims that ‘the foreign lads’ got jobs over and above ‘good, young, English managers’ as the cliche goes, but Allardyce and those who orbited him were the leading propagandists for this view.

Well some think he absolutely was.

For additional exclusive content which will be available later this year as an addendum to my new book, Can We Have Our Football Back?, I talked to people who have worked in the game over the last decade or more and was told executives at some clubs absolutely were put off employing English managers. Why? Because of Allardyce and his buddies in the media. One put it to me this way.

“Allardyce and a few other high-profile people and newspapers talked such rubbish for so long that they spoiled the British manager brand with some potential employers. I have no doubt about that. Some execs, especially from abroad, thought English managers were all likely to be at least a bit like him with that weird small-islander mentality and full of entitlement and bragging. They seemed narrow-minded and out-of-date. They were totally put off and went for non-British coaches instead because they seemed more progressive, intelligent and open-minded. They were prepared to work in different countries and absorb different cultures and thinking. Allardyce and those who thought like him, weren’t. One used to refer to them as ‘the Dad’s Army crowd’. That’s what they seemed like: something from the past.

“On the other hand, there were also those at some clubs who thought like him – sometimes, but not always, clubs with English owners – and for a while would appoint managers largely because of their British nationality. I vividly remember the attitude among the hierarchy of my club when Sherwood first got the Spurs job and then Villa. They were wide-eyed in disbelief. It became iconic of what not to do. He became iconic of a terrible appointment made on wholly the wrong basis.

“For a long time, the worst, most narrow, jingoistic pundits also made getting a job for an English coach both much harder for some, but much easier for others. The situation they all moaned about did exist to a degree but it existed because they created it! Two things ran in parallel: both over-rewarding and discrimination of British managers.”

However, this seems to be less and less the case today with only 22 managers of the current 91 English Football League clubs not British or Irish by nationality and only one of 42 in Scotland.

When I raised this with another interviewee, he said this was precisely because of the declining influence of the old guard and the upgrading of the punditocracy.

“All those old voices are a bit…kind of toxic, I suppose. You flinch when you hear them, don’t you? Not that many would openly say that. OK, they’re still out there and Allardyce is on talkSPORT sometimes, but he just sounds like someone who is being employed to say something controversial. He’s like a football Farage, isn’t he? He’s such a downmarket brand and increasingly irrelevant. That’s my view anyway, and I’m not alone in that.

“Things have totally moved on. Look at how someone like Ian Holloway was recently mocked for his Brexit views. He’s actually a very nice man but clubs want a Danny Cowley or an Eddie Howe, not Ian or Harry Redknapp or even David Moyes and that’s exactly why we’re seeing better coaches getting better jobs and doing better. The cloud that the old coterie of moaner has lifted. OK, Roy is still at Palace but he was never an Allardyce type. He’s sophisticated and intelligent and doing a half-decent job. That just leaves Brucey, who is only there due to the unique situation at Newcastle, bless ‘im.”

Another ex-club official told me:

“There’s absolutely no way Sherwood would get the Spurs job now. Even saying that seems totally ridiculous, doesn’t it? Sherwood! I mean, bloody hell. What was all that about? No way Mark Hughes would get a top-flight job now. Same goes for Alan Pardew and all the other boring Brits that used to be on the merry-go-round. That’s how much things have changed in the last couple of years. On TV you’ve got clever hard-working, articulate people like Danny Higginbotham and Andy Hinchcliffe setting new standards of analysis, so it’s natural that club owners want coaches who can speak as well as they do about the game. The pundits that just turn up and wing it on the basis of their playing career giving their views validation are few and far between now. A whole new more intelligent atmosphere has been created. Contrast those two pundits to Merson’s advice to Manchester United last week, which was simply to improve by buy loads of great players! [laughs]

“But you see, once upon a time, he’d have got away with that, now he’s either laughed at for it, or simply ignored. It’s symbolic of the upgrading of football culture I believe and that’s finally allowed excellent British managers to get good jobs without a club worrying about them saying childish things such as they’d be respected more if they had a foreign name. No-one ever worried Graham Potter would be anything like Allardyce. Same for Dean Smith. These are men cut from different cloth.”

Someone else who worked in the game until recently in an administrative capacity and now works in an agency told me:

“Imagine if Lampard went into Chelsea talking like Allardyce used to, with his attitudes. You can’t, can you? It’s my view that someone like Chris Wilder, who is hardly a flash in the pan, who has been very good for a while now, was held back from a bigger club taking a chance on him because unless you know him, you might think was another old-fashioned thick-necked English gobshite coach like Allardyce, which he isn’t at all. Those people were a drag on the game in this country for far too long. If you want more proof, look at how well England have done with Gareth Southgate in charge. He’s the opposite of everything those people are and it’s no coincidence that England have been better under his leadership. What you might call the Allardyce mentality had so much sway for so long, so much sway that they gave him the bloody England job! That seems almost surreal now, doesn’t it? He could still be doing the job, in fact. That’s unthinkable, isn’t it? That hows you how far we’ve come.”

Several times I’ve been told that the British football world is like school, with all the petty jealousies, fights, bullying, ganging up and fleeting friendships that we all grew up with. That’s why they won’t speak on the record about it. They don’t want to metaphorically – or perhaps literally – get beaten up behind the bike sheds for slagging off one of the rough boys. You can understand that.

So if you were British and got a job you weren’t qualified for, it seems you can thank Allardyce et al., and if you didn’t get a job you were qualified for, you can blame him. Either way, quietly but profoundly, it seems the culture of English football on and off the pitch has changed massively in recent years and thank god for that. It is so much better for it.

Can We Have Our Football Back? Is available as a paperback from Head Publishing and on Kindle