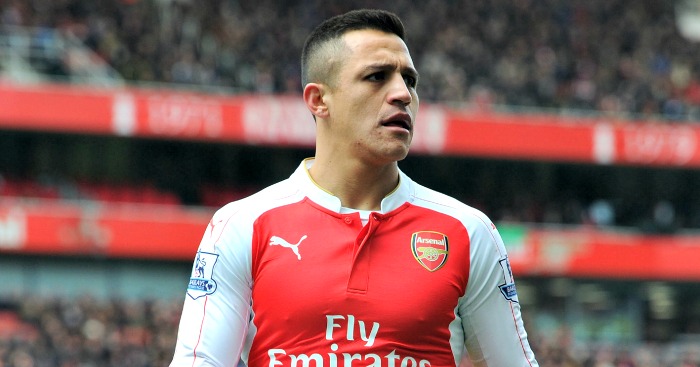 10. Jordan Ayew – 10.2% conversion rate
Despite being one of the only Villa players to come out of this disastrous season with any credit whatsoever, a barren spell since returning from a suspension that was ridiculous on his part has meant Jordan Ayew has been unable to lift any of the gloom hanging over Villa Park. The Ghanaian has scored five goals from 49 shots this season, failing to find the net since Boxing Day.

9. Alexis Sanchez – 9.5% conversion rate
He may have looked backed to his best at the weekend but Alexis Sanchez has struggled to hit the heights of his debut season in the Premier League. A tally of eight goals is still a very respectable return but only three players have averaged more shots per game this season (3.7), with Sanchez’s conversion rate dropping markedly from 13.1% last time around.

8. Josh King – 9.5% conversion rate
When Bournemouth forked out for a player that had scored just three goals in two seasons in the Championship, eyebrows were raised, with the consensus being that Josh King would be little more than a squad player at the club. However, injury to Callum Wilson ensured the Norway international was very much in Eddie Howe’s plans, so much so that he has started 19 of his 25 league appearances. A tally of just four goals is a very modest return but King has proven to be a decent outlet for the Cherries despite his lack of composure in front of goal.

7. Bafetimbi Gomis – 9.1% conversion rate
With a goal in each of Swansea’s opening four matches of the season, things were very much looking up for Gomis and indeed his manager. Almost seven months on, Garry Monk has lost his job and the Frenchman has scored just one goal from 42 shots since his scintillating start to the campaign. Gomis’ last and only shot on target of the calendar year came as a substitute against Sunderland in January.

6. Rudy Gestede – 8.9% conversion rate
When Rudy Gestede came on to score the winner on the opening day at Bournemouth just days after signing for Villa, the travelling fans were optimistic that they had found a decent replacement for Christian Benteke. The former Blackburn marksman has scored just four goals since, despite averaging a shot every 26.5 minutes this season (ranking tenth of all players to make 20 appearances or more).

5. Cameron Jerome – 8.3% conversion rate
One key question when Norwich were promoted to the Premier League was whether Cameron Jerome could finally translate his impressive Championship form to the top flight. The answer? Nope. Now 29, Jerome has never convinced of his ability to play at this level and with just three goals from 36 shots this season, he hasn’t exactly won over any critics.

4. Fabio Borini – 8.1% conversion rate
Having taken some persuading to join Sunderland on a permanent deal, Black Cats fans will have been hoping for big things from Fabio Borini this season. With just three goals thus far, only one of which has earned his side a single point, it’s fair to say his impact has been minimal following a reported £8m move.

3. Wilfried Bony – 7.3% conversion rate
Talking of players that cost a lot of money and have flattered to deceive, step forward Wilfried Bony. The Ivorian may have started just 11 of his 21 Premier League appearances this season but a return of only four goals simply isn’t good enough for a team with City’s aspirations, regardless of his fringe status in the squad. It’s not for want of trying – Bony has averaged a shot more often than any player this season (every 18.8 minutes) – but it seems the 27-year old is far better suited to the big fish in a small pond scenario.

2. Heung-Min Son – 6.7% conversion rate
While few would go so far as to criticise the South Korean following his move to Spurs in the summer, it’s certainly fair to say Son hasn’t had the impact many expected at White Hart Lane. His willing running has been an asset in Pochettino’s system but while it’s meant little due to the form of his new teammates, a tally of just two league goals from 30 shots is disappointing from a player that set Tottenham back a fee in the region of £22m.

1. Memphis Depay – 4.3% conversion rate
On the subject of players who have been disappointing, Memphis has arguably been the most underwhelming signing of the season, at least as far as expectations are concerned. The Dutchman was the top scorer in the Eredivisie last season but has scored just two league goals from 47 shots in his debut campaign in England’s top flight, with lots of work to do to convince the fans that he will eventually come good at this level.