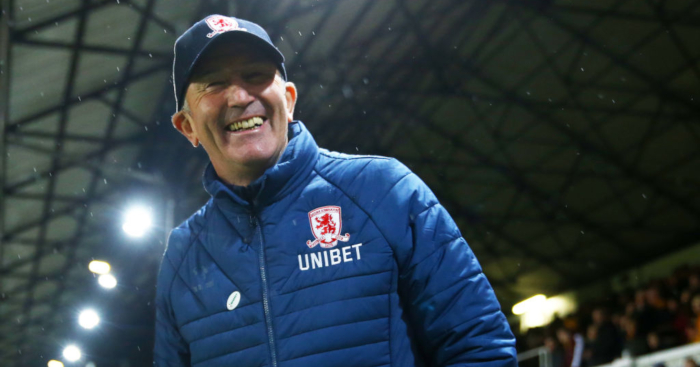 Matt Miazga didn’t know quite what he’d done wrong, but for 20 minutes or so, sections of the Middlesbrough crowd were booing him.

The unwitting Reading defender had disposed of an unusual pitch invader at the Riverside. A dinosaur balloon had been released from the stands in protest at manager Tony Pulis’ tactics and, in quite literally stamping it out, Miazga had deprived the fans of a rare source of entertainment despite Boro going on to win from behind.

A point behind Super Frank‘s Super Rams on the last day, Boro are well in the hunt for the last play-off spot. But you get the impression plenty of fans would settle for missing out.

A look at Boro right now reveals a familiar picture: a club with Pulis at the helm and a fanbase who just want it to be over.

After a super start to the season which seemed to have a top-six berth locked in, Boro went off the boil. Humiliating cup exits to Burton and Newport – drawn at home on both occasions – undermined fans’ confidence and dented their pride; dour football sapped their matchday enthusiasm, and a recent spell of six successive defeats crippled momentum.

That goalkeeper Darren Randolph was elected Player of the Year with nary a voice of dissent tells its own story; like an Irish David de Gea, to imagine where his team would have been with a lesser custodian is a troubling thought.

But the problems at Middlesbrough extend beyond the pitch, a collective sense of ennui borne by a growing disconnect between club and supporters.

Timing has been an issue throughout the season. Some muddled thinking in the marketing department saw white-and-silver third kits apparently commemorating the club’s link with Hummel, the escape from liquidation in 1986 and the area’s industrial history all in one – all for the low, low price of £75. The shirt was only worn in a thoroughly forgettable 1-1 draw at Hull, and came off as little more than a cashgrab, a soulless exploitation of fan loyalty and nostalgia.

The decision to raise season-ticket prices midway through a campaign in which only one club outside the relegation zone have scored fewer goals went down as one might expect, and was hardly helped by the subsequent form: LLLLLL.

Fan favourites were sold and not replaced in the summer. January’s feted missing piece in the puzzle Rajiv van la Parra played just 69 Championship minutes before vanishing without trace. His fellow winger Stewart Downing was unable to start for two months due to a contract dispute, and teenage protégé Marcus Tavernier has been curiously starved of match action.

Things have been misjudged, miscommunicated or simply gone wrong all season and it has worn fans down.

Even the absolute banker of ‘scoring goals from set-pieces’ has gone awry. Middlesbrough, the Tony Pulis team whose preferred eleven contains four centre halves with a combined height of over 25 feet, haven’t scored from a free-kick or corner in 40 games.

It isn’t the biggest problem but it is the sort of ironic straw that breaks a weary camel’s back. Fans have vented their frustrations or laughed them off all year but now the prospect of the season coming to a close is light at the end of the tunnel rather than the barren, Saturday-less wasteland melodramatic football supporters like to see it as.

But if those dark clouds align and Derby honour their commitment to capitulation, with Boro beating relegated Rotherham, Leeds would likely await in the play-off semis. It is harder to imagine a more different relationship between manager and fans and, though both of their meetings this season have ended in draws, few Teessiders would be optimistic against Bielsa’s side.

With Pulis’ contract up in the summer, a seventh-placed finish would give owner Steve Gibson little justification to back him with a renewal. Though the chairman certainly admires his manager and is grateful for the cost-cutting measures he has taken, he must also be aware of the backlash such a decision would bring.

‘Just bin it off and start again next season’ is unlikely to be the message Boro put out on social media ahead of Sunday. But plenty of fans might just appreciate their honesty if they did.