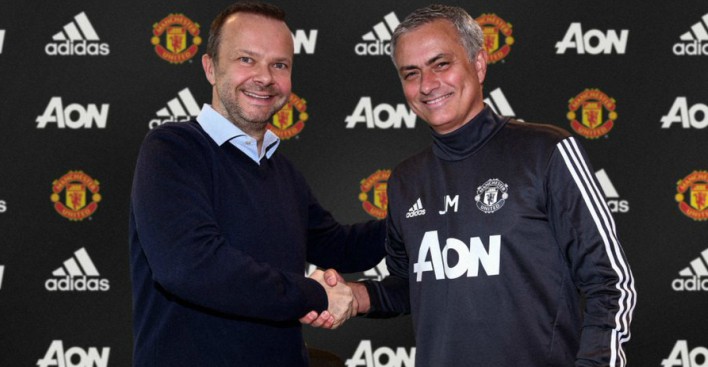 Manchester United were not willing to give Jose Mourinho the players he wanted this summer due to misgivings at board level over his selected targets.

Mourinho warned it could be a “difficult season” if United did not bring in at least one more face, with centre-back the main focus in a market that was inflated by last summer’s deals.

But the writing was on the wall for Mourinho’s recruitment hopes by the morning of deadline day, when he spoke of being “not confident” that his club would deliver any of his targets.

Ed Woodward was at Carrington on Thursday when Mourinho spoke to the press and the club’s version of events, reported by a number of Friday’s newspapers, suggests that the funds were in place for United to spend big this summer – but only on players of a better quality than those already in the squad and not on short-term fixes.

According to what was seemingly briefed:

– United were ready to spend big on a world-class defender, with a £100million move for Raphael Varane considered. Woodward had breakfast with Real Madrid president Florentino Perez while both clubs were in United States when it was made it clear that the France international was not for sale.

– For all the reports linking Toby Alderweireld with United, only one conversation took place between the Red Devils and Tottenham – and that concerned the possibility of players moving in the opposite direction. United felt that a £75million outlay over four years on Alderweireld, 29, was too steep for a player with no resale value, especially when he could be purchased for £25million next year.

– Yerry Mina was another target but United refused to pay what they viewed as excessive agents fees. The Barcelona defender joined Everton late on deadline day and United are hoping that the Toffees did not cave to the Colombian’s representatives’ demands and potentially further distort the market.

– United’s interest in Jerome Boateng was tempered by concerns over the 29-year-old’s in injury record. The Red Devils have had their fingers burned before when buying Owen Hargreaves and Bastian Schweinsteiger from Bayern.

– Woodward and the board were willing to make an exception in the case of Diego Godin. The 32-year-old was thought to represent good value for his £18million buy-out clause but Godin was reluctant to leave Spain and instead used United’s interest as leverage in negotiations with Atletico over an improved deal.

On the day United kick-off the Premier League season against Leicester at Old Trafford, Mourinho will be considering his next move having lost a power struggle which lasted the summer. Woodward and the board’s view of what represents value in an over-inflated market contrasts sharply with Mourinho’s approach to building winning teams by buying established, experienced players.

While Mourinho would have been willing to sell Anthony Martial and Paul Pogba, the club were adamant in their refusal to entertain offers for two young stars who it is believed deserve time to reach their potential. But Mourinho, as The Guardian put it, ‘has been withering in his assessment’ of Martial.

Foreign clubs have until the end of the month to sign players but the United board are not considering any more exits unless the offer suits them. Matteo Darmian has been linked with a return to Italy but the club are keen to retain the defender due to his versatility across the backline.

Mourinho must now take a squad that he clearly feels is not strong enough into a battle he may not feel is winnable. United finished 19 points behind Manchester City last season, which the manager regards as “one of his greatest achievements” in the game. Given the club have not allowed him to strengthen as he wishes, Mourinho now has the mitigation he may need by “the end of November or December”.