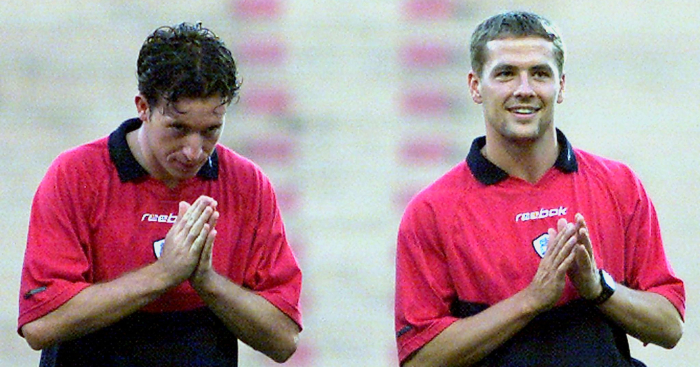 Which players have scored the most Premier League goals at every age from 16 to 40? Funny you should ask, really.

Most Premier League goals as a 16-year-old – James Milner (2)
Three players have scored in the Premier League at the age of 16. But while James Vaughan and Wayne Rooney did so just once, James Milner raised the bar. He followed his first goal on Boxing Day 2002 in a 2-1 win over Sunderland by helping Leeds to a 2-0 victory over Chelsea two days later, a whole week before his 17th birthday.

Most PL goals as a 17-year-old – Wayne Rooney (6)
It was just five days before the forward turned 17 that the delightful Clive Tyldesley implored us to “remember the name” of Wayne Rooney. He certainly ensured it would be difficult to forget, netting five more times that season and once more in the first month of 2003/04 to set a mark that may last for quite some time.

Most PL goals as an 18-year-old – Michael Owen (23)
Few 18-year-olds have ever captivated football on such a global stage as film connoisseur Michael Owen, who spent perhaps the best 12 months of his entire career terrorising Argentina, being voted fourth in the Ballon d’Or vote, and becoming the youngest ever Premier League Golden Boot winner and hat-trick scorer.

Most PL goals as a 20-year-old – Robbie Fowler (29)
There is a reason Fowler was only the second player to ever win consecutive PFA Young Player of the Year awards. The forward scored 64 of his 163 total Premier League goals before he turned 21.

Most PL goals as a 21-year-old – Harry Kane (21)
Dele Alli pushed his teammate close with 18 Premier League goals at the age of 21, while Marcus Rashford has eight months to improve on his current tally of ten. But it will take quite the effort to dislodge Sir Harry.

Most PL goals as a 22-year-old – Andy Cole (33)
With two of his five Premier League hat-tricks coming at the age of 22, Neil Ruddock’s best friend Andy Cole undoubtedly enjoyed more team success with Manchester United, but was at his most individually and unerringly lethal at Newcastle.

Most PL goals as a 23-year-old – Alan Shearer (31)
Already well into his 20s by the time the Premier League became a thing, Alan Shearer missed out on the chance to set even higher benchmarks. But he rectified that almost immediately with 16 goals in the inaugural season at the age of 22, and almost double that tally as a 23-year-old.

Most PL goals as a 24-year-old – Alan Shearer (34)
And boy, was he eager to make up for his enforced early absence from a relatively meaningless list that would be curated over two decades later. Shearer’s record of 34 goals in a season – albeit over 42 games – still stands, helping fuel Blackburn’s run to the Premier League title.

Most PL goals as a 25-year-old – Mohamed Salah (32)
The hat-trick stood for over 20 years. Shearer scored 31 Premier League goals at the age of 25 but was finally toppled last season by the Egyptian King. Who’d have thought that being told you are not Salomon Rondon would make you score 32 goals in 36 games?

Most PL goals as a 27-year-old – Thierry Henry (26)
Already an Invincible by the time he turned 27, Thierry Henry ensured he became the first player to officially retain the European Golden Shoe with some similarly sparkling performances in 2004/05. No wonder he thought he was better than everyone as a manager.

Most PL goals as a 28-year-old – Les Ferdinand (30)
Had Pierre-Emerick Aubameyang been given more than 13 Premier League games as a 28-year-old, he might have threatened Les Ferdinand’s 30-goal record. As it is, Sir’s exploits with QPR in 1994/95 and Newcastle in 1995/96 are unlikely to be surpassed anytime soon.

Most PL goals as a 29-year-old – Jimmy Floyd Hasselbaink (28)
The first non-English Premier League Golden Boot winner, and one of only three men to claim that title with two different clubs, Jimmy Floyd Hasselbaink showed no signs of slowing down as he approached 30. For context, Sergio Aguero managed 21 goals as a 29-year-old. You can even remove the six goals Hasselbaink scored in three games against Tottenham at 29 and he leads the way.

Most PL goals as a 30-year-old – Ian Wright (27)
At 28 years and nine months old when he made his Premier League debut, Ian Wright knew he had little time to waste. And waste it he did not. Life began at 30 for the Arsenal striker, whose haul included consecutive hat-tricks away at Ipswich and Southampton.

Most PL goals as a 32-year-old – Didier Drogba (19)
A year that comprised the end of Chelsea’s Double-winning 2009/10 season and the majority of a far more underwhelming 2010/11 included consecutive Premier League hat-tricks for Didier Drogba: on the final day of the former campaign, and the opening day of the latter.

Most PL goals as a 33-year-old – Alan Shearer (22)
He was seriously bloody good, wasn’t he? He didn’t even have any knees at this stage!

Most PL goals as a 35-year-old – Zlatan Ibrahimovic (13)
“As I said when I was in England, you’re lucky I didn’t come 10 years ago, because if I did what I did at 35 years old, imagine it if I was 25,” said Zlatan Ibrahimovic last November. Fella says he put everyone in a wheelchair. Sounds like a criminal offence, really.

Most PL goals as a 36-year-old – Gianfranco Zola (14)
The “clever little so-and-so” who “annoyed” Sir Alex Ferguson undoubtedly arrived on these shores far too late. Chelsea signed Gianfranco Zola when the Italian had only recently turned 30, but he spread enough magic over seven seasons to leave an indelible mark. The forward saved his best Stamford Bridge campaign until last, scoring 14 goals to fire Chelsea to a Roman Abramovich-attracting Champions League spot in 2002/03.

Most PL goals as a 37-year-old – Teddy Sheringham (10)
Two goals for Tottenham – and that c*** Glenn Hoddle – at the end of the 2002/03 season, combined with eight for Portsmouth before he turned 38 in April of the following campaign, showed that age was never really a factor for Teddy Sheringham. He even became the oldest player to score three goals in a single Premier League game in a 4-0 win over Bolton, in what shall henceforth be known only as the gerihat-trick.

Most PL goals as a 39-year-old – Teddy Sheringham (6)
“Biggest transfer regret? I’d say Teddy Sheringham. It was a boardroom decision not to sign him because of his age. They thought at the age of twenty-seven or whatever it was that he was too old. Not too old to play, but too old to be a good investment.”

Most PL goals as a 40-year-old – Teddy Sheringham (2)
Perhaps the only thing preventing Teddy from completing a clean sweep from 37 to 40 was his decision to drop down to the Championship with West Ham upon his Portsmouth departure in 2004. He scored 20 goals in helping the Hammers to promotion, six upon their return to the Premier League, then two more in his final top-flight hurrah at 40.