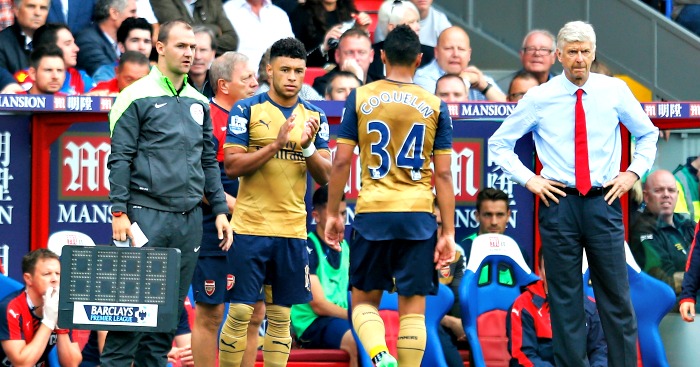 Leonardo Ulloa
The tall, aerial threat yin to Jamie Vardy and Shinji Okazaki’s bloody annoying, tireless yang. Leonardo Ulloa boasts the honour of the Premier League player who has been introduced as a substitute most often this season. Claudio Ranieri has called upon the striker 15 times from the bench, handing him just five starts in return. The 29-year-old scored the final goal against Stoke in a 3-0 win in January after coming on as a second-half substitute. Only once have Leicester truly benefited from his late impact however, although the importance of his winner against Norwich in late February is yet to be gauged.

Kelechi Iheanacho
When Plan A is Sergio Aguero, being Plan B is hardly an insult. Kelechi Iheacho has emerged as the most promising youngster from Manchester City’s new academy, becoming a key figure of a team previously fighting for trophies on four fronts. Manuel Pellegrini has started the 19-year-old just three times, adjusting City’s system to accommodate two strikers to do so. The manager’s preference is to use Iheanacho as a substitute. The striker scored the winning goal against Crystal Palace within a minute of his introduction in September. He also struck a stoppage-time winner in the 2-1 win over Swansea in December, while he scored in vain against Tottenham from the bench.

Alex Oxlade-Chamberlain
The 22-year-old may have stagnated at Arsenal, but Alex Oxlade-Chamberlain remains Arsene Wenger’s favourite back-up plan. The England international has started nine Premier League games this season, but has been used as a substitute in 13. Wenger is seemingly oblivious to the fact that Oxlade-Chamberlain is yet to score or assist a single goal from the bench this season. In fact, including this campaign, the winger has scored no goals and assisted just three in 51 games as a Premier League substitute. What is the opposite of an ‘impact sub’?

Rudy Gestede
Only Jordan Ayew has outscored Rudy Gestede at Aston Villa this season, despite 13 of the former’s 23 Premier League appearances coming from the bench. His strike against Everton on Tuesday represented his third as a substitute, his first coming on the opening day in victory over Bournemouth, and his second against Leicester in a 1-1 draw in January. The Frenchman started seven of Tim Sherwood’s ten games as manager until October. Under his compatriot Remi Garde, he has started three of 14 matches.

Modou Barrow
When Bertrand Traore scored his first goal for Chelsea against Newcastle in February, the striker made history. He became the first footballer from Burkina Faso to score in the Premier League, representing the 94th different nationality to score in the competition. Those who relish such statistics will be watching Modou Barrow closely for the remainder of the season. The Swansea striker is the first player of Gambian descent to ply his trade in England’s top flight. But the 23-year-old is unlikely to be handed the opportunity to make it 95 different nations from the start, having made 13 of his 16 appearances from the bench this season.

Rickie Lambert
Describing Rickie Lambert as a Plan B at West Brom is rather generous. Tony Pulis has sent the professional ball holder-upper on 13 times this season, using him just five times from the start. But Saido Berahino’s return to the first-team fold at The Hawthorns has rendered Lambert an afterthought. The 34-year-old’s last Premier League appearance came in the 2-1 win over Stoke on January 2. Is it too late to convert to a centre-half?

Jordon Ibe
Brendan Rodgers and Jurgen Klopp have joined forces to utilise Jordon Ibe in six different positions this season. His regular role on the substitute’s bench makes it seven. The winger has played 848 minutes of Premier League football. Each of his 20 games average at 42.4 minutes apiece, quite succinctly encapsulating the 20-year-old’s place in the Liverpool squad. To his credit, his solitary league assist came as in one of his 12 substitute appearances, this against Chelsea. That was in October.