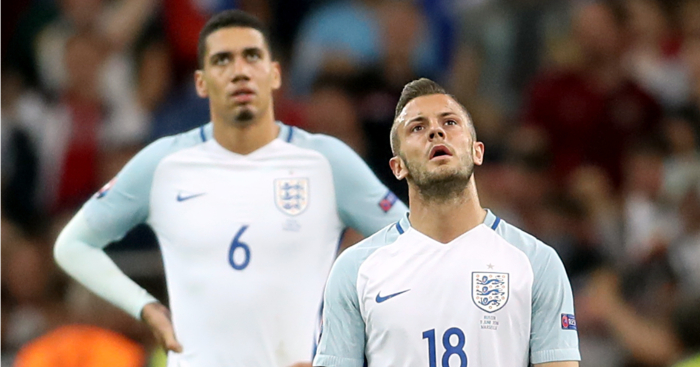 The only rule is that the player cannot be currently injured. And it gets tough…

Alternative Jack Butland
Nobody can quite match Joe Hart’s fronting up skills and ability to organise a darts competition but crucially not tell the Daily Mail’s Charlie Sale about it, but England’s current fourth-choice goalkeeper can have Butland’s place.

Alternative Jordan Pickford
You might have forgotten that he exists, but Angus Gunn was called up to an England squad six months ago. He covers the young goalkeeper spot perfectly.

Alternative Gary Cahill
No replacement for Cahill’s experience, but Hart sees to that. Jamaal Lascelles covers the ‘proper defender’ part of Cahill’s game, the only defender in the squad whose passing out of the back is wilfully ignored in favour of their tackling and heading.

Alternative Phil Jones
There is only room for one Manchester United central defender, given that they have protected David de Gea slightly more effectively than a chocolate fireguard this season. Jones out, Chris Smalling in.

Alternative Kyle Walker
We can’t see Gareth Southgate playing Nathaniel Clyne in central defence, but he was vying with Walker for a squad place before the lingering, frustrating injury. He’s in.

Alternative John Stones
James Tarkowski doesn’t have the ability to step up out of defence like John Stones, but we’d be perfectly happy to see him on the plane and he passed the ball beautifully against Italy.

Alternative Ashley Young
Can he play on the left and on the right? No. But Ryan Bertrand can play in multiple positions, and is probably the player who can count himself most unlucky not to be going to Russia. We’d have had no issue with him being on the plane, as long as he brought his Su Doku book.

If you haven't had a look already, step inside our t-shirt store…this one feels particularly apt this week… https://t.co/srNOlow5t7 pic.twitter.com/uJgu0EPzHV

Alternative Kieran Trippier
Sorry what? We still have four full-backs to find? F*cking hell. Ok Kyle Walker-Peters, in you come. You’re a Tottenham right-back, so that counts. Ish.

Alternative Fabian Delph
If we’re looking for an English player who has played at left-back this season despite that not being his natural position, Ainsley Maitland-Niles is the man/boy. I think I’ve finally stopped calling him Ashley.

Alternative Danny Rose
It’s Luke Shaw, who might get replaced at club level as well as in the England World Cup squad by Rose. It does now seem a bit mad that he went to the last World Cup.

Alternative Harry Maguire
At an unfashionable club? Played in the Championship? Has a surname beginning with M? Maguire out, Ben Mee in.

Alternative Trent Alexander-Arnold
Impossible to find a young, successful right-back who can also play in central midfield. Calum Chambers might be the closest, which scares us so much we never want to turn the light off again.

Alternative Jordan Henderson
Has a retro feel to him and a capable, comfortable passer, but blends that with the slight worry that you’re never actually quite sure what he does. Jack Cork is Jordan Henderson.

Alternative Eric Dier
Crucially has to be able to play in central defence if required, but whose primary role is to protect the defence. Nathaniel Chalobah just about fits that bill, and recovered from injury at the end of the season.

Alternative Dele Alli
If England lack a creator in the Christian Eriksen mould, there are very few players outside the squad who link the attack and midfield. Junior Stanislas is one player who has actually done that very well over the last two years. But then you remember Jack Wilshere, and realise that if he doesn’t make this squad then Sarah Winterburn will bully you.

Alternative Jesse Lingard
Hey, if he’s fit enough for the standby list then Adam Lallana is also fit enough to play the skillful hard-worker role that Lingard delights in. Plus he adds vital Cruyff turns.

Alternative Ruben Loftus-Cheek
For all the furore over Jonjo Shelvey’s omission, it’s only really Loftus-Cheek who could make way for him. Both play the ‘quick forward passes to start a counter attack’ role beautifully. And by ‘beautifully’, I mean ‘less well than the options other major countries have’.

Alternative Raheem Sterling
Young wide player capable of playing centrally and scoring goals, who left Merseyside without the blessing of his manager. Ademola Lookman, you work a treat here.

Alternative Danny Welbeck
Different players at different ages, but Ryan Sessegnon and Welbeck both fit the left forward position and both have scored a surprising number of goals. Welbeck is England’s top scorer in the current squad; Sessegnon is Fulham’s.

Alternative Harry Kane
Glenn Murray. Glenn. Murray. F*cking hell. Harry, I’ll voluntarily guard you while you sleep to keep you safe. Screw it, I’ll pay to do it. It’s worth it.

Alternative Jamie Vardy
There are so very many young players in this squad, so 30-something striker must be swapped for 30-something striker. Vardy goes out and Jermain Defoe comes in. At least it will stop him moaning about not getting a call-up despite scoring very few goals in the last 18 months.

Alternative Marcus Rashford
While it is completely unacceptable to have one member of an England squad born in the 21st century, let alone two, Jadon Sancho is the perfect pick to replace the exciting Plan B option that Rashford represents. He’s more of a winger than wide forward, but Rashford has been pushed out wide this season too.

Alternative Daniel Storey – Any bugger who simultaneously acts like he’s both five and 65 years old.