Home F365 Features The shallow pool: The 41 English players not yet called up 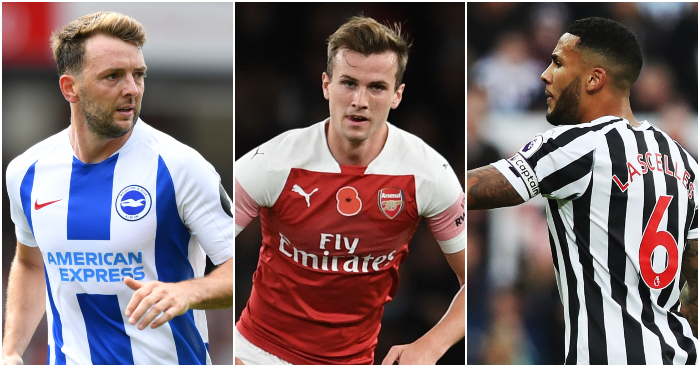 These are the 41 English players who have started at least three Premier League games this season who have not yet been called up by England. And the emphasis really is on ‘yet’…

Goalkeeper:
Ben Hamer (Huddersfield): Six English goalkeepers fit the criteria and five have been called up by England. With Gareth Southgate routinely calling up four goalkeepers, it can only be a matter of time for Hamer, who conceded nine goals in 193 minutes before being replaced by Jonas Lossl at Huddersfield.

Right-backs:
Aaron Wan-Bissaka (Crystal Palace): There will surely be a call-up within the year for a man whose phenomenal tackling has seen him named in our Premier League Perfect XI. But for now he belongs to Aidy Boothroyd (not legally).

Matthew Lowton (Burnley): He’s 29 and he plays for one of the worst defensive teams in the Premier League; it’s probably the first part of that sentence that keeps him out of Southgate’s plans.

Adam Smith (Bournemouth): There was a time when it looked at least possible. Bizarrely, with Bournemouth in sixth and Smith having played competently in both full-back positions, it has never seemed more unlikely.

Rumour that Adam Smith may be in the England squad – absolutely classic candidate for the "I thought the lads were winding me up!" interview

Jonjoe Kenny having another poor game for Everton. Feels like it’s become a weekly occurrence sadly

Ryan Fredericks (West Ham): Last pulled on an England shirt in a 3-0 Under-19 defeat in 2011. Last started for West Ham in September. He is yet to win a Premier League game.

Joe Bennett (Cardiff City): An old England Under-21 teammate of Adam Smith’s who has even less chance of a call-up.

Charlie Daniels (Bournemouth): He’s 32 and has started only four Premier League games this season. The dream is over.

Joe Bryan (Fulham): Joined for £6m from Bristol City this summer. Currently injured. My, there are a lot of English left-backs at the bottom of the Premier League.

Ryan Sessegnon (Fulham): The one player on this left-back list that will eventually play for England. Though perhaps not at left-back.

Centre-backs:
Ben Mee (Burnley): If ever it was going to happen, it would have happened last season when Burnley were any good.

Conor Coady (Wolves): “I think yes (Coady will receive an England call-up). But this is the decision of Southgate,” said Wolves boss Nuno Esperito Santo when quizzed. An awful lot of people agree. Is he the next man on the list?

No room for Conor Coady again, but room for Dunk and a spurious token cap for Rooney? Ho hum #England

Ryan Bennett (Wolves): Standing just to the right of Coady – and just out of sight of Southgate – is Ryan Bennett, who played alongside Jordan Henderson for England’s Under-21 side but is unlikely to get that honour again.

Sean Morrison (Cardiff): He heads the ball a lot. But that’s not really the kind of thing that impresses the England manager.

Jamaal Lascelles (Newcastle United): Approaching his peak years as a centre-half, the captain of his club and learning from one of the great defensive managers. And yet he is behind James Tarkowski and Lewis Dunk in the average English centre-half pecking order.

Rob Holding (Arsenal): Single-handedly challenging the theory that any Englishman playing regularly for a Big Six side will automatically get an England call.

Lewis Dunk in the England squad ahead of Rob Holding is actually a joke. Has Southgate watched any Arsenal games this season? Holding is the most in-form English centre-back in the league.

Jack Stephens (Southampton): On the plus side, he was given his England Under-21 debut by Southgate. On the flip side, he was recently dropped by Southampton after the 6-1 mauling by Manchester City.

Central midfielders:
Dale Stephens (Brighton): “You have to back yourself. I believe I can play that standard of football and if the opportunity arrives I’ll snatch it with both hands.” Stranger things have happened.

Declan Rice (West Ham): “I think it’s fair to say I have spoken with him but I have not promised anything, because I don’t think that’s right,” says Southgate. But England are desperate for defensive midfielders and the 19-year-old is truly excelling in that position. Usually.

Watching #MOTD not sure if Ireland would be too bothered if @_DeclanRice declared for England. Very poor mistake today. Leave him not be selected for the English along with Grealish. If you need time to think about if you’re Irish or English, guess what, you’re not Irish☘️👊🏻🇮🇪

Joe Ralls (Cardiff City): Returned straight to Cardiff’s starting line-up after a suspension for a ridiculous tackle on Lucas Moura. But he remains a million miles from England. Thankfully.

Ashley Westwood (Burnley): We genuinely forget he is at Burnley.

Mark Noble (West Ham): If it didn’t happen under Sam Allardyce; it ain’t ever going to happen.

Jonathan Hogg (Huddersfield): Are there any English central midfielders not in the bottom half of the Premier League?

Dan Gosling (Bournemouth): Ah, an English central midfielder not in the bottom half of the Premier League. Though he has recently lost his place to Jefferson Lerma.

Tom Davies (Everton): Ah, another English central midfielder not in the bottom half of the Premier League. Though he has recently lost his place to Andre Gomes.

Attacking midfielders:
Solly March (Brighton): Capped by Gareth Southgate at Under-21 level and an ever-present for Brighton in the Premier League this season. He must have a sliver of a chance.

Will Hughes (Watford): Capped (many, many times) by Gareth Southgate at Under-21 level and an ever-present for Watford in the Premier League this season. He must have more than a sliver of a chance.

Why do we need 4 goalkeepers ffs? The only one who will play is Pickford there’s literally no point of Bettinelli being in the squad, especially at the expense of someone like Will Hughes

Bobby Reid (Cardiff City): One goal against Fulham does not an international footballer make.

Marc Albrighton (Leicester City): If you can’t get an England call-up when you are winning the actual Premier League…

Grady Diangana (West Ham United): Called up by Paul Simpson to his England Under-20 squad this week, the exciting winger is the only real youngster on this list.

Strikers:
Glenn Murray (Brighton): The only Englishmen to have scored more than his 13 Premier League goals this season are Harry Kane and Jamie Vardy. But he is 35. And that is a pretty big ‘but’.

Andre Gray (Watford): Three Premier League goals in six games made him part of the conversation. Being dropped by Watford stopped that conversation.

Troy Deeney (Watford): “If you look at a Danny Ings, Glenn Murray, Callum Wilson, we would probably all be arguing well what do I need to be in the team?” asked Deeney in September. It turns out the answer was ‘score six goals and not be 35’.

Danny Ward (Cardiff City): And now you know why Danny Welbeck was still getting the nod.