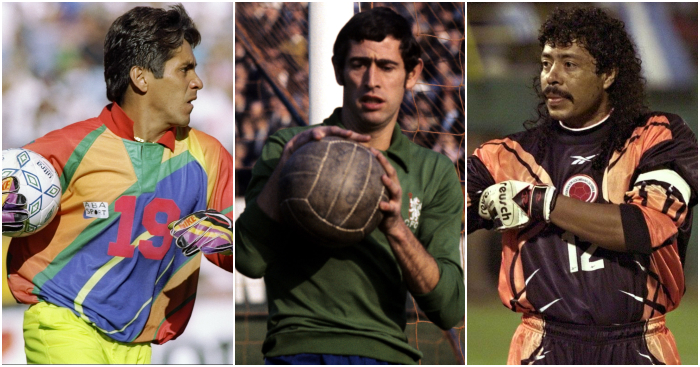 Jorge Campos – 5ft 7in
Apparently Manuel Neuer wasn’t the first goalkeeper in the history of the game who could use his feet for something other than getting on the team bus. Campos, capped 130 times for Mexico, moonlighted as a striker while he waited at Pumas for his opportunity between the sticks. He made a decent fist of it, scoring 24 goals to be his side’s top scorer in the 1989-90 season before retreating back to his own box.

Campos is most famous for designing his own garish kits. The oversized, fluro designs perhaps made him appear a larger presence in the goal than his 5ft 7in frame would have otherwise. Cruz Azul didn’t fancy him as a youngster because of his struggles reaching the top shelf but Campos received plenty of other offers throughout a 16-year career, the vast majority of which was spent around the Mexico squad.

Campos was also the first major overseas star recruited by MLS, where he played for LA Galaxy and Chicago Fire. His height remained a sore point though, with the keeper standing on a ball during pre-match team photos to make the contrast with his team-mates less stark.

Rene Higuita – 5ft 9.5in
The Colombian was another who fancied himself outside his own box. And, like Neuer, Higuita also had his pants pulled down when he strayed beyond the limits of his penalty area during the World Cup.

That image, and the memory of his scorpion kick at Wembley in 1995, are what many remember Higuita for. But in his homeland, he remains revered as one of the finest players they have ever produced. Still, he wasn’t given the name El Loco for no good reason. And not just because of his regular jaunts upfield.

Between being robbed by Roger Milla and back-heeling Jamie Redknapp’s mishit cross back to the Wembley halfway line, Higuita spent seven months in prison. Acting as a go-between for drug barons Pablo Escobar and Carlos Molina, he helped facilitate the release of Molina’s daughter by delivering ransom. He was paid $64,000 for his trouble, apparently not aware that it is an offence in Colombia to profit from kidnapping. “I’m a footballer, I didn’t know anything about kidnapping laws,” was his response. Well alright.

Peter Bonetti – 5ft 10in
Like Higuita, Bonetti is another keeper with less than wonderful memories of the World Cup. The Chelsea legend stepped up for the 1970 quarter-final against Germany when England’s top cat Gordon Banks “felt as weak as a kitten” after going down with food poisoning. There were claims that Banks had been nobbled by the CIA; regardless, it was three days after the World Cup-winning keeper had made THAT save from Pele, so stepping into his gloves was an unenviable task for Bonetti.

It didn’t go well. Bonetti should have saved two of Germany’s three goals in their come-from-behind win to knock out the world champions. The keeper received so much stick that, apparently, his mum wrote to a newspaper to ask them to stop being so mean.

He never played for England again – though he did have a stint as national team goalkeeping coach – but Chelsea fans rightly remember Bonetti with more reverence. He kept over 200 clean sheets in 729 appearances before retiring to become a postman on the Isle of Mull.

David Ospina – 6ft
Thibaut Courtois reckoned Jordan Pickford was short but the England keeper still looked down on his Colombia counterpart this week. Ospina gives up a two centimetre advantage to the Everton stopper with the keeper – whose contract at Arsenal expires next summer – measuring up at a shade over 6ft.

There were questions over the Colombian’s physical stature when he arrived at Arsenal, and Ospina admitted during his first year that his had to look up at other keepers. “In England, they are all two heads taller than me!” he said. “They are 1.90m, maybe more. You laugh but really it puts a little pressure on. Even Hugo Lloris is supposed to be small but he is how tall? 1.87m, 1.88m? The smallest one is me.”

But Ospina’s height rarely gets mentioned these days, largely because his performances over the last four years have offered plenty of other flaws to pore over instead.

Steve Death – 5ft 7in
The Reading great would probably not get a chance even as an outfield player these days owing to his height. Death stood at just 5ft 7in but that did not stop him becoming arguably the Royals’ greatest ever goalkeeper during a 12-year career that spanned three decades after signing on loan from West Ham in 1969.

Death apparently shared the England schoolboys gloves with Peter Shilton – another who was hardly a giant. Though stood next to Death in the team photos, he probably appeared as much.

After his Reading debut, Death was described as “an insignificantly built bundle of daredevil energy”. He went on to set a record for going 1,074 minutes without conceding a goal in league football, which was subsequently broken by Man Utd’s Edwin van der Sar in 2009.