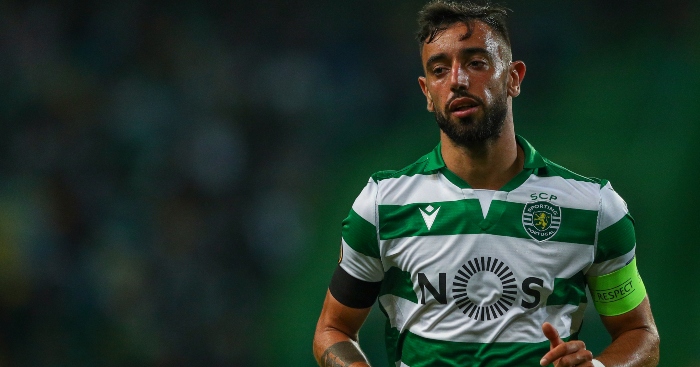 Bring me Bruno
A midfield trio of Phil Jones, McTominay and James Garner.

It’s almost shocking that there were no shots on target created in open play.

Bruno Fernandes had his quietest game in months tonight for Sporting, by the way.

If United are going to play Mata then they might as well play him deeper as one of the three as there’s really no point in him playing ahead of that dross or on the right wing and he might at least there get enough of the ball to be able to use his skillset.

United do need a striker, though that will mean dropping one of Rashford or Martial (Mitrovic is pulling up trees again for us by the way) but without a significant upgrade in the middle of the pitch there’s almost no point.

McTominay, Pogba and Fernandes behind M. Rashford, A. Striker and D.James is pretty decent, and might actually make things happen.

I really miss not being bored while watching United.
Tim Sutton

* This is 2019/20 Man U so there is a lot to complain about and most of that is with regard to the state of Utd’s midfield , The lack of creativity on show from this lot was scary . Mata is really just still in the team to offer guidance and I’m not sure what Lingard does anymore, Garner provided some passing range but is maybe a few more matches from really getting into stride.He was okay but this game mainly emphasised the importance of Mctominay

There is going to need to be major upheaval in midfield between January and the summer, Matic should be out the door ASAP,There is a growing suspicion that Pogba will be miraculously fit by January .So topping up that section with 3 or 4 people of quality really should be the next area of investment,

* Any discussion of this game must include Brendon Williams , It is an indictment of Lingard and Mata that the ballsiest and most forward thinking move came from a 19 year old , without him and some great keeping from the frequently underrated Romero ,would still be waiting for a win.Shaw still has doubters and is currently probably the weak link in our 1st choice defence Williams if he keeps this up, may finally usurp him.

* They are going to need physicality but really give the kids as much game time time in this competition, Fa cup and the carabao ,hell widen the net so we can see more of the rest like Greenwood , Chong, Gomes Laird and Devitt. January cannot come fast enough so we buy some midfielders. We are buying some midfielders right…
TIMI, MUFC

How Kane measures up
Whilst I do agree with Will’s opinion that Kane is more comparable to Lewandowski as a striker, as opposed to Neymar, Sterling and Mane (players Will named), I would happily refer to stats to suggest that Kane is arguably the superior striker.

If we assess their respective stats since the 2014/15 season (Kane’s emergence and coincidently Lewandowski’s first season at Bayern), we find that Kane has very much held his own statistically against a striker that was/is normatively considered world class and one of, if not the best in his position as a CF/9.

It can be argued, as the starting CF for the perennial German champions, Lewandowski has the tools to most certainly dominate the scoring charts domestically. Invariably, Bayern drop less points domestically and are equipped to not only win the Bundesliga, but also launch an assault for the CL every season. Kane is 5 years younger and has been playing in a more competitive league with an inferior quality of team with respect to his Bayern counterpart, yet has outperformed Lewandowski for two of the last 5 completed seasons in terms of goals to game ratio.

So again, Kane has outperformed Lewandowski in terms of goals to game for their first three completed seasons of CL football respectively. The similarities in this instance, with both Kane and Lewandowski having played their first seasons of CL football following on from a Europa League campaign the previous, makes this a better indicator of comparability. Both reached the final in Europe’s elite club competition with generally unfancied teams and both play/played key roles in their team making it to the final (despite Kane’s injury for the SF against Ajax, I don’t think it’d be silly to suggest Kane did play a big role in Spurs making the QF at the very least).

Lewandowski’s goals to game ratio for his last three completed CL seasons at Bayern read as 0.89, 0.45 and 1. His ratio is superior to Kane’s in this instance – yet this only supports the nuance explained regarding their domestic records: Lewandowski is playing for a superior team in an inferior league. When compared with relative parity, Kane definitely ranks as a peer.

Kane’s last goal in a knockout fixture was last season’s QF win at Dortmund. Kane scored the only goal of the game.

Kane has won the Golden Boot twice since his emergence, Lewandowski three times in the same time period. Kane has made the FA Team of the Year on four occasions, Lewandowski five for the Bundesliga.

At international level, Kane has a World Cup Golden Boot.

So to sum up, this reply is in no way an attack on Lewandowski, he has been and is a world class, high level striker. Most definitely in the top 10. This was merely to indicate that some respect needs to be put on the name of Harry Kane, undoubtedly one of the top 10 strikers in world football.

And I haven’t even mentioned the assists and ‘intangibles’ that Kane offers when he drops deeper, nor stressed the fact that we simply do not know if this is peak Kane, or whether he still has room for growth. Lewandowski is having a world class season at 31, there’s nothing to suggest (injuries permitted) that Kane can’t or won’t do the same. He’s still only 26.

Fresh impetus for Reds
I have to say, I think the return of Lallana, Keita and Alex Oxlade Chamberlain to the midfield fold at Liverpool couldn’t have come at a better time. Liverpool had started to look a little stale and devoid of ideas in the last few matches. As pointed out by previous mailers, if the front three don’t click and our full-backs are nullified (As Utd managed for 85 mins), without someone creating from midfield, or driving forward, taking on shots, we look a bit toothless. Henderson had a bit of an Indian summer at the end of last season and provided some creativity. Wijnaldum pops up with the odd goal and Fabinho with the occasional perfectly lofted through ball but we don’t have anyone there who can do it regularly. It’s important because it adds a whole new dimension to how we can attack, another avenue when others fail, another problem for the opposing team to come up with a solution for. I’m still waiting to see what Keita can really do for Liverpool as he hasn’t had a good run in the team yet, but the glimpses of what I have seen are promising. His direct running, his ability to dribble past players and create space for others, he can draw fouls, score himself and is pretty nifty at harrying players for the ball. He really could be great. We know what Lallana can offer if he can stay fit, as well as AOC. Not only can they offer that spark from midfield that we have been lacking, but their return is like a breath of fresh air for a squad that made no new signings of note last summer. Everything had become a little predictable, maybe even boring. I’m hoping they can breathe new life back into the front three just by the fact they will be trying things, something new for the likes of Mane, Firmino and Salah to feed off and with the congested Christmas period coming up, we’ll need as many fit players we can get for rotation. Perfect timing…if they can stay fit, touch wood.

In response to Will F and where Kane ranks? Well, this depends on your definition of a striker or centre forward. For me, that is a player who plays up front and through the middle. That rules out Sterling, Mane and Neymar as I would class them as wingers/wide forwards. Of the other players you mention (Ronaldo, Lewandowski, Messi, Mbappe and Aguero) I would add Messrs Aubameyang, Suarez (Still banging them in for Barca with 5 in 6) and Maybe Griezmann. On current form he probably tails all of them lads, but for me Clive, he’s still top ten. Just.

Maurizio, LFC, China (Just realised the Ox has the same initials as that Alexandra Ocasio-Cortez who grilled fishboy Zuckerburg the other day)

Lamps outshining Emery
Joe touches on some great points in this morning mailbox about Emery, but he’s missed a really crucial one which F365 gave praise to in their Champions League W&L column.

Frank Lampard was not supposed to be this good. Not yet, anyway.

When appointed, it all felt a bit Solskjaer-like – the hero ex-player coming in to steady the ship, but not really being at the required level to really propel the side. And yet, Lampard appears to be doing just that. There were some crap early results, such as the 0-4 reverse at United and allowing Sheffield United to equalise, but since then, they’ve been excellent.

Lampard and his coaching team have a style they want to play, they carry out a plan, and he’s moulded a few more experiences heads with some youngsters to great effect. Though I don’t think for a minute that they will, they could, theoretically go to Turf Moor this weekend and lose 2-1. The fans wouldn’t care – there is a plan here, unusually for Chelsea, they’re willing to play the longer game.

Emery doesn’t have that luxury. You think he can lose at home to Palace this weekend like the team did last year? No chance – the knives are out. And the reason is simple: Unai Emery is being out-coached by a comparative rookie at one of Arsenal’s London rivals and it’s all happened so quickly. Lampard is four months in, Emery 15. Which team looks more cohesive, plays with more style and knows exactly what their instructions are? We all know the answer here.

At this point, Freddie Ljungberg almost looks like a gamble worth taking, while Mikel Arteta’s name doesn’t seem to be mentioned with quite the frequency any more. Personally I’d like to nab Erik ten Haag from Ajax, who feels gettable now as Ajax reach the end of their cycle – as also alluded to in W&L. He also feels very ready to step into Poch’s shoes if he/Spurs do decide to move on sooner rather than later.

Ronaldo’s weakness
Have to take issue with M Rod who says that Ronaldo turned his weakness (heading ability) into a strength…in his first season at Utd he scored a header in an FA Cup Final and also a header in the opening match of Euro 2004. Think he was always pretty good at them to be fair.
Kevin G