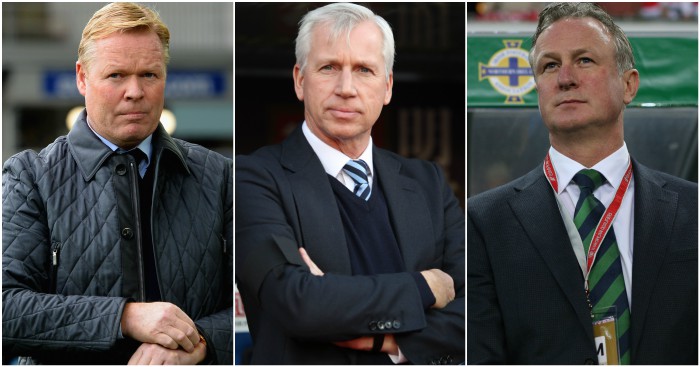 Michael O’Neill
Pros: The Northern Ireland boss has been given permission to speak to Scotland, but a Premier League move is certain to appeal to the 48-year-old. His stock might never be higher after last year guiding the Northern Irish to their first major tournament in 30 years and subsequently narrowly missing out on qualification for the World Cup.

O’Neill has rinsed every drop of talent out of the Northern Ireland squad and has proven himself to be a shrewd motivator. Three senior West Brom players know him from the national team, with Gareth McAuley singing his praises last week: “People talk about what Michael has done, and I would say he has given every player in the squad a sense of worth.”

Cons: Reports suggest Albion are looking for a manager with Premier League experience, which obviously rules out the former Brechin and Shamrock Rovers boss. Is experience necessarily a good thing, though?

If the Baggies are willing to overlook that, it may not be like for like, but O’Neill has enjoyed success by operating in a similar way to Pulis. The theme throughout his coaching career has been one of over-achievement. Are West Brom looking for someone who can overhaul their philosophy as well as their results?

Sam Allardyce
Pros: Big Sam is available and offers almost-guaranteed Premier League survival. Fewer managers out there are more experienced in the division, with the former England boss having worked with six top-flight clubs and never yet been relegated.

Fans and players may want to see a change of approach, but Albion’s Chinese owner Guochuan Lai is understood to be more concerned with retaining Premier League status and continuing to reap the riches that brings. Chairman John Williams also knows how Allardyce operates after working together at Blackburn.

Cons: Allardyce, like Pulis, is a proven firefighter and in many ways, very similar to the manager they have ejected. The more discerning West Brom fans are unlikely to get enthused about the prospect of yet more defensive, percentage football.

Similarly, would the role excite Allardyce? He pulled out of the running to become Everton boss because he was not content to be a short-term fix and is said to be willing to wait for the right project rather than jump back in to the game at the next opportunity.

Derek McInnes
Pros: McInnes has history with the Albion having captained them to promotion in 2002, making 100 appearances over three seasons. His work at Aberdeen has made him a target for Rangers and previously Sunderland, with the Dons currently second behind Celtic, where they have finished for the last three seasons. Apparently his nickname in the Midlands is FAB: Future Albion Boss.

Cons: Again, his lack of Premier League experience appears to rule him out almost immediately. If he did not have links to Albion as a player, would his CV and body of work at St Johnstone, Bristol City and Aberdeen stand up to scrutiny by an established Premier League club? Sunderland wanted him in the summer but making the jump from the Dons to the top flight in England seems a huge leap.

Alan Pardew
Pros: With over 300 matches in the Premier League, Pardew has the required experience in the top flight and the former Crystal Palace manager is said to be interested in the role after being out of work since his sacking by the Eagles 11 months ago.

Pardew was axed by Palace because, according to Steve Parish, his “expansive style of football hasn’t worked. Now we’re going to wind the dial back the other way.” Albion find themselves in the opposite predicament, and it would be wrong to label his time at Selhurst Park a complete failure.

The ex-West Ham and Newcastle manager also has a close relationship with Albion technical director Nick Hammond, with the pair having worked together at Reading.

Cons: Palace were so poor during the final weeks of his reign that they needed Big Sam to come and rescue them. Despite finding Palace in the relegation places and dragging them into the top half during his first half-season in charge, they then finished 15th in his only full season in charge and he left them only one place above the drop zone.

He has also suffered relegation with Charlton and left Newcastle and West Ham when they were falling towards the trapdoor.

Ronald Koeman
Pros: The former Everton boss would be a popular choice with the fans according to a poll run by the Express & Star in which Koeman claimed 27 per cent of the vote.

Prior to this season’s debacle, Koeman’s Premier League record is impressive. He landed the job at Everton, who he guided to seventh last term after steering Southampton to sixth and seventh during his two seasons at St Mary’s.

Koeman would be an appointment with both a record of success and a hunger to prove a point.

Cons: Koeman always seemed to regard Everton as a stepping stone, so unless he has given his head a wobble, then he is likely to see Albion in exactly the same way. And, given his stubborn philosophy, honed at Ajax and Barcelona, and how greatly that contrasts with how Albion have been playing in recent years, can he oversee what would amount to a revolution?

The Dutchman cannot say he was not backed at Goodison Park, having spent £150million before getting the bullet last month. He is highly unlikely to have similar funds at The Hawthorns.

Craig Shakespeare
Pros: Nigel Pearson is said to be in the running, having served as Bryan Robson’s assistant between 2004 and 2006. But the former Leicester manager is currently working at Belgian second tier side OH Leuven having failed to find work after being axed by the Foxes following their great escape in 2015.

Shakespeare served as Pearson’s assistant, and after remaining at the club under Claudio Ranieri during their stunning title triumph, the coach got the big gig when the Italian was fired. He lasted six months before being sacked – harshly in many of his players’ view.

Shakespeare also has ties to Albion having played 112 league games for the club before returning as a coach at every level between the Football In The Community programme and the first team.

Cons: Despite steering Leicester away from the relegation battle that threatened to tarnish the previous season’s title victory, Shakespeare has only managed 21 matches. The Foxes didn’t waste any time in making a change but the fact remains they were 18th when he was shown the door.

He has yet to fully prove that he can make the step up from being an assistant to the main man, and though only an opportunity will allow him to do that, he might be seen by the Baggies as too big a risk.