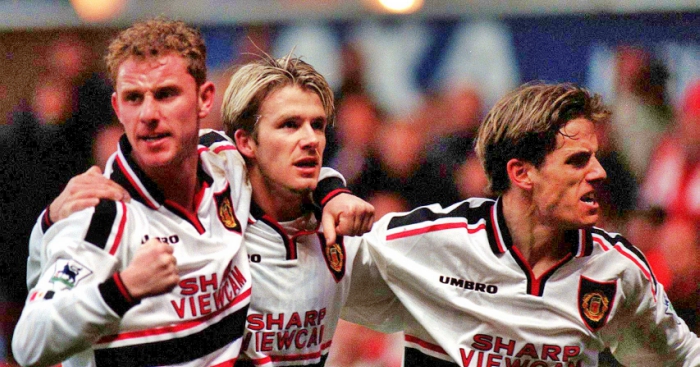 Liverpool beat Manchester City to reach the semi-finals of the Champions League on Tuesday. The draw will be made on Friday, with the first leg of their match taking place on April 24 or 25. That would make Trent Alexander-Arnold, Steven Gerrard’s best mate, the youngest Englishman to ever appear in a Champions League semi-final (19 years, 6 months and 17/18 days).

But who does the Liverpool right-back stand to displace? Who has previously waved the flag for the Three Lions at such a young age and such a late stage? Here are the six youngest Englishmen to appear in a Champions League semi-final.

6. Alan Smith (20 years, 6 months, and 4 days) – Leeds, May 2001
The story of David O’Leary’s Leeds “babies” is oft-told, and particularly relevant given Tottenham’s recent emergence as a legitimate long-term threat to the elite. The two could not be further apart with regards to their approach to the business side of things – Daniel Levy is slightly less likely to throw money at Seth Johnson than Peter Ridsdale ever was – but the comparisons between their playing squads are obvious. Just as Tottenham rely mainly on youthful exuberance with a handful of more experienced heads, Leeds used the same formula to great success in the early 2000s.

The starting XI for the first leg of the Champions League semi-final against Valencia in May 2001 contained only two players over the age of 30 (Nigel Martyn and David Batty), while Dominic Matteo was the next oldest at 27. At the other end of the spectrum was Danny Mills (23), Ian Harte (23), Harry Kewell (22) and a fresh-faced Alan Smith (20).

Perhaps it was that same inexperience that led to Smith’s moment of petulance. The striker had scored five goals for Leeds on their march to the final four, but allowed his temper to get the better of him when he was sent off for a needless foul in the final minute of the 3-0 second-leg defeat. Having played so well in the first leg and in the entire tournament beforehand, it was a disappointing end, encapsulating the highest of highs and lowest of lows that would soon come to define Leeds as a whole.

5. Owen Hargreaves (20 years, 3 months, and 19 days) – Bayern Munich, May 2001
One day before Leeds held Valencia to a goalless first-leg draw at Elland Road, Bayern Munich secured a 1-0 victory over Real Madrid in the other semi-final. The great Giovane Élber scored the only goal at the Santiago Bernabeu, as Bayern looked to avenge their defeat to the same opponent at the same stage the previous season.

The second leg saw Bayern not only protect their lead, but extend it. A 2-1 win at their former Olympiastadion home helped them reach the final and eventually lift the trophy. It was in that return leg that Owen Hargreaves would make his first ever Champions League start. The 20-year-old was entrusted alongside Jens Jeremies in central midfield to monitor the runs of Luis Figo, Steve McManaman and Guti, while outperforming Claude Makélélé. It was quite the gamble from Ottmar Hitzfeld.

It was also fine preparation for the final, and another unexpected show of faith from the manager. Hargreaves played the full 90 minutes, as well as extra-time in its entirety, as Valencia were vanquished. As The Guardian’s report on the 2001 Champions League showcase from Richard Williams noted: ‘But the coolest man on the field appeared to be the 20-year-old Owen Hargreaves, Bayern’s Canadian-born England Under-21 international, who slotted into the central midfield alongside Effenberg and was showing signs, in both his defensive and creative work, of a talent that may be of use to Sven-Goran Eriksson’s senior squad before long.’

The plan was never for Neville the younger to be blooded in such a high-profile, high-stakes match. The 20-year-old was an unused substitute for the first leg of United’s semi-final against Borussia Dortmund in 1997, with René Tretschok’s late goal deciding the first leg. But the key moment arguably came in the 68th minute, with Roy Keane’s yellow card ruling him out of the second leg. “He never touched the boy,” Ferguson insisted. “It’s incredible, it was his only tackle in the game.”

Neville took to the field at Old Trafford, but United’s hopes of overcoming a first-leg deficit were quickly distinguished. Lars Ricken scored a crucial away goal in the eighth minute to leave United needing three goals with an untested 20-year-old on his own in central midfield.

3. Theo Walcott (20 years, 1 month, and 13 days) – Arsenal, April 2009
A goal and an assist in the second leg of Arsenal’s Champions League quarter-final against Villarreal may well have persuaded Arsene Wenger that a starting berth in the final four against Manchester United for Theo Walcott was a wise decision. By full-time at Old Trafford, John O’Shea had scored the only goal, and Arsenal were firmly on the back foot in the tie.

The match reports from that game reveal Walcott’s ineffectiveness – understandable for the amount of pressure placed atop his 20-year-old shoulders. Sky Sports said that the winger was ‘well shackled by the United back four’, while the BBC declared him as ‘subdued’ before his removal for Nicklas Bendtner in the 71st minute. The second leg was hardly a story of overcoming the odds: United won 3-1 at the Emirates Stadium, with an astonishing counter-attack finished by Cristiano Ronaldo the highlight. Walcott was substituted again a minute later – and again for Bendtner – to complete a chastening semi-final experience.

It was the first leg of Chelsea’s Champions League semi-final in 2004 in which Claudio Ranieri earned his nickname. The Blues were drawing 1-1 away at Monaco at half-time and were favourites to advance to a winnable final. Jesper Grönkjaer was replaced by Juan Sebastián Verón in a substitution that raised the eyebrows, but little else. But when Monaco were reduced to ten men in the 53rd minute, Ranieri smelt blood. Jimmy Floyd Hasselbaink came on for Mario Melchiot and Scott Parker made way for Robert Huth as their balance was needlessly sacrificed in search of another away goal. It was a bizarre risk, and Monaco would take advantage to win the first leg 3-1.

Chelsea took a 2-0 lead in the return leg at Stamford Bridge a fortnight later, but Monaco fought back to level and effectively end the tie by the 60th minute. Ranieri was not about to surrender, of course. He made three substitutions in five minutes, bringing on Hernán Crespo and Parker for Hasselbaink and Geremi. But his first change was to replace right-back Melchiot with right-back Glen Johnson. It was not the tie-changing substitution many had hoped.

1. Kieran Gibbs (19 years, 7 months, and 3 days) – Arsenal, April 2009
“I don’t want to blame anyone but it is like that,” said Arsene Wenger in May 2009, reflecting on his substitution of Kieran Gibbs at half-time in Arsenal’s Champions League second leg defeat to Manchester United. The left-back’s slip had let in Ji-Sung Park to net the goal that killed the tie after eight minutes, with United adding a second away goal three minutes later. “It was 11 men against 11 babies,” was Patrice Evra’s rather less charitable assessment.

The Frenchman had a point. Gibbs was just 19 when he took to the field against Cristiano Ronaldo and co, and understandably struggled to keep the pace before being hauled off. Yet in the first leg, in the glare of the Old Trafford floodlights, he fared considerably better. The teenager held his own in what was only the second Champions League start of his career as United took a slender lead to north London. Until Alexander-Arnold takes to the field in Liverpool’s semi-final, he will remain the youngest Englishman to ever feature in the Champions League’s final four.