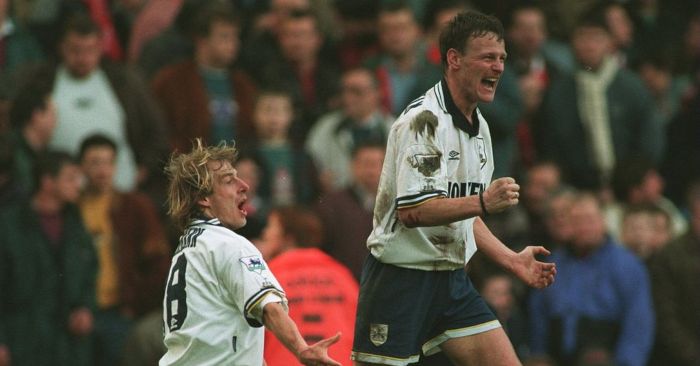 Jurgen Klinsmann and Teddy Sheringham have won a few things between them. Pretty much everything, in fact: league titles, domestic cups, European trophies, international tournaments, individual honours. Ask them to show you their medals, you’ll be there for a while.

But the pair of them will still talk with misty eyes about a grey afternoon at Anfield in 1995, a season when their team finished seventh in the league and were hoofed out of both cup competitions by theoretically inferior opponents.

Tottenham weren’t supposed to be in the 1995 FA Cup quarter-final. They weren’t even supposed to be in the 1995 FA Cup. After being found guilty of some financial naughtiness the previous year, the FA dished out an array of harsh punishments which included exclusion from the competition. Then Alan Sugar brought in some heavy-hitting barristers, and a few weeks before the third round they were readmitted, by order of the court.

Altrincham and Sunderland were beaten with comfort, then a replay was required to get past Southampton. But thanks to four goals in eight extra-time minutes at the Dell, they made their way through to the quarter-final and a game against a Liverpool side who, despite being on the downswing from their real glory years, were still heavy favourites. They had only lost once at Anfield that season, curiously enough to Ipswich who would go on to lose 9-0 at Manchester United and finish stone bottom of the table.

But there was little doubt who the game was a bigger deal for. This was simultaneously something of a free swing for Spurs, but it was also a game that suddenly gave their season meaning, given the circumstances of them being in the tournament and their disappointing league campaign. Liverpool were out of the title race by that point but had secured a spot in the League Cup final a few days before: Tottenham, on the other hand – this is all they had.

Around 5,000 Spurs fans made the trip, filling the Anfield Road End, and those that didn’t get a match ticket (£15) piled back to White Hart Lane to watch a ‘beam back’ (£12), because remarkably, this game was not televised.

“It was a classic FA Cup battle,” remembers Tottenham’s captain, Gary Mabbutt. “We were the underdogs going to Anfield: they had Rush and Fowler up front with John Barnes in behind them. We knew their strengths were going forwards, but if we could nullify their frontline we thought they were vulnerable in defence. So we pushed Darren Anderton into the middle to create more trouble in front of their back four.”

Manager Gerry Francis, called in earlier that season after the great Ossie Ardiles caper had failed, had another tactical trick up his sleeve, asking Ronnie Rosenthal to play high on the left and peg back Rob Jones, at the time the best attacking full-back in the country.

For a manager who was appointed to curb the worst attacking excesses of the Ardiles era and bring a bit of stability to the team, it was a brassy move by Francis. Away at Liverpool, picking a team with Klinsmann and Sheringham up front, a right-winger in central midfield, a forward on the left wing and the not-exactly-defensive Nick Barmby on the right. David Howells, as the only midfielder with any real cautious instincts, looked in for a long afternoon.

1st thought in your head?

Liverpool took the lead seven minutes before half-time, when Mark Walters was permitted a free run through the Spurs defence, crossing for Robbie Fowler to head home. That was his 28th goal of the season, a breakthrough year which at the time looked like the start of a great, record-busting career.

Klinsmann was on his way to 29, but had been playing pretty badly to this point, missing a relatively simple chance in the early stages, and his marker would probably have liked to think it had something to do with him.

“A Liverpool player made fun of me at the beginning of the game,” Klinsmann told the German journalist Hans Blicksendorfer. “He did it all too stupidly anyway. When I fell down, he copied me, and played ‘The Diver’. And whenever I missed a shot he would hold his head in his hands like a world champion who could do better. These were foolish pantomimes which the people didn’t enjoy at all.”

Then, in a reveal Colleen Rooney would be proud of: “The player’s name was Neil Ruddock and he was a star at Spurs before he went to Liverpool.”

“That was Neil Ruddock’s game, to wind up players he’s playing against,” says Mabbutt, “That’s the person that Neil is. So it would not surprise me if he was trying to get Jurgen wound up. Fortunately Jurgen’s not a man who could be wound up easily.”

Klinsmann had a slightly different motivation in mind: “He must have done it out of stupid envy, but I think I answered him in the best way possible.” Quite so. Just before the break, Howells played what was almost a sensational defence-splitting pass, taking the Liverpool midfield out of the game with one swing of the leg and putting Klinsmann through. The forward took a rare poor touch, trying to create space for a shot but in fact knocking it too far back, forcing him to stop on the edge of the box.

But while he had to stop, that meant the Liverpool defenders did too, screeching to a halt like cartoons on an ice rink. One of them was Ruddock, not the most nimble at the best of times, and in the time it took him to hammer on the brakes, Klinsmann had a chance to assess the options.

Actually they didn’t need much assessing, as the perfect one presented itself, Sheringham arriving on the scene with the perfect timing that would define his career. If you watch his run from the start, he seems to be heading in a direct, arrow-straight line to the place where Klinsmann would eventually lay the ball off, despite the fact he couldn’t possibly have anticipated that when his partner received Howells’s pass. Yet there he was, as his brain had known for years where the ball would be, his legs were simply completing the formalities. Some players just know.

The short, four or five-yard pass was perfect, Sheringham not having to break stride, but because of the angle Ruddock and Phil Babb closed him down, there was only about two square feet of net in the top right corner he could aim for. Fortunately, this was Teddy Sheringham. It was the dictionary definition of picking one’s spot, Sheringham gently opening his body so he could pass the thing beyond what could only be described as a despairing dive from David James.

“This FA Cup sixth-round tie probably ranks as my most memorable game for Spurs,” Sheringham told FourFourTwo years later. “I was delighted with my equaliser, which I bent straight into the top corner. We matched Liverpool in the second half and, in the last minute, just as it looked like a replay was on the cards, I flicked a ball through to Jurgen Klinsmann who went on to score.”

Now, Sheringham is doing himself a bit of a disservice there. As the clock ticked down, Liverpool made a mess of a throw in their right-back position, Anderton hooked it back towards the box and, for the second time in the game, Sheringham demonstrated the delicate artistry of forward play with the most subtle flick round the corner, outside of the right boot, perfectly weighting and placing the pass for Klinsmann before the Liverpool backline had figured out what was going on.

“The partnership with Teddy was one of the most enjoyable experiences I had in my career,” Klinsmann said in ‘The Team That Dared To Do’, a book about that season by Francis and Chris Slegg. “We were always there for each other. This was a goal we scored as a partnership. It was a lovely flick from him and then I just had to put it away.”

Again, that’s playing things down slightly. Klinsmann’s job was made relatively easy by Sheringham but he still had to put the right weight on his first touch and finish, as he was racing towards goal in front of the Kop with 90 seconds of an FA Cup quarter-final remaining. Fortunately, this was Jurgen Klinsmann.

“That was the sort of occasion he was made for,” Anderton told Slegg. “Quarter-final of the FA Cup, last minute, one-on-one, Klinsmann? Never any doubt.” On the BBC commentary, John Motson wailed “It’s Klinsmann for Tottenham!”, as he utilised the humble toe-punt to tuck the ball into the bottom corner, tearing off with that familiar look of slight astonishment on his face, as if he can’t quite believe it was him scoring this goal. Anderton tackled him to the ground, and the rest of the Tottenham contingent lost the run of things for a short spell.

Klinsmann nearly lost something else too, apparently. ‘Teddy Sheringham says his abiding memory of the game,’ wrote Slegg, ‘is of Klinsmann only just managing to stop himself from throwing up after scoring because of the emotion of the occasion and the effort he had put into it. “The match exhausted all of us mentally and physically,” he says. “For me, that was the standout game of the season.”‘

“I was surprised to get the chance because we all thought it was going to a replay,” said Klinsmann straight after the game. “I had a lump in my throat at the end because the Liverpool fans gave me a standing ovation. That was wonderful, such a sporting thing to happen.”

More or less everyone who talks about that game remembers the home crowd sticking around, waiting for the Spurs players to finish celebrating with their own fans so they could applaud them off the field. “Top marks to Tottenham,” said Roy Evans afterwards. “Give them credit. They deserve it.”

Klinsmann also made reference, as a few others did after the game, to an upcoming trip to Wembley, which wasn’t an episode of premature chicken-counting, rather the expectation that the semi-final would be played there. Alas, the FA announced that the games would be held at neutral venues, partly due to poor attendance figures there in the previous two seasons. Instead Spurs faced Everton at Elland Road, a game which still rankles a little with Mabbutt. “They gave Everton fans three sides of the ground and we only had one,” he says. “It was like an away game.” Spurs lost 4-1, Everton going on to beat Manchester United in the final.

But this game, though. “On the coach back to London, nobody slept as they usually do,” Klinsmann told Blicksendorfer. “Everybody was wound up like a bunch of teenage lads who had just got away with some mischief.” And in the context of that season, that’s exactly what they had done.