Home F365 Features The Sun and The Times: 14 Hillsborough questions 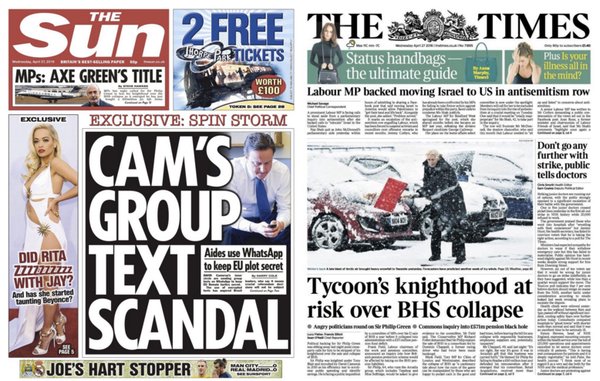 On Tuesday, an inquest in Warrington answered 14 questions regarding the death of 96 people at Hillsborough in April 1989. The following day, in their first editions, neither The Sun nor the The Times included any reference to the inquest on their front pages. So here are 14 more questions for them:

1) When did the role of a newspaper stop being to report news? They have always contained opinion, of course, but to ignore the major news story of the day is to make a bold admission that you are more interested in an agenda than fact.

2) What did you hope to achieve? Does not reporting on the facts change them? Of course not. In a digital age where 99% of those who would buy your papers on Wednesday would already have heard the news, ignoring the issue only makes it stand out more.

3) And what did you think it would do to your writers, some of whom are from Liverpool and will know people affected by that sorry day? Did you not stop to think how let down they would feel?

4) Twelve years ago, The Sun issued an apology. What do you think the actions of Tuesday night do to that apology, other than making it look mealy-mouthed. It simply appears, unfairly or otherwise, that lessons haven’t been learned.

6) Even if you were taking some editorial stance, standing together with the decisions made in the past as some warped display of togetherness, did you not even consider the PR sh*tstorm that you were creating? For people working in exactly that environment, how could you be so dim?

7) While the alteration of The Times’ first and second edition finally demonstrated some wherewithal to climb down over the gaffe, do you think that is enough?

8) Will buyers of the second edition of The Times now be flapping about which ‘status handbag’ to purchase?

9) Or was it the 11am verdict that caught you off guard? It can be tough when games go to penalties, after all.

10) Given the coverage given to ‘The Truth’ headlines, a story that you swallowed directly from police and later admitted to be false, wasn’t this the ideal time for The Sun to apologise unreservedly to those families affected, and those victims who you besmirched? Do you not realise that you lost your final chance, however slim, of changing the mood in Liverpool? Instead of leaving the past behind, you held hands with it while walking off into the sunset.

11) Even if you intended to ignore the ‘Justice for the 96’ angle, do you not think that it would have been sensible to at least toe the line on the legal angle? Even away from the story of human resilience, this was the conclusion of the longest inquest in British legal history.

12) Do you feel that official apologies should be made to the families? That they deserve at least to not feel like an afterthought?

13) Will those apologies be published any further towards the front of your papers than page 12?