Home Mediawatch The Sun embarrass themselves over Solskjaer, Pogba and Pep 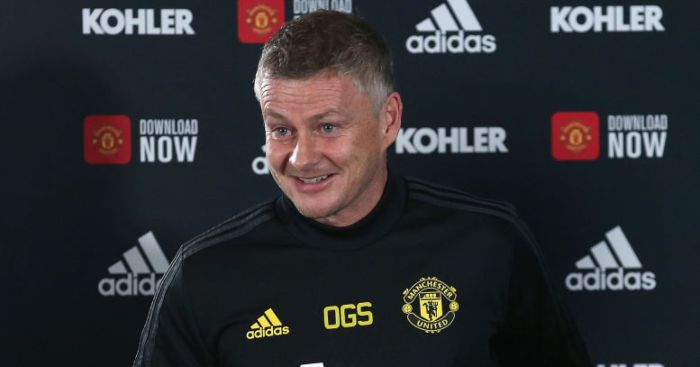 Neil on the Ed
‘Ole Goner Solskjaer’ reads the back-page headline on The Sun, who have been sitting on that one for almost a year now. They use it to tell us that Manchester United’s manager ‘made it clear how precarious his position was’ by informing his players that defeats to Tottenham and Manchester City this week will see him sacked.

Mediawatch barely has time to recover from the blow of a Neil Custis and Richard Moriarty exclusive not describing United as ‘flops’ to ruffle through six pages to find the rest of the story. You can see how much they value their own inside information when it is deemed less worthy than mocking up Pep Guardiola in a dentist’s chair and placing a clearly happy Brendan Rodgers on the ‘MANAGER MERRY-GO-ROUND’.

It is by the seventh paragraph that Solskjaer’s ‘warning’ and ‘fears’ seem a little questionable:

‘Executive vice-chairman Ed Woodward has made it clear he will stick with Solskjaer no matter what as they embark on a rebuilding programme based on academy products.’

You need a new source, fellas.

Tell me sweet little lies
How handy that Custis was in attendance for Solskjaer’s press conference on Tuesday morning, during which the Norwegian was asked directly about The Sun‘s exclusive. His answer?

“I’m good, absolutely no problem, sometimes you laugh when you read stories about what I’ve said, but at least I know the sources are not sources and are just made up, blatant lies.”

How curious that Custis makes no mention of those quotes whatsoever in his latest story, claiming merely that Solskjaer ‘was putting on a brave face’.

Aye, and calling out your bullsh*t. Try harder. Do better.

Like pulling teeth
You did indeed read ‘mocking up Pep Guardiola in a dentist’s chair’ right. The Sun dedicate a two-page spread to a throwaway line because Britain’s best-selling newspaper is officially a comic.

Nobody:
Absolutely nobody:
Not a damn soul:
Pep Guardiola: Playing Burnley away is like going to the dentist lol
The Sun: pic.twitter.com/YsQ8w8JRPs

There’s the caption of ‘MOUTH GUARD…how Pep would look at dentist’, as if our collective imaginations simply could not picture him in such a situation.

There’s the ‘MAN CITY DENTIST XI’, containing Carlo Gnasher, Drill Foden, Surgery Aguero and Adrian Teeth, the latter of which required about ten minutes and plenty of research to work out. Oh, and they’re managed by Roberto Munchini.

There’s the fact this is given a double-page spread that greets you as soon as you open the sports section.

But our absolute favourite bit is that Neil Custis appears to have murdered and subsequently flogged this poor horse on the basis of Guardiola warning his players in April, immediately after beating Manchester United 2-0, that “you know it’s going to hurt at the dentists at Burnley” four days later

The rabbit hole has essentially consumed us, but…it wasn’t even Guardiola who said it! pic.twitter.com/yDNSKBYvvk

No way, Jose
Custis is a busy boy. He returns to claim that Manchester United supporters ‘may well wonder why they let him go’ when Jose Mourinho is back at Old Trafford on Wednesday.

Those with incredibly short-term or selective memories, absolutely.

‘There were few tears spilt after Manchester United axed him 11 months ago.

‘Apparently, he had sucked the life out of the place, failed to tap into the club’s famous DNA and played boring football.’

‘Apparently’, dismissively writes same man who said ‘What came out of the mix just was not Manchester United’ a day after he was sacked.

‘Some even said he was a footballing dinosaur. But Mourinho’s return as new Tottenham boss tomorrow – to face a United side down in NINTH – might cause a rethink.’

A reminder that United were as many points behind the Champions League places – eight – when he was sacked as they are now.

Beats it
There is sympathy for The Times, who name no names in their report on Solskjaer having ‘rebuked his players over their match-day dress after they started turning up in unauthorised attire’.

By the time this reaches The Sun’s website – sorry, but the barrel contains plenty of fish – there is a picture of Paul Pogba front and centre, as well as the following two sentences:

‘The report does not name any players in particular.

‘But Paul Pogba has in the past been seen arriving wearing Beats By Dre headphones and a £145 Icon beanie hat.’

Well then it’s absolutely alright to suggest he’s the one who’s been b*llocked despite him not even having been part of a matchday squad since September, with Solskjaer telling his players off in December.

Lovely touch with the price, too.

Buck Rodgers
‘As he spoke ahead of tomorrow’s visit by rock-bottom Watford, it was easy to lose count of how many times Rodgers said he was happy at Leicester’ – Graham Hill, The Sun, December 3.

‘BRENDAN RODGERS has opened the door to Arsenal after admitting there is a clause in his contract allowing him to leave if a big offer came in for him’ – Duncan Wright, The Sun, December 2.

‘Why would a manager leave Leicester, or Wolves, to work for Stan Kroenke at this time? How would an employer sell modern Arsenal to the chosen target? Do they have a vision, a philosophy, do they have the necessary investment, are expectations married to what is realistically achievable?

‘The answer to each of these questions is no’ – Martin Samuel, Daily Mail.

‘How would an employer sell modern Arsenal to the chosen target? No.’ What? – Mediawatch.

Alli oop
‘At this rate, a midfield of Grealish, Alli and Maddison could be on the cards for England next summer – we could call them Boyz II Men’ – Stan Collymore, Daily Mirror.