'Are you a footballer who needs to talk?'. It's fair to say that The Sun are revelling in their work on this one... 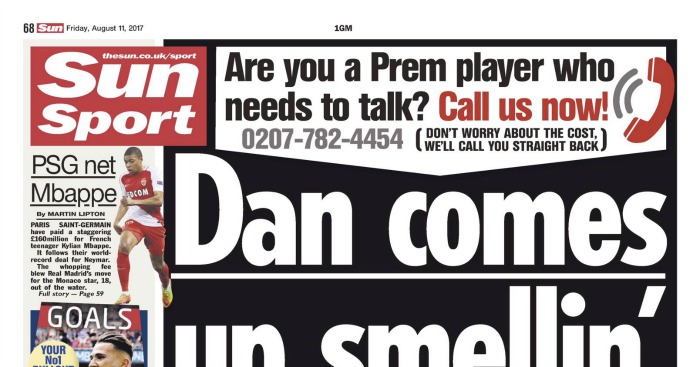 Whatever your thoughts on the Danny Rose story (and Daniel Storey offered his own here), there is no doubting that it was a fine scoop for Dave Kidd at The Sun.

Kidd interviewed Rose on a number of occasions during his time at the Daily Mirror, and had clearly built up enough of a rapport that when Rose wanted to get a few things out into the open, Kidd was the man he called. Fair play: that is top journalisming.

By Friday, The Sun are revelling in their scoop. Not only do they again make Rose their back page story, which is entirely fair and a lead followed by other papers, they trumpet their own role in the story.

It’s a ballsy editorial move putting the newspaper’s phone number on the top of the back page in big letters, but another entirely to mock up an ‘Are you a footballer who needs to talk?’ message, in the style of a Samaritans advert. Is that in good taste?

It also comes close to mocking Rose for being unhappy while still be handsomely rewarded. That tone is continued with the ‘Don’t worry about the cost, we’ll call you back’ line. Dear me.

Still, having got the exclusive interview with Rose, Kidd is not about to leave his man high and dry now. His latest exclusive is that Rose was given a ‘hero’s welcome’ at Tottenham training from a ‘mutinous’ group of players, which is quite the line. So to is: ‘Rose was slapped on the back by fellow players, keen to applaud him for airing his views so starkly. Some said they wished they had done the same months ago, while others threatened to break rank and do the same themselves.’

Inside the paper, Kidd mocks Gary Neville for tweeting ‘WTF is Danny Rose thinking?’, labelling him part of a ‘hate mob’ that don’t want players to speak their minds.

The whole thing, predictably, is headlined as ‘the story that that’s rocked football’. We only hope that The Sun tastes good, because there is an awful lot of self-licking.