Home Mediawatch The Sun, Liverpool and writing off 2019 already… 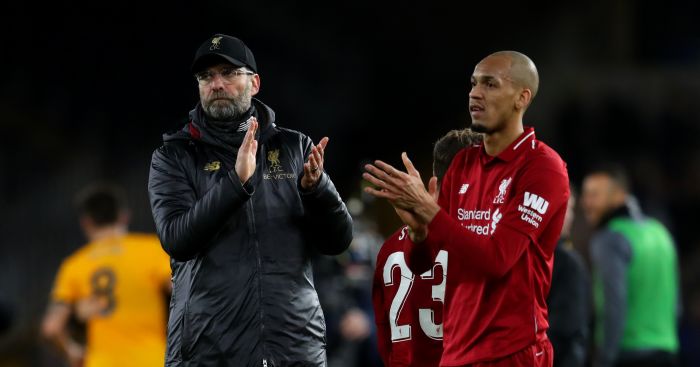 It’s important to remember all this when you read Neil Ashton’s Sun match report from Molineux.

‘THIS was supposed to be Liverpool’s year.’

‘They could not wait to see in 2019, to bring home the Premier League and maybe throw in an FA Cup for good measure.’

Again, it’s January 8. And they are still four points clear at the top of the Premier League.

‘Well Liverpool, with the eyes of the world on them at Molineux, are having a little wobble.’

Are they? Or have they just sent a pretty much second-string XI to a very good mid-table side and lost a game?

‘A week ago Klopp’s side were having it all their own way as they pulverised Premier League rivals. They look like a different side now.’

That’s because they are literally a different side; they made nine changes and then lost Dejan Lovren after just a few minutes.

‘That eye-catching playing style, refined during their 20-match unbeaten Premier League run, deserted them. At times Liverpool looked like strangers.’

Ashton’s piece ends as we absolutely knew it would end…

‘They are still without a win this year.’

Cesc Fabregas: Not all that
‘CESC FABREGAS has been a great player and a fantastic talent for Arsenal, Barcelona, Chelsea and Spain over the years. But I do look back on his career and wonder if there could have been more.’

It can only be Stan Collymore, the ‘man who always speaks his mind’, in the Daily Mirror.

He then lists his trophies – a World Cup, two European Championships, two Premier Leagues, two FA Cups and La Liga, as well as a handful of smaller trophies – which certainly reads like he might have done quite well.

‘But ask yourself how many times he was the central plank in the teams for whom he was playing when he won those honours.’

We have asked ourselves and decided that special Spain team was probably built around Xavi and Andres Iniesta rather than Fabregas, but that doesn’t seem like the biggest stick to wield at a man who was actually named in UEFA’s Team of the Tournament in 2008, created the goal that won the 2010 World Cup and scored the winning penalty to take Spain through to the final in 2012.

Obviously, all of that passed Stan by. He’s too busy speaking his mind to do any actual research.

‘Maybe he was key in Arsenal’s 2004-05 FA Cup win, and maybe he was influential in one of Chelsea’s title-winning seasons.’

‘But those teams would still have won those trophies even without Fabregas in the side.’

Yep. If Fabregas had been unavailable, Jon Obi Mikel would have just stepped in and created 18 Premier League goals.

‘So the Spaniard is still a rung down from true Premier League greats, such as David Silva. Dennis Bergkamp, Eric Cantona and Thierry Henry.’

Which is odd because it’s little over a year since Collymore wrote that ‘David Silva is a very good player – a special player, in fact. But I’m struggling to buy into this notion he will be remembered as one of the Premier League’s all-time greats.’

He struggles with an awful lot of notions, that Stan Collymore. And not always the same ones.

Talking of which…
Stan Collymore, August 2018, Daily Mirror: ‘The clock is ticking on the European transfer ­window and if it closes with no Real Madrid ­dramas around Eden Hazard then Chelsea fans will be happy. So too will Hazard because he’ll be where he wants to be for the next season at least – in his Chelsea comfort zone.

‘Don’t get me wrong, I like Hazard and think he’s a top, top performer – a rare breed of player who can turn a game with his pace and skill. In full flow he’s a dream to watch, almost poetry in motion, but he could be so much more.

‘That frustrates me and it leads me to question his ambition.’

Stan Collymore, January 2019, Daily Mirror: ‘I see Chelsea’s Eden Hazard reaching a level at the Bernabeu that Eriksen could not. By fine margins, of course, but the Belgian just seems a more likely fit for the attacking Galactico model and has a ‘Wow!’ factor I don’t see in the Tottenham man.

‘Hazard would probably feel it was his God-given right to play for Real Madrid – certainly there has been a whiff of that in the way he has been so open about wanting to go there.’

From lacking ambition to cocky in just a few months. It’s the full Stanley Victor U-turn.

Paying attention
‘If Real do push the button on taking Eriksen from Tottenham or Hazard from Chelsea this summer then the one thing we can be sure of is the heralding of a new dawn in La Liga. Because for either to be a marquee signing at Real or Barcelona shows things are changing at the top clubs’ – Stan Collymore, Daily Mirror.

The one thing we can be sure of is that Stan Collymore missed Barcelona breaking their transfer record for Ousmane Dembele and then Philippe Coutinho.

Cherry-picking
The Daily Mail’s Martin Samuel – for some reason no longer suggesting Eddie Howe as a possible next manager for Manchester United – is instead praising Bournemouth for signing Dominic Solanke. ‘Good luck to them for keeping faith in young English talent,’ he writes.

Let’s be honest: They signed Dominic Solanke for £19m because they are in rotten form and got desperate.

‘Why Manchester United won’t move for Philippe Coutinho in the January transfer window’ – January 8, 5am.

Recommended reading of the day
Tariq Panja on Athletic Bilbao

Daniel Storey on another young, black man (because that’s his thing)