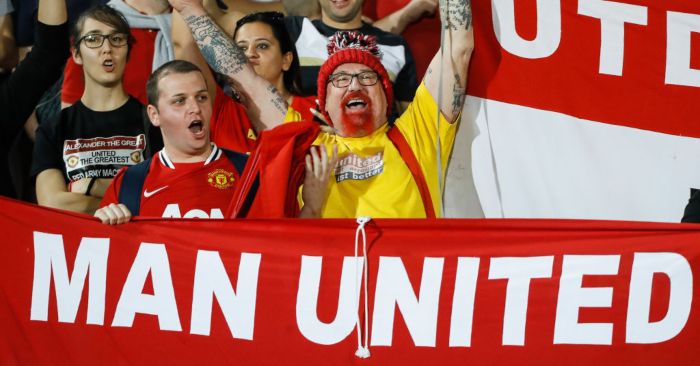 ‘Uefa are poised to hit the club with a misconduct charge over the explicit flag – mocking Belgian striker Origi’s manhood’ – Charlie Wyett, The Sun, October 24.

No. No. No. No. No. What once seemed like one journalist’s lack of understanding and empathy now comes across as a dangerous and disingenuous company-wide misrepresentation of actual racism. And for Britain’s best-selling newspaper, that’s bloody worrying.

Liverpool themselves have literally said it “perpetuated a racist stereotype”. Stop tabloidising everything and please: Just. Use. Those. Words.

Phoning it in
Also…

I have to celebrate you, baby
The Sun‘s back page revels in the first away win of Ole Gunnar Solskjaer’s permanent reign. Neil Custis says that ‘on a night when the Busby Babes were remembered, Manchester United’s young players did their club proud’.

Their player ratings – both in the newspaper and online – give James Garner a 6/10, and Brandon Williams a 7. We’re not sure United can claim that STAR MAN Phil Jones (8/10) is a youngster any longer at 27.

‘If there have been any positives since Solskjaer’s reign took a dramatic downturn, it has been in the blooding of young players.’

Mediawatch will ignore Custis’s attempt to crowbar Daniel James, a £15m summer signing, into the above group, and simply point out that Marcos Rojo has played almost as many Premier League minutes (120) as Mason Greenwood, Tahith Chong, Angel Gomes, Garner and Williams combined this season (121).

How much ‘blooding’ can you really do against a team fifth in the Serbian league?

‘Have no doubt, this was a tough encounter for United against a side unbeaten at home in 11 games in European competition.’

Have no doubt that that run is comprised of three draws, six qualifying round wins and just two victories in the Europa League proper, both of which came in November 2017.

‘That was their only shot on target but the visitors deserved praise for the way they kept Partizan out and went top of Group L.’

How remarkable that a defence featuring a £85m centre-half and £45m right-back managed to restrict Serbia’s fifth-best side, that lost 1-0 to a team level on points with the relegation zone in their last league game, to just 15 shots.

Dat Serb
The Sun website gives up any pretence of offering in-depth and interesting analysis by bringing us the following:

‘Jones was swapped for Dzons’? 😂

‘Martial was misplaced for Marsijal’? 😂

‘McTominay was left out for Mek Tominaj’? 😂

You see, ‘the home fans were too busy cheering to notice, but seven of the eleven names included were spelt wrong.’ How very embarrassing.

Thank the lord that Twitter – and subsequently The Sun, given that social media is their second-biggest source of news behind………Rebekah Vardy’s account – noticed ‘the technical issue’. Joe Miles is kind enough to let us know that ‘MANCHESTER UNITED’S starting line-up got lost in translation’.

Well, no it didn’t. It just got translated. Into phonetic Serbian. Because of where they were playing. As it turns out English isn’t the only language in existence.

It didn’t get ‘lost’ on anyone at all, unless you’re being wilfully stupid.

Wait until The Sun hears that it shouldn’t actually be spelt ‘Jurgen Klopp’.

‘A few days ago, Ashley Cole announced that he wants to be a “top manager”.’

Good for him. He retired about two months ago so it’s a while away, but there’s no reason he can’t be a great success someday.

‘Last week he said: “I want to be the best. In three, four or five years, hopefully I can be a top manager. I want to emulate people like Frank, or JT…and Stevie G. Credit to them.”

‘Lampard, Terry and Gerrard, who all happen to be white, found work at lightning speed.’

They also all happen to have started their coaching qualifications while they were still playing, with Lampard and Gerrard completing their courses before their first managerial appointments. Cole only started his course shortly before his August retirement.

The point that Cole ‘has just as much to offer’ as those three in particular is perfectly justified when based solely on their respective playing careers. But this is just too much…

‘If Lampard, John Terry or Gerrard had lifted silverware in such a short space of time there would have been a stampede.’

He guided Chelsea, an academy loaded with incredible talent that pretty much hoards silverware at all ages, to the prestigious U15 International Tournament 2019/20 trophy. Not to denigrate the achievement, but come on, man.

‘He is working under Frank O’Brien and Ian Howell…’

…so he’s not even in charge?

‘And his body fat was less than six per cent, one of the lowest on record for an elite-level footballer.’

Give him the England job.

‘He can also pass on some lifestyle tips after getting caught up in a celebrity bubble during his marriage to Girls Aloud’s Cheryl.

‘When Ancelotti’s lawless regime (Ed – a Premier League and FA Cup double in his first season before being sacked for finishing second) was in place at Stamford Bridge, Cole shot a work experience student with an air rifle during a training-ground ‘joke’.’

Sorry, what were these ‘lifestyle tips’ he is passing on to the next generation?

After telling us that Cole is ‘happy enough’ to be lowering himself to such tasks at ‘putting out the cones for the drills’, as if a century of international caps means he is above such menial jobs, the puff piece ends with a fair declaration that Cole ‘can tell’ players ‘what it takes’ to become excellent. Because that obviously makes you a great coach. Just ask Thierry Henry.

Dunn deal
Writes Andy Dunn in an otherwise great article on why Harry Kane might as well stay at Tottenham instead of moving to Manchester United for ‘a better chance of glory’:

‘Yet still there are people out there – most notably Roy Keane – who believe Old Trafford would be a good home for Harry Kane. Where do you want to start?

‘Larger salary? Yes, United could offer Kane the sort of largesse they gave to Alexis Sanchez. But there is no reason why Spurs cannot match those sorts of rewards.’

It is safe to say that ‘Britain’s best sports writer’ is not entirely au fait with the financial practises of either team. Or with the existence of Ed Woodward and Daniel Levy.

Recommended reading of the day
Andy Hunter on Burnley.