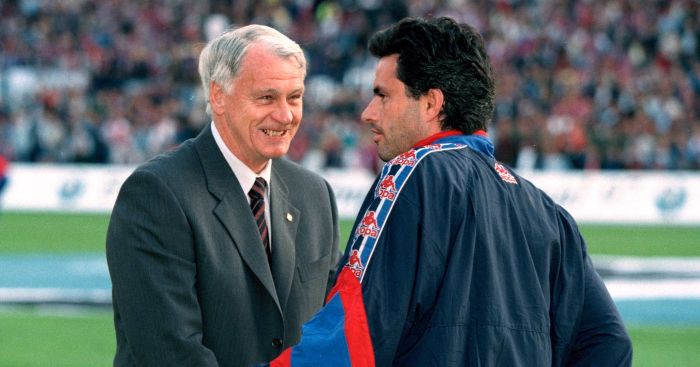 He may have been gone just over a decade now, but Sir Bobby Robson’s legacy remains as vibrant as ever.

The Netflix film about his life, released last year, revealed the true extent of how much he was loved, with contributions from world stars such as Ronaldo, Gary Lineker and Pep Guardiola.

He had an impact on all that he met, including a young Canadian who came across Bobby during his Sporting Lisbon days.

Davide Xausa was just 15 when he travelled from his home in Vancouver to begin a trial with the Portuguese giants.

He was given the opportunity thanks to the relationship Bobby had with Canada national coach Bruce Twamley – the pair worked with each other at Ipswich Town.

“Its quite an amazing story,” he tells the Talkin Fitbaw podcast.

“I got a call in the summer from Bruce. He said ‘Dave, I have an opportunity for you to go to Portugal’. First thing I did was open the atlas and look where exactly I’m going.

“He spoke to me about it and said I have an opportunity to train with the (Sporting) youth team for three months.

“I lived in the José Alvalade Stadium and Bruce told me Bobby’s there and I was like ‘Who’s Bobby?’ I was a 15-year-old kid coming from Canada, where people don’t even know we play soccer.

“I landed in Lisbon and they’d given me some directions about where to go and I get to the bus stop outside the airport. They’re like ‘there’s this guy who’s going to meet you, he’s our translator, he speaks English perfectly so he’ll help you out.’

“I’m standing there with my suitcases and this gentleman walks up, very handsome man and says ‘Davide, Welcome, I’m José, I’m Bobby’s translator, we’re very excited to have you’.

“We all know who the José was, it was Mr Mourinho.

“At that time he was a translator, he was a wonderful guy, he was always watching and always studying but he was Bobby’s right-hand man.

“Bobby and I became pretty close, we spent a lot of time together. I stayed with him for a little bit in his flat, he’d go golfing and I’d caddy for him. It was an amazing time.

“After three or four months they sat me down, I was kind of torn at the time, I liked being there but I was a young kid away from home. I always said if I wasn’t going to play pro I was going to go to university, get a good degree and build the business or something in the future.

“They offered me a three-year deal and I decided to come home. I think people thought it was a huge missed opportunity and maybe it was, but I don’t look back with any regrets.

“It was honestly three of the best months I’ve ever had. I look back now and tell the story and people look at me and go ‘yeah sure that happened’, but yeah it happened.

“Probably the most surreal thing of all – and I think this kind of shows the person Bobby was: Bobby wrote me a letter when I left.

“He wrote me a two-page letter saying what a pleasure it was to get to know me and I think you’re making a big mistake. I only read the front half of that letter most days because I don’t want to read the back where he says you’re making a mistake.

“I know he’s got such a great following and such a great reputation but seeing it first hand and the kindness of the man to a young Canadian kid that he really had no reason to be so kind to was pretty amazing.”