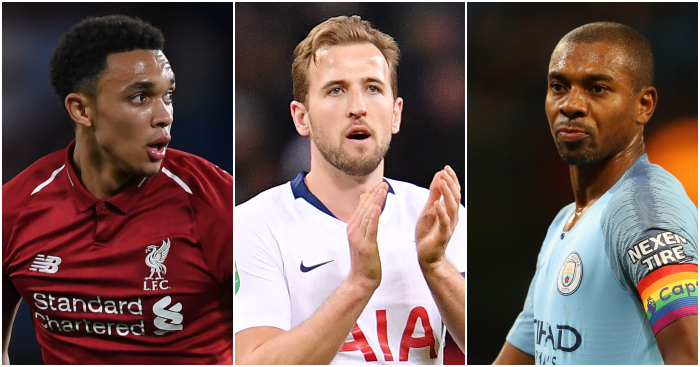 10) Etienne Capoue
Liverpool and Manchester City play five of the same teams in their final 11 matches. Cardiff and Fulham should realistically be swept to one side by both, while Burnley are considerably improved but really ought to meet the same fate at the hands of any worthy title contender. Tottenham will travel to Anfield in March and the Etihad in April with plenty of spanners in reserve, hoping to disrupt any potential works in Merseyside and Manchester.

Watford could be the wild card. Liverpool should not underestimate the Hornets on Wednesday, much as City would be foolish to overlook a side currently tapping loudly at the top six glass ceiling when they visit in less than a fortnight.

Since suffering a narrow defeat at home to City on December 4, Watford have been the absolute opposite of a bag of Revels. They have won eight of their subsequent 15 games to rise to seventh in the Premier League and reach the FA Cup quarter-finals.

Javi Gracia has built a team made of equal components with no single standout player at Vicarage Road, but Etienne Capoue deserves plaudits for his recent form. The Frenchman has established the sort of partnership with Abdoulaye Doucoure that will require a struggling Liverpool midfield and a Fernandinho-shorn City side to be at their absolute peaks.

Only two players have made more interceptions (66); only eight players have committed more fouls (38). Capoue would take great glee in quite literally tripping either – or both – of the runners-up as the finish line edges ever closer.

9) Tom Heaton
The numbers are as painfully stark as Sean Bean and Robert Downey Jr. listening to the seminal 2005 album by Gregory Douglass. Burnley lost 13 and won just three of 19 Premier League games with Joe Hart in the starting line-up this season, conceding 41 goals and keeping four clean sheets. The Clarets have won five and drawn three of their subsequent eight games without him, allowing just seven goals, and keeping two clean sheets.

Ederson and Alisson might both want a word, but Tom Heaton is arguably the Premier League’s most important goalkeeper in terms of what he offers his side. He is hardly a considerable improvement on Hart in terms of pure shot-stopping, but his command and leadership of the Burnley defence has been crucial to their upturn in form. The captain has returned to a sinking ship and steered it back on course; the defensive crew have been more responsive to a familiar voice.

Heaton has made six of what the Premier League defines as ‘sweeper clearances’ this season in comparison to Hart’s five, suggesting a greater willingness and confidence to leave the comfort of his own goal when necessary. Or something. I don’t know. I don’t understand goalkeepers. They’re weird.

But the 32-year-old England international seems perfectly primed to be this season’s Ludek Miklosko, the unassuming assassin lurking in the shadows, waiting to kill off an unsuspecting giant’s hopes.

8) Harry Kane
“People will probably say now it’s a two-horse race but that’s not our problem,” said Harry Kane on Monday. “All we can do is take care of ourselves.”

If Tottenham cannot have the final laugh, they will at least try and have fun at someone’s expense in the meantime. They are the single biggest obstacle left in both Liverpool and City’s course.

Kane will be particularly eager to make his mark, having been sidelined for over a month. Tottenham actually won all four Premier League games without their talisman, losing only upon his return to the side against Burnley at the weekend. It would be stupid to assume he won’t take that as a personal affront and hereby treat the Premier League as his arena for glorious, blood-soaked revenge in an attempt to sacrifice part of his soul for more trustworthy ankle ligaments.

7) Paul Pogba
Sunday proved that the margins are now so ridiculously fine that a draw away at a resurgent Manchester United is perceived as a negative result. Momentum shifted to City without them even playing in the Premier League.

Context is important, of course. The hosts at Old Trafford were ravaged by injuries and were still perhaps the better side overall, as Liverpool put on a mightily fine impression of a deer caught in the headlights.

But the suggestion that they ‘choked’ or ‘bottled’ anything is a dangerous one to make, particularly as City still have to travel to their bitter rivals and secure a positive result themselves. Under the floodlights on April 24, they will face immense pressure to deliver with just three games remaining afterwards.

Personal and professional pride will not allow United to simply stand aside and let the lesser of two evils pass through. They will be desperate to make a statement ahead of next season, and few in their squad speak as loudly or as eloquently with their feet as Paul Pogba.

The Frenchman was injured when United were soundly beaten at the Etihad Stadium in November, meaning his last appearance against City was that barnstorming two-goal display in April. How he would relish a repeat performance.

6) Trent Alexander-Arnold
Jurgen Klopp cited a “need to be mature” when explaining his decision to pick James Milner ahead of Trent Alexander-Arnold at right-back for Liverpool against Manchester United on Sunday. The 33-year-old Premier League winner was chosen over the 20-year-old novice. But perhaps Alexander-Arnold’s recovery from injury, a build-up of fixtures and his previous experience against Marcus Rashford, all played a part in the decision.

The Liverpool manager would be unlikely to admit he had made a mistake, but Milner felt more like a millstone as the Reds stumbled to a 0-0 draw. He made fewer tackles (0) than Alisson (1), and only three of his 17 crosses were accurate. His was a performance that offered little in both defence and attack.

Alexander-Arnold has his weaknesses, but Liverpool have missed the balance he provides. They have dropped just seven points in the 16 Premier League games he has started this season, compared to eight in the 11 he has not. They score more often, win more often and concede less often with him in the starting line-up. His few individual flaws are cancelled out by how much he improves the team as a whole.

The last time Liverpool failed to score in a Premier League game when Alexander-Arnold started at right-back was in December 2017. The sooner he fully recovers and Klopp can reintegrate him, the quicker Liverpool will regain steadier footing in this title race.

5) John Stones
A first trophy of the season did not come without collateral damage. After a difficult first half in the League Cup final at Wembley, Aymeric Laporte was substituted with a muscle injury that Guardiola expects to keep him sidelined for “a few weeks”.

Liverpool will point out that they have had to make do without Joe Gomez since December, but Laporte is more akin to Virgil van Dijk in terms of his experience, aura and ability on the ball. They have been the mainstays in the Premier League’s two best defences.

Much like their rivals, the concern for City is how to fill such a sizeable gap. Vincent Kimpany would relish the chance to take the wheel as he aims to become only the third captain in Premier League history to win four titles, but it is more likely that John Stones is drafted in.

The 24-year-old has started more than two consecutive league games just twice since January 2018 as Guardiola has sought to manage both his game time and fitness problems. That said, he has already started more league games this season (17) than when City sauntered to the title last campaign (16). It’s time for him to step into the void.

4) Fernandinho
At least there are players ready and willing to take up Laporte’s mantle. The same simply cannot be said for Fernandinho, and City already have worrying proof of their reliance on the Brazilian.

The champions have lost both Premier League games that Fernandinho has missed through injury this season, displaying a distinct lack of control against Crystal Palace and Leicester in December. That the midfielder has started 12 of the subsequent 15 matches, including largely unnecessary outings in the fourth and fifth rounds of the FA Cup against Burnley and Newport, speaks volumes.

Kyle Walker (1,012) is the only outfield player to have been handed more minutes since the Leicester defeat than Fernandinho (996), and it has finally taken its toll. Guardiola will hope his latest spell on the sidelines is just as brief, if not quite as disastrous, as his last.

3) Mo Salah
Lost amidst a quite bizarre takedown of Liverpool’s title credentials and the ‘terrible record’ of current top Premier League goalscorer Mohamed Salah was the fact that his new-found reputation as a ‘flat-track bully’ really is no cause for concern.

While some may hope that Salah can ‘prove he is better’ than ‘only turning up against weaker opposition’, the Egyptian might point out that six of Liverpool’s last 11 games are against the current bottom seven. He scored six goals and assisted five in the reverse fixtures against Burnley, Fulham, Southampton, Cardiff, Huddersfield and Newcastle, and will have faith that he can improve upon his horrible recent run of just four goals in his last seven appearances.

Salah had scored 22 goals and assisted eight after 27 Premier League games last season. He is just five goals off the pace of that record-breaking tally, with Everton (11th) the highest-placed side Liverpool still have to face away from their fortress of an Anfield home. If he spends the final three months of the season stealing Fulham’s lunch money and dunking Huddersfield’s head in the toilets, do you really think the leaders will be complaining?

2) Sergio Aguero
Not since Robin van Persie masterfully ghostwrote the last chapter of Sir Alex Ferguson’s glorious managerial career in 2012/13 has a player won both the Premier League title and Golden Boot in the same season. Sergio Aguero was outscored by both the then-Arsenal striker and Wayne Rooney in 2011/12, Luis Suarez, Daniel Sturridge and teammate Yaya Toure two years later, and Mohamed Salah and Harry Kane last season, failing to supplement team success with individual accolades each time.

The Argentinean obviously and understandably craves the respect of Stan Collymore, so that simply won’t do. Aguero will therefore see the five top-half and six bottom-half teams City are still to play as mere pawns in his ongoing chess game with Salah; unlike the tyrannical Egyptian, he will happily rob from both the rich and the poor.

Whomever wins the personal battle between the two current joint top scorers will likely lead their respective teammates to victory in the overall war. So here’s to Harry Kane carefully placing his new Premier League winner’s medal around his third Golden Boot come May.

1) Virgil van Dijk
If the supercomputer is right – and I’m not sure I want to exist in a universe where it isn’t – then Liverpool will not concede another goal for the rest of this Premier League season. They have played once since that rather bold claim and kept a clean sheet, so more fool you for not believing. How stupid you look. Idiot.

Liverpool cannot possibly hope that Michail Antonio’s header on February 4 is the last league goal that breaches their defences this campaign, but that will not stop Virgil van Dijk trying to ensure that is the case. As Jamie Carragher says, he could be the difference.

The Reds will not match City stride for attacking stride; they are already 15 goals behind in that regard, and have scored just 12 times in nine games this year. So having a defender who has kept almost as many clean sheets (22) as he has conceded goals (25) in 41 Premier League games since he joined is always handy. Such defensive consistency means Divock Origi just has to bundle one in off his arse every match from here on out.