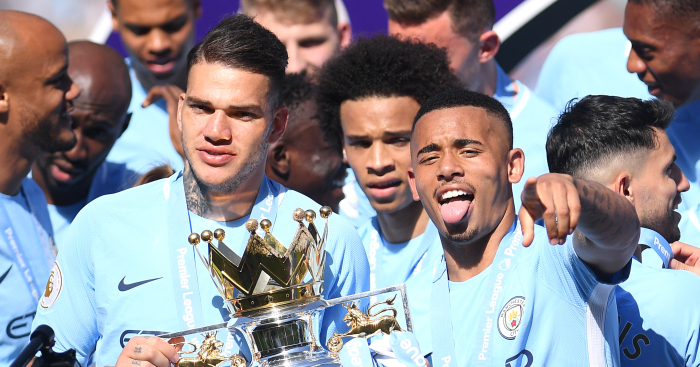 Edu (79 games) and Ricardo Carvalho (135 games) – 69.6%
As a member of the Invincibles who jumped the ship before it started to sink towards the seabed, professional Unai Emery lookalike Edu is the only Arsenal representative on this list. He joined in January 2001 when the Gunners were on course to finish second, before featuring in the title-winning seasons of 2001/02 and 2003/04. Two more runners-up spots in 2002/03 and 2004/05 meant the Brazilian midfielder never finished lower than second over five seasons in the Premier League. Of his seven defeats in 79 games, two came in his first half-season. And two weirdly came against Blackburn.

Ricardo Carvalho recorded a similarly impressive win percentage, but in 56 more games. He won the Premier League title in his first and last of six seasons, with another coming in between. Six of his 13 league defeats in England came under Jose Mourinho, with two losses inflicted by Middlesbrough of all clubs. Manchester City beat Carvalho more times than any other side (3).

Javi Garcia – 70% (53 games)
Often considered one of the worst buys of Manchester City’s money-spinning era, Javi Garcia was arguably not even the worst player to rock up at the Etihad Stadium on the day he joined. Roberto Mancini embarked on the most underwhelming of all transfer deadline day splurges in summer 2012 by bringing in the midfielder alongside Scott Sinclair, Maicon and Matija Nastasic.

Garcia did not technically manage to last as long as Sinclair or Nastasic, but he made the most City appearances of that quintet. He was never anything more than a bit-part player over two seasons but left in 2014 with a Premier League title and League Cup for his troubles.

Michael Ballack – 70.4% (105 games)
Having been accused of “playing with a huge cigar in his mouth” by Alan Hansen in his first season at Chelsea, Michael Ballack cannot claim to have started his Premier League career as he meant to go on. He was injured for the FA Cup final success over Manchester United in 2007, finished as runner-up in the Premier League, Champions League, FA Cup, League Cup and European Championships, and was made to wait until his final season for his first league title. The German was only ever on the losing side against six different sides in England, losing thrice to Tottenham, twice to Liverpool and Manchester City, and once each to Arsenal, Everton and Manchester United. He was never beaten by a side in the bottom half.

Nemanja Vidic – 70.6% (211 games)
The reportedly murderous Serbian lost his Premier League debut for Manchester United, but it was never a feeling he would have to get used to. From January 2006 to May 2013 he established himself as one of the absolute best centre-halves in the game, never losing more than four games in any of those eight seasons. Then came Southampton botherer David Moyes and the 2013/14 campaign, where Vidic played in a grand total of eight league defeats and started to show his advancing years. His win percentage before his final season was 73.6% (137 wins from 186 games), dragged down a whole 3% by one measly year.

Claude Makelele – 70.8% (144 games)
One of the greatest French imports in Premier League history was also one of its most successful of any nationality. Claudio Ranieri described Claude Makelele as Chelsea’s “battery”, while Jose Mourinho dubbed him one of his “untouchables”. Whoever the manager, the midfielder played so crucial a role that he had one named after him. His brilliance is so everlasting that even his most viable successor, N’Golo Kante, cannot quite match his win percentage (65%) despite winning two of a possible three Premier League titles.

Paulo Ferreira – 72.3% (141 games)
There is a reason Jose Mourinho made Paulo Ferreira his first Chelsea signing. One of just eight players the Portuguese has bought more than once, Ferreira was an ordinary right-winger before converting into a solid, reliable right-back who, in his former manager’s words, “will never be man of the match but will always score 7/10 for his individual display”. He won 12 trophies at Stamford Bridge, three of which were Premier League titles, before retiring in 2013, but quite cleverly ensured he barely played in 2011/12 or 2012/13 when Chelsea were a bit rubbish in the league.

Leroy Sane – 73.9% (112 games)
Is it a coincidence that Leroy Sane was only a substitute in the two Premier League games Manchester City have failed to win this season? Perhaps. The German has beaten 23 of the 25 different teams he has faced in England’s top flight, struggling only to get past Wolves and Middlesbrough – neither of whom he started against. He has beaten every other opponent at least once, with Arsenal and Bournemouth (five defeats each) his most regular victims.

Gabriel Jesus – 82% (50 games)
He might be in the midst of some quite horrible form, but Gabriel Jesus can console himself with the third-highest win percentage of any Premier League player with more than 50 appearances. The Brazilian finally passed that threshold with a rare start against Bournemouth at the weekend, where he marked his ninth league game without scoring. His only defeat in England’s top flight came against Manchester United in April, with 41 victories coming in the other 49 games.

Arjen Robben – 82.1% (67 games)
When you think of Jose Mourinho’s first Chelsea spell, you evoke memories of that enviable spine of Petr Cech, John Terry, Frank Lampard and Didier Drogba. You think of the Portuguese contingent, or Khalid Boulahrouz being the most fleeting of mad bastards. You do not immediately think of Arjen Robben.

As understandable as it is, that really is something of an injustice. Robben was near unstoppable across three seasons, with injury the only thing capable of slowing him down. The Dutchman remains one of the absolute best Premier League players with fewer than 100 games, beating all 24 sides he faced and winning every domestic trophy possible before leaving for Real Madrid. His spell was as excellent as it was ephemeral.

Ederson – 84% (50 games)
Fifty games, 25 clean sheets, 32 goals conceded, 42 wins, six draws, two defeats, one Premier League title and countless critics confounded. Ederson joined Manchester City as the world’s most expensive goalkeeper, but helped the football world realise the importance of the man between the sticks. He has conceded more than one goal in just four of 50 Premier League games, and does not seem in danger of slowing down any time soon.