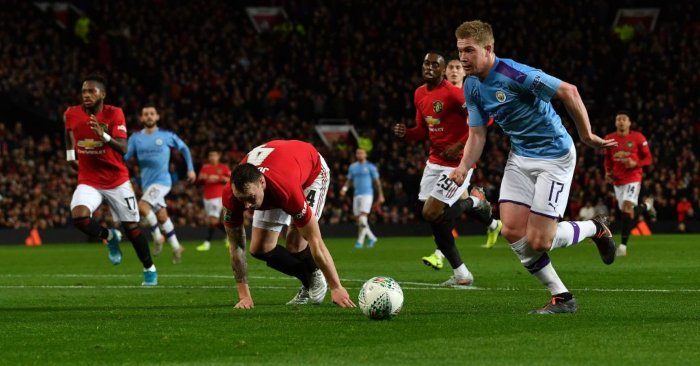 Give. Him. Time
I haven’t written in for a while but ‘Even the lowest bar is way above Man Utd’ article has irritated me enough to give it a crack. The clear issue here is expectation;

Why would you expect a team missing its two best midfielders (McTominay and Pogba sigh) to stem a midfield consisting of De Bruyne, Gundogan, Rodri?

Why would you expect United to beat City at all in the current environment?

A lot of this bashing is based on perceived position, United in a footballing sense are nowhere near City. I don’t know who is out there claiming that they are but it certainly isn’t any United fan I speak to.

United need to find a way back to the top, we have tried hiring a mid table manager and he took a Premier League winning side out of Champions League spots. We tried hiring a masterful tactician with a footballing philosophy and we got boring football and big name signings. We tried going to the dark side and hiring Jose and got a dressing room mutiny. Ole at least is trying something different, young British players who aren’t playing (or sitting on the bench) for a pay check. It may work, it may not, but what is the alternative?

Pack it all in and start again with someone else who will bring something completely new and probably fail too?

Start spending big on players who don’t want to play for us, but want a huge contract?

Give him time, accept that we are in for a rough ride, but success doesn’t come quickly or painlessly….just look at that Red lot down the road, they play some good football you know and they were a bit rubbish for a few years until that happened.

Here is a clue: Next year will not be our year
Mik, MUFC

Solskjaer’s about to be slaughtered in the mailbox, let me provide some Phil Jones quality defense for him.

Just imagine, the british airways pilots have decided to go on strike asking for better retirement benefits. BA are scrambling to find short term replacement pilots while they negotiate with the pilots. They knock on my door, “son, we’ve seen what you can do in ace combat, we think you are a good fit to fly our boeing 777. We will pay you half a pilots fee to fly for a while.”

I personally know I don’t have the experience but I’d never say no to the opportunity. Half a pilots salary would serve me well for a couple of months. I’m also supposed to take 6 months on the simulator, all good. I start killing the lessons in the simulator and the instructor say’s I’m ready in 3 months based on my simulator scores. I’m allowed to fly commercial. Personally I’d still not say no because I assume, the people at BA know better than giving unqualified people a commercial plane to fly, so if they give me a 3 year contract I must be good.

6 hours into the job, I have caused the biggest congestion and delay in the history of Heathrow, because I didn’t know how to properly back out the plane, and while trying to get out of the jetbridge, hit 2 planes, one on the left, and the right, and a food carrier truck, thus closing the entire terminal b. Plus the dude waving the sticks is a new addition. When the airport authority start their investigation, I’m pretty sure I’d get off scot free, because at no point did I misrepresent my qualifications. I was clearly not qualified. However, BA and the hiring crew would have hell to pay.

It’s the same thing with Ole, he is masterminding a car crash, but it’s not his fault, The people who put him there are the real culprits, and until they leave, Solskjaer should remain.
Dave(It’s like watching the demise of Olympic Lyonnais, I would not have thought the 7 time ligue a champs would go this long without winning), Somewhere

* Sarah’s basic premise was Pep out played someone so that person should be sacked if that happened every-time Pep played someone there would be several unemployed coaches all around the world.

* Ole deserves some of the blame of course he picks the team  he also could have expected that Pep was going to react .

*In the end however whoever is Utd manager is still going into most gun fights holding  a water pistol.

* And that water pistol right now is the Lingard Andreas axis they aren’t number 10’s, No one is sure what they are .Get a new number 10 or give Gomes  a new contract and play him there.

* Overall  team in 2nd beats team in 5th to get closer to final but hey narrative and all
Roode, MUFC

Those poor supporters
I’m not sure if it’s allowed to feel sorry for a rival fan base, but after watching last nights League Cup Semi Final I truly did feel sorry for United fans.

Manchester City picked them apart, a superb goal from B.Silva, an excellent turn to dummy Phil Jones from KDB which lead to the O.G and it could’ve easily been more than just the three scored, then afterwards OGS comes out and wants to “invoke” the spirit of PSG, you shouldn’t need to, because you shouldn’t be in this position, with the financies and backing United have they should never have been allowed to get into this state, I don’t know to much about the inner workings at Old Trafford but what I do know is Solskjaer is not the man to take United forward.
Mikey, CFC (I still hate we lost KDB, but I appreciate watching him player, a true maestro)

Wheely good
Surely Ole has lost his licence and been banned from driving for life due to the amount of crashes he has had whilst at the wheel?
Ryan, Liverpool

I think the chap who said Ole is at the wheel of Fred Flintstone’s car was being way too kind.

He’s not even passed his theory test by the looks of it, and is most definitely driving without a licence.

Any competent instructor would’ve told him driving is not for him and returned his lesson fee’s to buy a bus pass.

Sell Jones
So if Phil Jones knows he’s awful enough to not get a testimonial, why the heck doesn’t he just give up his contract and professional career? Does he not feel guilty for pocketing £100k a week and turning out those displays?

Two goals were his fault (largely) and the Lindelof mistake was made worse by the country mile between him and Jones.

Do the honourable thing Phil: terminate your contract and walk away.
Ben, Up T’North

Keep Pereira (but actually sell Pereira)
Man United clearly can’t sell off all of their midfielders, bar McTominay, at one go this Jan transfer window, or even the next. Who would they play in the middle? But don’t fret, my dear Man Utd fans, because at the time of writing, Pereira just scored his second goal of the current season and is now behind only McTominay for goals scored from the central midfield berth. He has outscored both Pogba & Fred this season!

I say keep him.
Veni (You guess it, LFC)

Sell Lingard (and many other neutral thoughts)
Taking a step back and evaluating last nights game from the perspective of a neutral:

1. United are improving. Some of the one touch build-up and speed of play in the second half looked very promising. Granted, City had tailed off by that point, but it points to a alternative style of play that firmly contradicts the “Ole can only use counter attacking tactics” narrative.

2. Brandon Williams has the potential to be a champion left back, and should undoubtedly be first choice over Luke Shaw. Pace, tenacity and aggression. A Jack Russell of a left back.

3. Solskjaer was out manoeuvred by Pep. A more decisive manager may have made changes at 2-0 rather than dithering until half time.

4. The correct change was made at the break, as Matic was key in changing the flow of the game. He brought control, experience and bravery on the ball in midfield, suggesting not only that he may still have a future at United, but that Ole can actually make effective tactical changes; whether Solskjær can learn to be ruthless is a bigger question, and one that will define him.

5. Surely Jesse Lingard’s last game for United. Game after game, Chance after chance for 18 months for a Peter Pan footballer. The time has come to shoot the metaphorical puppy. See point #4 re: ruthlessness from the manager.

6. Angel Gomes is a dilemma. Looked supremely comfortable in possession and playing on the half turn, but United already have an embryonically young starting XI, not to mention that without Pogba and Mctominay they also lack strength, experience and aerial threat. But, continue leaving him out, and he leaves on a free…

7. I doubt any United manager has ever possessed such a supermodel-thin squad – or a lack of midfield quality. I am reticent to jump across the border in to “Ole out” country given the tools he has to work with, but he needs to a) be more decisive and b) stop constantly shrugging his shoulders in the post match interview!! A sign of weakness!!
Rob S

Everton’s spending
Reading Ted, Manchester’s rebuttal today I snickered a bit when he mentioned Wolves, Leicester, & Everton on how we do transfer windows.  Not because he’s dead on about how we (Everton) used to do it under Moyes, but my thoughts on how we’re now trying to be like United and splash the cash now that we have it.  Let’s look at some of our recent signings:

Sandro – Only 7M but wages in excess of 80K/week

I could go on and on but my point is that Everton finally got a bit of cash to spend where the big boys spend and we promptly wasted it.  Our match against the Liverpool Reserves in the FA Cup was just the final icing on the cake of not only abject humiliation, but how bad Walsh along with Koeman & Allardyce got it dreadfully wrong and how long it’s going to take Ancelotti to fix this mess.

Maybe Everton can go back to finding the Cahills, Carsleys, Artetas, Gravesens, and Gueyes of the world for less.  We shall see.  But like Ted, I’d like to see Everton get back to doing transfer business, well, like how Everton used to do it.
TX Bill (that lot couldn’t have beaten Liverpool’s U16 team) EFC

Foster child
After reading Peter Goldstein’s most recent excellent article on Ben Foster, I want to take the time to say thanks again to all at F365 for your consistently high quality of content over the past 11 years of visiting the site daily.

As ever, please keep up the great work!
James Jones, STFC (the only bias I’ve seen on this site over the years is a bias against underperforming football teams in the comment pieces, and against shoddy journalism in Mediawatch)