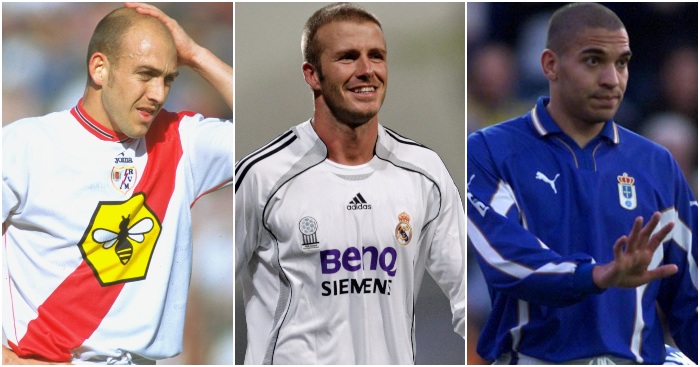 Kieran Trippier has now completed his move to Atlético Madrid, becoming the first Englishman to represent the club in its 116-year history. Although Danny Mills is worried he might “slip off the radar” in Spain (that well-known footballing backwater), to most of us it is refreshing to see an English player leave the Premier League bubble and have a crack at La Liga. There are 135 Spaniards to have played in the Premier League since its inception, but just ten Englishmen have played in La Liga in the same period, with varying degrees of success. Here we take a look at the ten who blazed the trail for Trippier…

10) Charlie I’Anson (Elche 2013-2014)
Probably the least familiar name on this list, Charlie (as he is mononymously known in Spain) was born in Luton but raised in Málaga after his parents moved there when he was a child. After starting his career at Grimsby Town, the defender returned to Spain to join Elche in 2012 at the age of 19. He made two appearances for the Alicante-based side after their promotion to La Liga in 2013, and to date these remain his only top-flight appearances. After leaving Elche in 2015, he had spells at Valencia B and Granada, and is now a key player for Real Murcia in the Segunda División B.

9) Mark Draper (Rayo Vallecano 2000)
When Draper fell out of favour at Aston Villa in 2000, his quest for first-team football took him to the slightly left-field destination of Vallecas. He played four times in an unremarkable loan spell for Rayo, scoring once, before returning whence he came. The most noteworthy episode of his short spell in Spain was his doomed attempt at speaking the local language. “Permiso, permiso” he would shout to his team-mates, believing he was asking them to pass him the ball. In fact, he was shouting “driving licence, driving licence”.

8) Patrick Roberts (Girona 2018-2019)
Manchester City’s perennial loanee Roberts spent last season at City Football Group-owned Girona, with the hope that competitive top-flight football would help with his development. In truth, it didn’t quite pan out like that. Roberts only managed six starts and emerged from the bench 13 times, but he failed to make the impact that he and his parent club would have desired, and didn’t register a single goal or assist as the Catalan side slipped to relegation.

7) Jermaine Pennant (Real Zaragoza 2009-2010)
Pennant elected to join Real Zaragoza in 2009, craving a fresh start after having been released by Liverpool. But as was so often the case throughout his career, poor performance and ill-discipline marred his time in Aragón. Punished by the club for turning up for training late three times in a fortnight, it was clear Pennant didn’t want to be in Spain, and he left the club for Stoke after one underwhelming season. His defining moment in Zaragoza was leaving his Porsche parked at the railway station for five months after forgetting he owned it. It’s by no means the worst thing he’s done involving a car, but it’s still pretty bad.

6) Stan Collymore (Real Oviedo 2001)
Just five years after becoming the most expensive English footballer ever, Collymore’s career had taken a sharp downturn amid periods of off-pitch controversy and struggles with mental health. He was transfer listed by Bradford City at the start of 2001 in an effort to reduce the wage bill, and found himself an unlikely new home in the north of Spain. Given a hero’s welcome on his arrival in Asturias, Collymore was unable to find form or fitness, and retired from football altogether just over a month after his arrival in Spain. He played just three times for Oviedo, and failed to trouble the scorers.

5) Jonathan Woodgate (Real Madrid 2004-2006)
Woodgate’s spell in Spain is the stuff of legend, but for all the wrong reasons. He was an unusual signing for Los Blancos at the height of the galáctico era, but he was an undeniably talented player who had the potential to be one of the best defenders of his generation. Unfortunately that potential was never realised in Madrid. It got off to an inauspicious start as he famously scored an own goal and was sent off on his debut, and it didn’t get an awful lot better as he spent most of his time at the club on the treatment table. Voted the ‘worst signing of the 21st century’ by readers of Marca in 2007, it is a shame that a man of his talents is remembered as a laughing stock in Spain, but there can be no denying that his spell in Madrid was not a happy time for El Woody.

On this day in 2003 Jonothan Woodgate finally made his Real Madrid debut, after an own goal he was sent off in one of the worst debuts ever pic.twitter.com/8yzepTuaqw

4) Michael Owen (Real Madrid 2004-2005)
Owen looked like he would be a good fit when he followed England team-mate David Beckham to Real Madrid in 2004. Still just 24, he would be the fourth Ballon D’Or winner in the squad, alongside Luís Figo, Zinedine Zidane and Ronaldo. But he found it difficult to break into that talent-laden side, and more often than not found himself on the bench. He still managed a respectable 13 league goals in his solitary season at the club, but his short spell in Spain can only really be viewed as a disappointment.

3) Vinny Samways (Las Palmas 2000-2002, Sevilla 2002-2003)
Samways was in a bit of a rut when he left Everton for Las Palmas in 1996. The Londoner struggled to settle in the north-west after his move from Spurs, and after a couple of loan spells in the old Division One, he was offered a permanent home in the year-round sun of Gran Canaria. He settled well and became a popular figure at the club, helping them back to the top flight and taking the captain’s armband along the way. After six years at Las Palmas, he moved to Sevilla where he played for a season alongside the likes of Dani Alves and José Antonio Reyes. He still lives in Spain to this day, and acted as a broker in the recent takeover of Las Palmas by an American consortium.

2) David Beckham (Real Madrid 2003-2007)
By far the most famous player on this list, Beckham was a key part of the ‘galáctico’ side that was assembled at great expense by Florentino Pérez. His performances in general were pretty good, but it was a relatively barren era for Real Madrid in spite of their massive outlay. Beckham won the club’s player of the year award in 2006, but was frozen out of the team in January 2007 after announcing he would be heading to LA Galaxy the following summer. His professional attitude in training gave manager Fabio Capello little choice but to recall him to the side, and his contribution proved vital to Madrid’s title-winning campaign – the only major title Beckham won in his spell at the Bernabéu.

1) Steve McManaman (Real Madrid 1999-2003)
Beckham may be the most famous Englishman to play in Spain in the modern era, but McManaman is the most successful. He arrived in Madrid on a free transfer at a time when the club was experiencing plenty of dressing-room disquiet, but he won the respect of his manager and team-mates for his professional attitude and impressive performances on the pitch. His consistency and bonhomie contributed to Madrid’s return to winning ways, and his haul of two La Liga titles and two Champions League winners’ medals is an impressive return from his four years in Spain.

A trophy he lifted on two occasions for Real Madrid… pic.twitter.com/beimFHXaG5