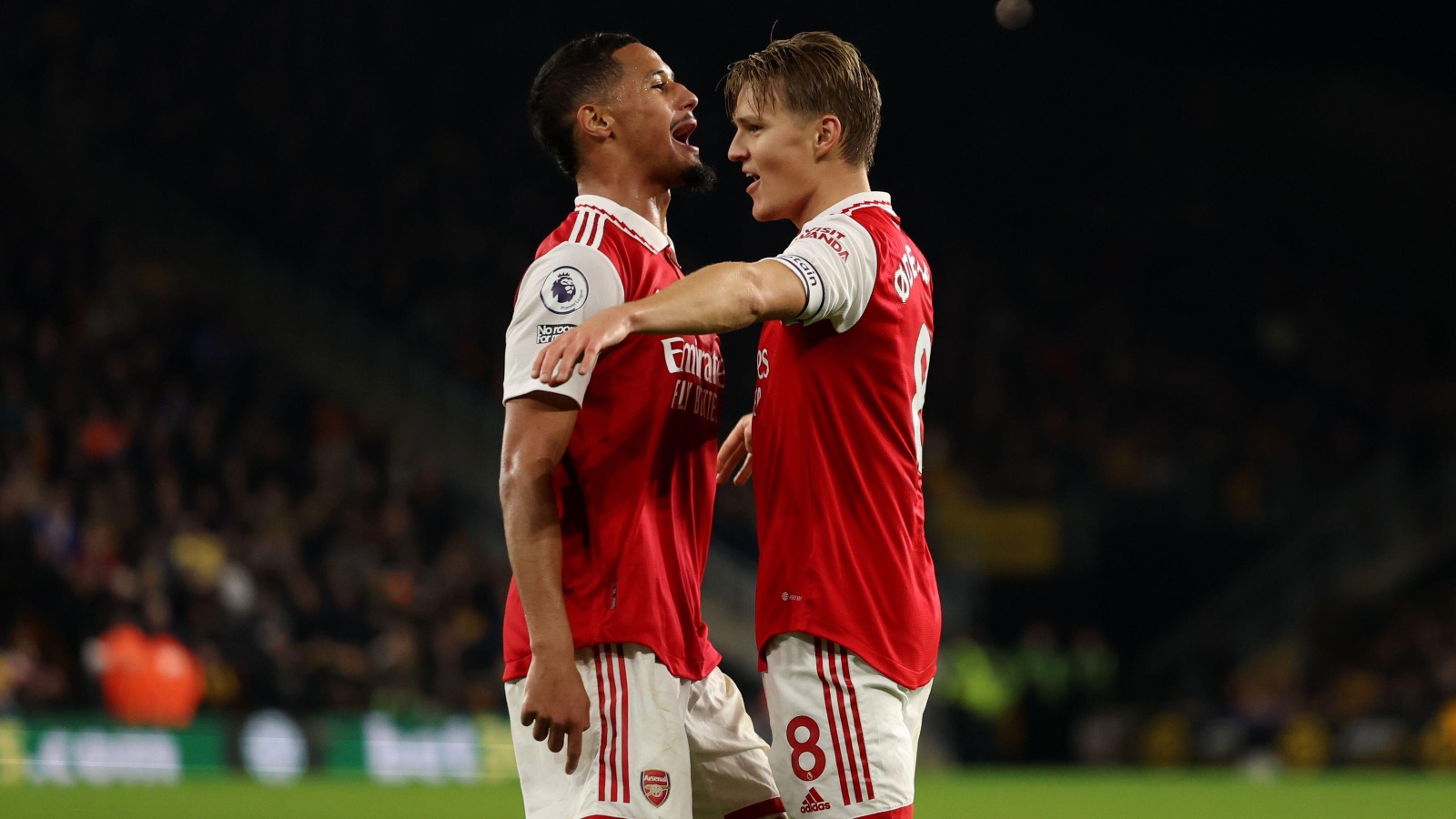 As we await the return of the Premier League on December 26, let’s take a look at who impressed in the first ‘half’ of the season. Few would have predicted Newcastle would be in the top four and even fewer would have had Arsenal leading Manchester City at the top of the table.

Half of the players in this list hail from those two Premier League agencies of chaos. These are the top ten players of the season so far.

10) Rodri
Under-appreciated to the point of appreciation maybe, but continues to fly under the radar, as is his wont and probably what Pep Guardiola wants from his defensive midfielder. He hasn’t got the ‘everywhere-ness’ of N’Golo Kante in his prime, because it’s not required in this Manchester City team.

He can normally be found around the centre circle, stroking passes around as though he’s wearing velvet slippers and nicking possession from the opposition just when it looks as though a break might be on.

9) James Maddison
He realised his dream of going to the World Cup, but we presume part of that dream might have been playing for even a minute at said World Cup. But fair play, his inclusion looked a long way off at the start of the season and to have won Gareth Southgate over despite Leicester’s poor start to the season is good going.

A creator in tight spaces, brilliant over the dead ball and just the right amount of arrogance.

8) Bruno Guimaraes
It took only a few minutes for the Newcastle fans to become infatuated with the Brazilian, and not much longer for that love to be reciprocated. It felt as though Bruno was too good for Newcastle when he first arrived in January, but that no longer seems to be the case, or at least the gap in quality has narrowed significantly, not because the midfielder’s form has dipped but because he’s been dragging the team up to his level.

He seems to have an awful lot of time on the ball, which is always a tell-tale sign of a very skilled operator, and he rarely loses possession despite his desire to be progressive whenever possible. They’ll have a job hanging on to him despite going great guns.

7) Kieran Trippier
Kieran Trippier has often been seen as a safe choice by Gareth Southgate in front of Reece James and Trent Alexander-Arnold on the right for England, but few could have those same reservations after the 32-year-old’s start to this season.

We’ve been spoiled somewhat by Alexander-Arnold, through his outstanding ability to pass, cross and cause problems for opposition defences, but also because we now accept that a full-back can be one of the best in the world by doing one aspect of the game far better than the other. Trippier does this remarkable thing where he attacks and defends, and is bloody good at both of them.

6) Martin Odegaard
We won’t claim Odegaard’s a magnificent captain, because it’s pretty hard to tell from such a serene on-field presence, but his team-mates all seem to like and respect him. And there’s no doubt they’re doing a hell of a lot better with him leading the side than Pierre-Emerick Aubameyang, who – let’s face it – fall-out with Mikel Arteta apart, was always an odd choice.

But we will claim, with the evidence of this season in particular, but arguably ever since he arrived at Arsenal, that Odegaard is a magnificent footballer. As a child prodigy it would have been so easy to go the other way, but Odegaard is clearly a smart man surrounded by people with his best interests at heart.

He’s a very functional creator, which sounds like a backhanded compliment, but is meant in the way that you can rely on him to create chances. He’s a deep thinker and disciple of Arteta, and you can imagine him cuddling his tactical framework as he drifts off to sleep and viewing players on the pitch like their bits of code in a computer programme.

5) Harry Kane
In any other season we would be marvelling at Harry Kane’s form – 12 goals in 15 games is his best ever start to a Premier League season. Erling Haaland has raised the bar to such an extent that Kane, a player on course to score 30 Premier League goals this season (a feat achieved just ten times in 30 years), isn’t playing second fiddle, rather holding the sheet music while Haaland bows his violin until it smokes.

Just don’t ask him to take two penalties in one match.

4) Miguel Almiron
He’s not alone in the Newcastle squad, but Almiron is the most obvious example of the benefits of good coaching and management. Where opposition teams could previously relax with the ball at Almiron’s feet, as although he may beat a man or two his efforts would ultimately come to nothing, his possession of the ball now spreads panic.

He’s scored some beautiful goals this season and it’s hard not to root for someone who’s so clearly enjoying his football having been the butt of a joke that’s now far funnier after it’s come back to bite the mocker.

3) William Saliba
Other than the golden-haired Norseman, no other summer arrival has had a greater impact on a Premier League team this season.

Saliba’s got the stuff all top centre-backs have always needed – he’s big, strong, quick and can jump – combined with the skill and calmness on the ball generally reserved for more recent Premier League defenders like Thiago Silva and Virgil van Dijk.

He’s also got the arrogance of youth, that may sometimes get him into shtuck, but far more frequently allows us to either swoon or swear, depending on your allegiance or level of envy, at a centre-back doing un-centre-back-like things.

2) Kevin De Bruyne
The best midfielder in Premier League history, you heard it here, I don’t know, fifth? It’s not the brilliance, which many have shown, but the consistent brilliance. He’s got the ability to shoot and score from anywhere, with either foot. He runs past players with and without the ball. But most impressive of all is his ludicrous vision and passing, which is so good that he sees gaps and free teammates before we have the chance to tell him from the stands or through our TV screens, and before those teammates even know they’re an option for him.

He’s assisted Haaland five times this season, and as an offensive pair they’re a cut above.

1) Erling Haaland
The stats say it all and that can be disheartening. Where’s the je ne sais quoi? Does his objective excellence leave less room for joy? Would some fallibility allow us to peel back the machinery and appreciate his artistry?

He probably, and quite fairly, doesn’t give a damn that his arrival in the Premier League has led to some sort of footballing existentialism among the masses. He likes scoring goals and winning, and will continue to lots of both at Manchester City.

READ MORE: What every Premier League club needs most in the January transfer window…