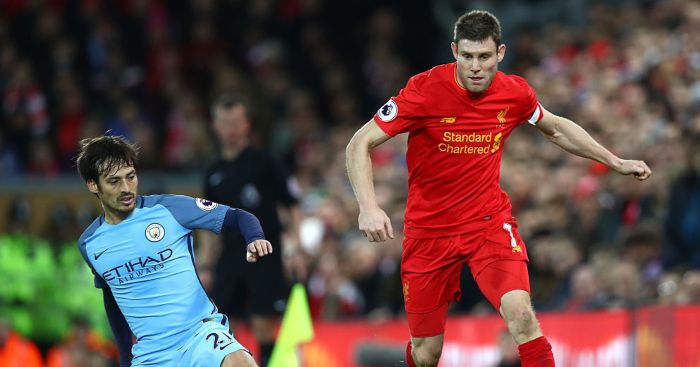 10) Toby Alderweireld
A towering Benelux centre-half who boasted extensive Champions League experience before moving to Southampton, augmenting his reputation further and subsequently joining one of the Premier League’s elite clubs can only be one man. Virgil van Dijk came close, but Toby Alderweireld takes the spot.

There is a danger of trivialising just how brilliant he has been. The 30-year-old was a regular for the Premier League’s second-best defence in his solitary season at Southampton, conceding 33 goals. Alderweireld traded that for the joint-best defence at Tottenham a year later, letting in 35 (and becoming our pick for the alternative player of the year) before they took the crown for their own with 26 goals allowed in 2016/17. For that entire period he was unmatched as a centre-half.

Alderweireld, for whatever reason, has seen his standards slip since, but only from a ludicrous position of strength. A second career Champions League final and injection of Jose Mourinho could inspire him to similar heights as he embraces his theoretical peak years. Van Dijk has raised the bar, but Alderweireld kept it pretty damn high for longer.

9) David de Gea
“I thought the press said the boy was struggling,” said Kenny Dalglish in October 2011. It was muttered through gritted teeth: saves from Luis Suarez, Dirk Kuyt and Jordan Henderson had secured a point for Manchester United away at Liverpool. David de Gea finally seemed to have turned a corner. But he was met with the veritable dead end of a 6-1 derby defeat to Manchester City the following week to set the Spaniard back to square one.

From November to February of the following year, De Gea started just five of 13 league games, culminating in a 3-2 loss to Blackburn in which his failure to deal with a Morten Gamst Pedersen corner allowed Grant Hanley to score. He was promptly – and not without perverse irony – dropped for the first four matches of 2012 in favour of *checks notes* Anders Lindegaard and *checks again* Ben Amos.

Had you said then that De Gea would stay beyond his first summer in Manchester, you would have been greeted with a smattering of dismissive laughter. Had you predicted he would become a Premier League champion, the most prolific winner ever of the club’s Player of the Year award and a PFA Team of the Year mainstay, you would have been asked why such a specific set of criteria had been stated. As a deflection tactic, add that he would hold off the challenge of Joe Hart for the decade’s best keeper because the latter could not kick a ball and then went to Torino for a bit and started being called John.

The scruffy, skinny, scraggy lad from Madrid came, stole a £1.19 doughnut, conceded to Shane Long on his debut and promptly lost his place, then finally conquered. His powers have been on the wane somewhat as we approach 2020, eventually mirroring the much longer decline of his club. But for those years in between, no-one could come close to De Gea; he has kept at least 15 more clean sheets than any other keeper since his false start in August 2011.

8) James Milner
His Premier League decade started in an Aston Villa midfield alongside Stiliyan Petrov, behind Emile Heskey and in front of Carlos Cuellar, Stephen Warnock and Richard Dunne against a side containing Julien Faubert, Valon Behrami and the similarly immortal Mark Noble. It will end as a valued member of the European champions and Premier League winners-elect. A couple of Manchester City titles in between make James Milner an unsinkable island of constant serenity in choppy top-flight waters.

Consider his teammates in the 2009/10 PFA Team of the Year. Four have since retired. One is nailed to the Burnley bench. The rest are scattered around the world, from Zenit St Petersburg to Vissel Kobe, with brief stops at L.D.U Quito, Monaco and Derby, like a list of planned locations for increasingly laboured Hangover sequels. Then there is Milner, as tireless, dependable and square-jawed as he was when he vacated the womb.

There have been better players this decade, ones blessed with more skill, ability, technique and quality. But for longevity and dedication, few come close to matching the 33-year-old. “I think it would not have been possible,” said Jurgen Klopp when contemplating Liverpool’s success without Milner. The same can be said for the Premier League itself, which would presumably have been forced to disband without his perpetual presence.

7) Jamie Vardy
“I’ve just been taking each game as they come. The record wasn’t in my mind,” claimed Jamie Vardy not long after screaming “me, me – all f***ing me” into the King Power Stadium ether. The impromptu message was directed at the Manchester United fans who had spent the previous half an hour or so goading the Leicester forward by chanting the name of his joint record holder. Who van Nistelrooy?

That moment – after he collected a pass from Christian Fuchs, evaded the attentions of Matteo Darmian and fired through the porous De Gea – encapsulated Vardy at his best: a firecracker forward fuelled by port, Red Bull, Skittles vodka and winding up opposition fans. Just ask that one section of West Brom supporters that he constantly taunts at The Hawthorns.

There is enough in his backstory to produce the most delayed film in history. But even a dedicated movie could not really do it justice. Vardy made his Premier League debut aged 26, scored one goal and assisted four against Manchester United on his first start, shattered records and lifted the title in his second season and now, at 32, shows signs of neither slowing nor settling down.

6) Vincent Kompany
No wonder Everton want Mark Hughes. The Welshman need only stroll through the corridors at Goodison Park, reminding everyone he signed Vincent Kompany for £6m rather than Michael Keane for potentially five times as much.

The Belgian is something of a contradiction: a supreme, gifted defender remembered more for his attacking contributions. The header against Manchester United in 2012, the strike against West Ham in 2014, the 2019 tap-in against Leicester and the request for Joey Barton to quote some Nietzsche at Loftus Road – the QPR midfielder swiftly and uncharacteristically declined the offer with a lazy headbutt – epitomised a player uninhibited by the big occasion.

That is not to do the other side of his game a disservice. Were he more durable – 59 games in his final four Premier League seasons suggests otherwise – his claim as the division’s greatest centre-half would be difficult to ignore. As it is, he has earned a part in that conversation.

5) Harry Kane
It takes a certain kind of player to persuade Jose Mourinho not to sign Zlatan Ibrahimovic as they stage a simultaneous raging against the machine of football’s ever-changing culture. Harry Kane is the sort of throwback, unadorned forward both can appreciate, albeit without that same brash demeanour or constant need for attention.

It is an attitude surely inspired not only by the equally understated Tim Sherwood, but through his brief and early journeys outside the Premier League. Kane started the decade on loan in League One with Leyton Orient, transitioning to Millwall and Leicester in the Championship and a Norwich spell that hardly suggested a career out of the ordinary.

Kane would not score until his ninth Premier League appearance, which makes his current haul of 132 goals in 193 games all the more remarkable. And his consistent excellence should not be underplayed: only he, Alan Shearer and Thierry Henry have ever scored 20 goals or more in four consecutive Premier League seasons. Aguero, with a solid head-start, is the one man to outscore him this decade. And what once sounded preposterous – the idea of this chubby Arsenal fan coming close to Shearer’s goal record – now somehow seems probable.

4) N’Golo Kante
His recent tactical transformation completes a rather neat full circle for N’Golo Kante as he approaches his first half-decade of Premier League football. “I watched him two or three times. I started him as a left winger!” Claudio Ranieri once said of his summer 2015 summer signing. “I put him there because during the training session I said I had to find a solution for him.”

Three of his first seven Leicester appearances came in that position before Ranieri afforded him an opportunity to carry the can left by departed Esteban Cambiasso. It was a decision he would only regret when Chelsea ripped the heart of Leicester’s squad straight out. English football would soon have its first player to win consecutive league titles for two different clubs since Eric Cantona.

3) Eden Hazard
Luis Suarez and Gareth Bale’s lights burned brightly but briefly before shining elsewhere. Mesut Ozil and Alexis Sanchez showcased the other side of that gamble as familiarity with their divine talents bred contempt. Eden Hazard is almost unique in that he neither left too soon nor outstayed his welcome.

He might even have timed his departure perfectly, with his final Chelsea season his most prolific in terms of goals and assists. To bookend his seven years with Europa League winner’s medals – and two Premier League titles sandwiched in between – ensured there were trophies to match the transcendental skill.

Hazard’s first three years were great, and his final three phenomenal. He more than earned that exception to the rule plum in the middle. And even in that 2015/16 season, he both scored the goal that won the title and managed to avoid grave bodily harm at the hands of a murderous Eric Dier.

2) Sergio Aguero
It is worth noting that, when Sergio Aguero first graced the Premier League, South America had barely made a lasting mark on these shores. Countries that had dominated the world could not translate that to unbridled success in the English game. For every Javier Mascherano or Gilberto Silva there was a Diego Forlan, an Afonso Alves, a Denilson or a Juan Sebastian Veron. When Manchester City signed Aguero in summer 2011, the continent’s top Premier League goalscorers were Carlos Tevez (69, nice), Gus Poyet (54) and Nolberto Solano (49).

So there was much riding on the shoulders of Aguero, an Independiente star whose brilliance passed the test in Spain. As the most expensive player in Argentinian history in the most high-profile European league at the time, he could not fail.

He is sixth in the all-time list of Premier League goalscorers, two behind Thierry Henry, four off the pace of Lampard and trailing Andy Cole by just 14. Not bad for eight and a half years’ work. Captain, leader, legend, sh*t scout.

1) David Silva
It’s still funny. The notion that David Silva, with more Premier League wins since the start of 2010 than Liverpool (200) and Tottenham (202) and as many as Arsenal (204), could not be considered among the greats was always fanciful and naive. And that is being generous.

Silva’s beauty is not in the numbers. His solitary season of double figures for Premier League goals came when Chelsea strolled to the title under Jose Mourinho. Nor is it particularly in the moments. A neutral would struggle to conjure one abiding memory of his contributions to any of Manchester City’s four titles; the same cannot be said for Aguero, Kompany or even Yaya Toure.

But he has come to define something far greater and wider-reaching: a change in perspectives. It is not long ago that the centre of midfield was a warzone preserved for Roy Keane, Patrick Vieira, Paul Scholes, Steven Gerrard, Frank Lampard and Marouane Fellaini. Silva is the forefather of the shift towards lockpicking rather than bulldozing, of players depending on inherent skill above unerring physicality and gliding past opponents instead of sliding through them. Some might only truly realise what we had once it has finally gone.