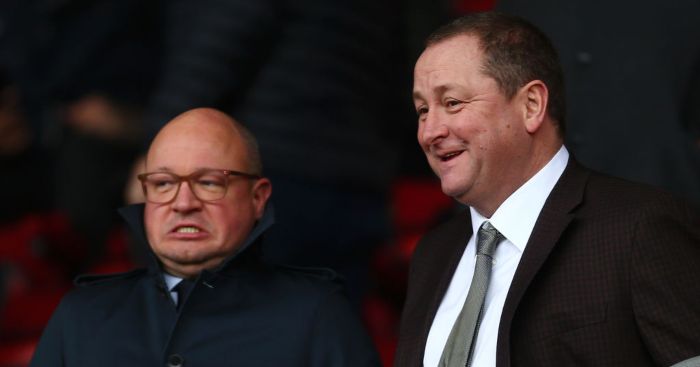 To be clear, these are the worst decisions Mike Ashley has made as Newcastle owner. Thus, being sick in a fireplace after drinking a dozen pints, each followed by a vodka chaser, and paying his Sports Direct employees less than the minimum wage is not included.

10) Turning down Mo Salah
Every club – every owner – has their own personal story of transfer woe. Think Jack Walker’s proclamation that Blackburn don’t need Zinedine Zidane because they have Tim Sherwood, or Arsene Wenger’s failed attempts to sign anyone who has ever kicked anything resembling a sphere. But Newcastle’s story ranks as one of the most regrettable.

“Newcastle will soon make an official offer to sign me,” said Mohamed Salah in August 2011, the 19-year-old having recently impressed for Egypt at the U20 World Cup in Colombia. “I don’t think Contractors will refuse to let me play in the English Premier League. It’s a dream for any player.”

In their biography of the Liverpool forward published earlier this year, Luca Caioli and Cyril Collot shed a little more light on why Newcastle rejected the opportunity. ‘It was true that Newcastle’s scouting team had been after him and noticed his potential,’ they wrote. ‘It was true that Alan Pardew, the Magpies’ manager, would have been delighted to have had Mo in his team, but in the end the negotiations came to nothing and the reason why is far from clear.

‘According to Egyptian sources, everything hung on the fact that Newcastle were not keen to pay £500,000 for the year-long loan. And so, Salah would stay in Egypt.’

They could have had a future Premier League Golden Boot winner and European champion for one-tenth of a Joselu. Ashley carries about £100,000 in £50 notes in his back pocket, for Christ’s sake.

9) We need to talk about Kevin
As a way to curry favour, replacing the unpopular Sam Allardyce with beloved former manager Kevin Keegan was a masterstroke from Ashley just eight months into his Newcastle ownership in January 2008. It got fans onside, unified the club and won media praise in one fell swoop.

It should come as little surprise that he proceeded to smear faeces over a potential masterpiece. Keegan sowed the seeds of dissent at the end of the 2007/08 season, suggesting that “I am not going to get enough money to make major changes at this football club”. Within a month of the start of the following campaign, he tendered his resignation, citing the signing of Xisco and board interference for his decision.

Fan protests, LMA warnings and a series of tribunals followed, resulting in Keegan being paid £2m plus interest for unfair dismissal, and Ashley complaining about damage being caused to his public image. That was just the start, fella.

8) Sacking Chris Hughton
The gamble ostensibly paid off. Newcastle were 12th, four points above relegation, when Chris Hughton was sacked in December 2010, finishing in the same position but seven points above the bottom three come May. The Magpies wanted “an individual with more managerial experience” to “take the club forward” so the 51-year-old was shown the door five days before his birthday. Granted, it’s not quite Trevor Francis, but still.

Alan Pardew, the overwhelmingly unpopular replacement, took the club to fifth in his first full season, but that was the exception that proved the relegation-battling rule: 16th, 10th and 15th-place finishes followed before relegation in 2016. It could all be traced back to Hughton’s unnecessary exeunt and the chain of events it set in motion.

7) Renaming the stadium
Seriously though: the Sports Direct Arena. He should have been arrested there and then.

6) Downing a pint during a Premier League game
Were Mike Ashley to take a seat among the Newcastle fans at St James’ Park against Arsenal on the opening day in two months’ time, the owner would doubtlessly be treated to more right hooks and left jabs than an unwitting police horse. Yet there was a time just over a decade ago that his presence among mere mortals in the stands was not just welcomed, but celebrated.

Just over a year into his reign, Ashley embarked on the journey to north London along with the rest of the Magpie faithful for an August 2008 fixture away at Arsenal. With Robin van Persie having given the hosts a 2-0 half-time lead, Newcastle had to find their entertainment elsewhere.

Cue their new dear leader. As an Arsenal player lay prone on the ground receiving treatment on an injury within two minutes of the second half kicking off, cameras quickly cut to a replica-beshirted Ashley in the crowd. Already roughly halfway through a pint, the subsequent ten seconds were dedicated to him sinking the rest of his beverage without breaking eye contact with the receptacle.

“Michael was offered a drink which he was told was non-alcoholic and he took it in good faith,” read a Newcastle statement defending the 45-year-old, who had contravened Premier League rules over the consumption of alcohol in view of the pitch. Arsenal’s response – that they do not sell non-alcohol beer at the Emirates Stadium – was the perfect finish to an overhit cross.

Less than a fortnight later, Ashley put Newcastle up for sale after a popular manager – Keegan – opted to leave instead of working under his restrictions. Twas ever thus.

5) The 2008/09 season as a whole
Those shenanigans came to encapsulate an entire failed season. Being told that a beer was non-alcoholic by a complete stranger before innocently downing it (and not noticing) within seconds was a fender bender; five different managerial tenures and a first relegation since 1989 was a 427-car pile-up.

Keegan lasted until September 4. Hughton lost all three of his matches in the interim, before Joe Kinnear was inexplicably installed as interim manager for one month. He remained in charge until February, winning five of his 20 Premier League matches and quite literally flipping the Bird before suffering a heart attack. The two events were not linked.

Hughton managed to win one of his seven matches in charge during his second stint, matching the record of complete novice replacement Alan Shearer in one fewer game.

“It has been catastrophic for everybody,” Ashley said in May 2009, seven days after Aston Villa secured Newcastle’s fate. “I’ve lost my money and I’ve made terrible decisions. Now I want to sell it as soon as I can.” Ten years later, the wait goes on.

4) Not so Wise
It is no coincidence that Keegan’s failed managerial return came in the same month as the appointment of Dennis Wise as executive director of football. The former’s opposition to any director of football was well-established by the time the latter arrived with an inexplicably greater sway in the transfer market.

The ingredients were in place, and the recipe for disaster would simmer for months before boiling over. A low-key January 2008 transfer window offered no obvious suggestion of discontent, but the summer arrivals of Jonas Gutierrez, Danny Guthrie, Sebastien Bassong, Fabricio Coloccini and Xisco proved about ten strides too far. That Gutierrez and Coloccini became club stalwarts mattered little to Keegan, who had been completely bypassed in favour of a complete novice dictating moves above him. Wise himself was gone by April 2009 – although his role as an advisor to Ashley was met with understandable derision and anger when revealed by The Times earlier this year.

3) Alan Pardew’s eight-year contract
That Alan Pardew still has one year left of the long-term Newcastle contract he signed in September 2012 is one of many damning indictments of Ashley’s rule.

“If you look at clubs like Manchester United and Arsenal, Sir Alex Ferguson and Arsene Wenger have shown that stability gives you the best platform to achieve success and that is the model we wish to emulate here,” managing director Derek Llambezee said at the time, comparing two of the game’s greatest ever managers with some Scottish fella who used to rock up at Old Trafford every now and then.

To reward Pardew for a fifth-place finish was hardly peculiar, but Newcastle’s slump to 16th the following season made a mockery of their focus on “stability”. Pardew was gone by December 2014 with about three-quarters of his contract remaining.

2) The dodgy Kebab
Though his first stint at St James’ Park was controversial, nothing could prepare anyone for Kinnear’s triumphant return as director of football in June 2013. In a talkSPORT interview the 66-year-old stated that he was replacing Derek Llambezee (Llambias) before defending his previous record as Newcastle manager, claiming “when I had my heart attack we were flying… we were 12th” (they were 15th and without a win in six games).

Like the Apprentice contestant anticipating a grilling from Claude Littner, Kinnear embarked on a charm offensive devoid of the all-important first half, reeling off a list of fictitious CV achievements. He fondly remembered signing Dean Holdsworth for £50,000 (£650,000) and selling Robbie Earle “for x, y, z” (he retired a year after Kinnear left) at Wimbledon. He crowed about never having been sacked (except by Luton in 2003). He revelled in his (Graeme Souness’) purchase of Tim Krul. He proudly recalled having made 400 (258) appearances for Tottenham. He spoke up the talents of Hatem Ben Afri, Yohan Kebab, Shola Amamobi, Jonas Galteirez and Papiss Sissy, stating that he was the man to improve on an already well-rounded squad.

Kinnear was gone by February 2014, Newcastle having made a single permanent signing – that of Olivier Kemen, who left in 2015 without making a single appearance – in his two transfer windows. A grand total of £350,000 of the proceeds of Kebab’s £20m sale to PSG were reinvested into a squad that finished an uninspiring 10th.

1) Letting Rafa go
Aside from the laughable link to Jose Mourinho, who will absolutely take a job with such transfer window limitations, the list of favourites to become the next Newcastle manager exposes the folly of allowing Rafael Benitez’s contract to expire. Garry Monk, Mikel Arteta, Slavisa Jokanovic, Chris Hughton, Jose Gomes, Jurgen Klinsmann, Eddie Howe and Sean Dyche are next in terms of the bookmakers’ odds, and have won a combined 156 Premier League games to Benitez’s 168. The Spaniard has won more Champions League trophies than that octet have managed Champions League knockout games.

He will forever be the one Newcastle allowed to get away, the glorious rebound to Steve McClaren that was cherished by players and fans alike, but taken for granted by those in charge. Benitez takes with him ambition, respect, drive and class, characteristics without which the Magpies could well sink again. It might be one of the biggest, most damaging mistakes in Premier League history, never mind just that of Ashley or Newcastle.