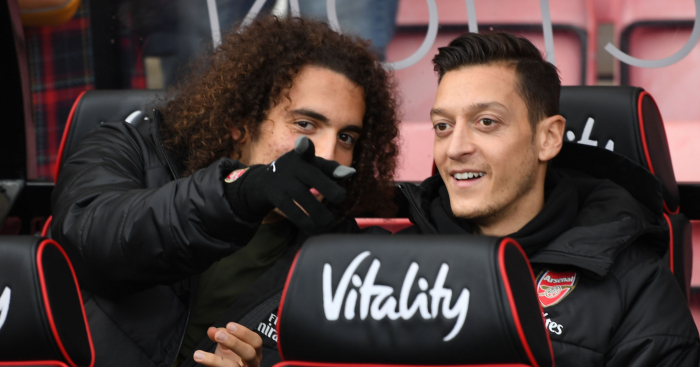 After naming the top ten Premier League players outside the Big Five, it’s time to look at those disappointing in the upper echelons of the table. They have not been terrible, but they have been among the worst of an otherwise excellent bunch. Players must have started at least half their club’s league games so far to be considered. Let’s do this…

10) Henrikh Mkhitaryan
Arsenal made the best of a bad situation of their own creation in January. They faced the prospect of either selling their most prized possession for a knockdown fee, or losing it for free in a matter of months. Having rejected a £60m offer for Alexis Sanchez the previous summer, they would surely have to spend similar money to replace him.

Their solution was simple: they would take a player seemingly tailor-made for their style and swap him with the more individualistic Sanchez. Henrikh Mkhitaryan was not as good as the Chilean, but he was a more natural fit.

As the anniversary of that deal beckons, none of the parties involved can claim to be fully satisfied. Arsenal will not rue their gamble quite as much as Manchester United, but they have hardly emerged smelling of roses. Mkhitaryan’s movement has been important at times, but he has scored or assisted just six of the club’s last 55 Premier League goals; he is by far the most blunt weapon in an otherwise impressive attacking Arsenal.

9) Roberto Firmino
Jurgen Klopp’s celebration was the cause for a collective loss of faecal matter, but the figure of the man racing down the touchline after Divock Origi’s goal was more noteworthy. Roberto Firmino looked like the most relieved man on Merseyside.

The Brazilian was once again aimless for Liverpool on Sunday. Origi did in 11 minutes what Firmino could not in 84 and made a negligible difference, however fortunate the goal. He has now failed to score or assist a goal in 12 of his 20 appearances this season.

It has not been for the want of trying. Firmino’s effort remains as effervescent as ever, but he is lacking oomph. Considering the similarly off-colour Mohamed Salah is his only teammate to have played more Premier League minutes since the start of last season (4,115 to 3,871), perhaps that is no surprise. But at least the Egyptian is approaching something close to form in front of goal. There is a greater demand on Firmino, and therefore a greater need to recuperate.

A change of position has done him no good. Klopp’s reasoning for the tweak is sound with regards to the team as a whole, but it has turned the Premier League’s most unique weapon into an ordinary, ineffective cog in a functional  – and otherwise fantastic – machine.

8) Mateo Kovacic
Maurizio Sarri seems to have differing standards for his midfielders at Chelsea. Jorginho is on an unreachable pedestal, while Ross Barkley is a more than willing clean slate, a lump of clay free to mould however the manager sees fit. The less impressionable Cesc Fabregas is unlikely to ever hold a regular starting place, and as talented as Ruben Loftus-Cheek is, he remains on the periphery. Danny Drinkwater is lurking somewhere around Craven Cottage, craving some much-needed attention from Claudio Ranieri.

Even with his two Premier League titles in three seasons, N’Golo Kante has been the main subject of Sarri’s ire. The Frenchman is rather less malleable than his younger teammates, as only the absolute best player in the world in his role should be. Yet Sarri continues in his attempts to normalise brilliance. “He needs, I think, to improve a little more from the point of view,” he said of a weekend performance that included a fine assist against Fulham. Kante’s is a bar that seems to have been set higher than anyone else’s.

Mateo Kovacic has been allowed to hide in plain sight as his teammate faces the spotlight. He was signed by Sarri instead of inherited, and has benefited from considerably less scrutiny despite considerably more indifferent displays. Six players have had more shots, six have created more chances, four have made more tackles, nine have made more interceptions, and many have had a much greater impact. He is not good enough in defence to negate his ineffective attacking, nor is he good enough going forward to offset his average defensive output.

7) Hugo Lloris
Arsenal signed Bernd Leno. Chelsea made Kepa the most expensive goalkeeper in the world, dethroning Liverpool’s Alisson after less than a month. Ederson helped redefine the position at Manchester City, and even Everton have got in on the act recently. In this game of find a keeper, the losers are the sleepers.

Tottenham could point to Manchester United having not signed a first-team goalkeeper in seven years, but to do so would be folly. David de Gea is one of the absolute best around, a player whose quality would be almost impossible to replace. Which leaves Mauricio Pochettino as the only manager at the top table who could be accused of neither trying to upgrade nor challenge his current option.

Hugo Lloris had earned an unabated reign at the top of the Tottenham pile, but has let his standards drop recently. He has kept as many Premier League clean sheets as Martin Dubravka and Alex McCarthy this season, and is conceding at a rate of one goal every 90 minutes. When the margins at the top are so fine, you have to wonder whether it would be worth investing in an alternative.

6) Mesut Ozil
The Leicester match was the beautiful exception to a worrying new rule. Mesut Ozil has suffered more back spasms this season (427) than he has scored goals, provided assists and generally proven why he deserves such a suffocatingly high wage.

Three goals and one assist in the Premier League’s second highest-scoring side is not a fair return on that investment. But most startling is that Arsenal already seem to have moved on without the German. They won 22 of the 44 Premier League games he did not start under Arsene Wenger; they have won all four he has missed for Unai Emery

One man’s treasure is another man’s trash. Or, rather, one manager’s indulgent luxury will no longer be pampered to such a degree. Emery has made Arsenal stronger by removing their dependence on any one player. Ozil has been the biggest victim.

5) Marcos Alonso
It might be one of the biggest mysteries in the Premier League’s modern day. Chelsea are third, riding the coat-tails of two of the strongest sides in recent memory, despite starting a centre-half who can’t defend, a left-back who rarely wants to, and two strikers allergic to goals.

As troublesome as David Luiz can be and as problematic as Olivier Giroud and Alvaro Morata’s respective struggles in front of goal have been, Marcos Alonso manages to evade wider scrutiny. Outside of Stamford Bridge, few are questioning his place in this side.

Alonso was integral to Chelsea’s 2016/17 Premier League title win, but he was simply the right man in the right place at the right time. He was the only possible peg that could be pushed into the round hole in Antonio Conte’s defence, and did help offer more balance. But that is no longer a word that can be associated with the 27-year-old. Only Morata (30) and Eden Hazard (36) have had more than his 23 shots in the league for Chelsea, and of his 52 attempted crosses this season, only four have been accurate. That is an astonishingly bad record.

When a left-back’s main strength is attacking, there is a slight problem. It is when that strength becomes another one of his weaknesses that it can no longer be ignored.

4) Eric Dier
It was weird when he was said to be better than Lucas Torreira; it was downright ridiculous when we were told he was “no better or worse” than Sergio Busquets. The more Eric Dier’s supporters push, the harder his detractors push back – and they do so with a greater body of evidence.

As ever, there should be a middle ground. Dier is not football’s greatest example of nominative determinism, as many suggest, neither is he good enough to feature as regularly as he does for a team with genuine trophy aspirations. He would not start in any position in a full-strength Tottenham side, but should still play an important part under Mauricio Pochettino.

However, this season has offered ammunition to those who constantly try and shoot him down. Moussa Sissoko has outperformed the 24-year-old in the same position, while Harry Winks is a far more potent option. Dier is in danger of being left behind, and his recent performances have done nothing to support his argument.

It speaks volumes that Jurgen Klopp’s move to a more ‘mature’ approach has seen his youngest player’s iron grip on a starting place loosen somewhat. The 20-year-old started all but four Premier and Champions League games from February onwards last season, with the matches he missed coming immediately before crucial games in the other competition. That has not been the excuse for his three absences this season, while he was substituted at half-time of the 2-0 defeat against Red Star for a reason.

As clubs have started to target Alexander-Arnold, there have invariably been one of two outcomes. He rose to the challenge of Leroy Sane in the Champions League last season, yet has looked far more vulnerable as Liverpool have placed more emphasis on defending and less on controlled chaos. He has the potential to be brilliant, but must navigate this difficult learning curve.

2) Kieran Trippier
If Juan Foyth’s north London derby struggles were at least in part due to the ineptitude of his more experienced teammates, it is a situation he ought to be familiar with by now. The Argentinean conceded two penalties on his Premier League debut against Wolves, the fall guy for Trippier’s failings.

Mauricio Pochettino took note. “Kieran needs to improve in the defensive situation because in the last few games you have seen that we conceded a few actions. The disappointment is massive to concede two cheap actions like we conceded.”

Trippier has misplaced more passes (145) than any other Tottenham player this season. A player who enjoyed much more freedom as a wing-back for England this summer has struggled to shoulder the defensive burden of returning to a back four.

1) Alvaro Morata
Chelsea have, in more ways than one, found Gary Lineker’s antithesis. Alvaro Morata’s haphazard finishing ability was again on show against Fulham, as was his main strength: being booked. He now has as many yellow cards as he does goals in the Premier League in 2018 – six each.

Morata is quite unfathomably Chelsea’s second-top scorer this season, but that actually supports the prosecution as opposed to the defence. A £58m striker should be the primary goal threat in this Chelsea side, the beneficiary of the brilliance of Eden Hazard, Willian, Pedro and a fine supporting cast. Yet the Blues play better without him, Olivier Giroud at least making up for his own lack of goals by facilitating his teammates. Morata, if anything, holds them back.