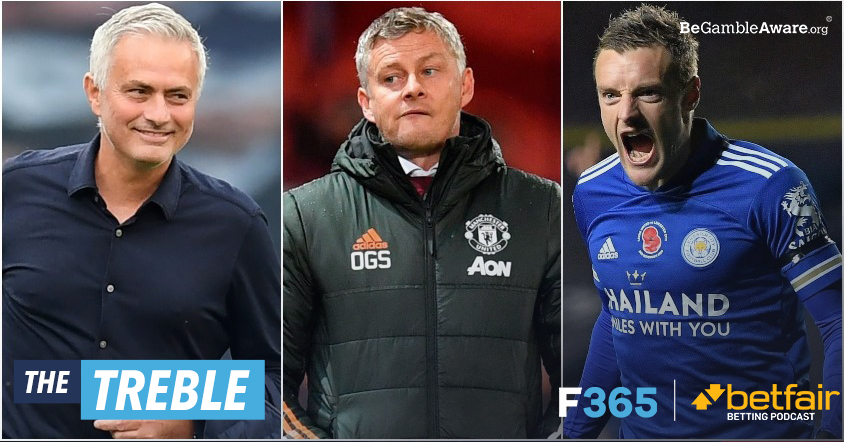 Every week we preview three fascinating things to look out for in the big Premier League games, with further analysis from Betfair’s Football…Only Bettor podcast. And we’re back from the international break with a bang. Liverpool v Leicester could be a classic.

Is the balance of power in Mourinho-v-Guardiola about to shift?

One of the greatest rivalries of the 21st century has fallen flat over the last few years as Jose Mourinho’s tactics lost their relevance, but he is enjoying a mini-resurgence this season thanks to the unique challenges posed by the pandemic.

All of a sudden his conservatism and risk-averse defensive structure seems well-suited to controlling the chaos of Covid football, while the high pressing and high defensive lines that have dominated the last few years look too demanding for the congested fixture list. Mourinho is on the rise as Pep Guardiola, overseeing some alarmingly passive Man City performances this season, falls, and so Saturday’s game could be a symbolic moment in this unexpected shift of power.

It would be an incredible twist in the Mourinho-Guardiola rivalry, signalling a tactical regression in the Premier League just at the point when it looked as though the Catalan had won the argument.

Certainly the hosts appear to hold the upper hand. City are struggling to create clear-cut chances, largely because opponents have increasingly discovered that sitting off the centre-backs in a patient mid-block, cutting off the passing lanes through midfield, significantly weakens Guardiola’s side. That’s the defensive set-up Mourinho has installed successfully this season, and we can anticipate Spurs’ front three blocking the route through to Kevin de Bruyne.

At the other end, the Harry Kane and Son Heung-Min partnership should do damage against City’s high line, with Kyle Walker regularly caught out on the break in 2020/21. There is a clear template for Mourinho’s team to follow, and with the form guide also in Tottenham’s favour this could be one of the most significant matches of the Premier League season – ending a title challenge for one, and launching it for the other.

From Betfair’s Football…Only Bettor podcast: “City’s price of 1.87 reflects their potential, how good they can be, based on what we’ve seen in recent years. But we can attack that price. Spurs have produced some really good performances. How will Jose Mourinho approach this? I think he might be pragmatic and play on the counter-attack. The bet is Spurs double chance and under 4.5 goals at around even odds.”

Surprisingly tricky game for Solskjaer ahead of huge month

As usual, Manchester United found a big win just in time to save Ole Gunnar Solskjaer, but as predicted in this column a fortnight ago, their victory over Everton didn’t teach us anything new about their chances of a top-four finish this season. Solskjaer’s counter-attacking tactics are effective against stronger opposition. It’s facing the smaller clubs that causes United problems.

That’s why Saturday’s game is deceptively tricky for the hosts, who welcome a defensive West Brom side willing to sit right back, defend in numbers, and limit the space for United’s attackers to create chances. The Baggies’ 1-0 defeat to Tottenham in their last match showed their determination and defensive spirit, and given Bruno Fernandes and Paul Pogba are in such poor form, it is easy to imagine United similarly toiling against Slaven Bilic’s side.

Bilic can also rely upon quick forwards to hit with the sucker punch on the break. Matheus Pereira, who missed the Spurs game with coronavirus, and Grady Diangana, dropped to the bench in north London, should return to the starting line-up. These two can wreak havoc, as they did in the 3-3 draw with Chelsea in September.

On paper, this is a very easy game for Man Utd. They simply have to win, or else face a devilish run of fixtures leading up to Christmas in near-enough relegation form. Solskjaer’s team will probably have enough to overcome the league’s third-bottom club. But it will be tight.

From Betfair’s Football…Only Bettor podcast: “If United were to lose this would be a big game for Ole Gunnar Solskjaer. West Brom are setting a record for being the worst Premier League teams for expected goals. United to win to nil at 2.1 looks a decent price.”

Successive clubs have failed to take advantage of Virgil van Dijk’s absence from the Liverpool starting line-up, but Brendan Rodgers’s Leicester City might just be the perfect team to exploit a weakness in this area. Unfortunately for Jurgen Klopp, he is also without Trent Alexander-Arnold and Joe Gomez after a disastrous international break for the champions.

Jamie Vardy will be licking his lips. The basic idea at Leicester is to turn prosaic possession into sudden, explosive bursts of vertical energy, with the ball travelling through the opposition lines in just two or three passes. This usually happens via Youri Tielemans and James Maddison, both of whom receive the ball on the half-turn and look for runners. It was this ability to quickly switch between tempos that caught Man City cold in their 5-2 win earlier in the season, as Harvey Barnes dropped between the lines to feed Vardy in behind.

A similar situation seems probable against a depleted Liverpool back line, particularly given Klopp leaves large gaps on either side of the centre-backs during sustained periods of possession. Barnes can get on the ball behind the right-back, while Vardy’s runs ought to challenge Joel Matip and whoever partners him. With the hosts vulnerable and Rodgers keen to build momentum, Leicester will be happy to counter-attack quickly, stretching the pitch and giving us another hugely entertaining Premier League contest.

That could ultimately favour Liverpool, of course. Leicester are a bit shaky at the back themselves and may struggle to cope with Liverpool’s front three without Wilfried Ndidi, Caglar Soyuncu and Wesley Fofana (who is a doubt).  Two makeshift defences against two superb sets of attackers points to the game of the weekend.

From Betfair’s Football…Only Bettor podcast: “The market has been fascinating since the Liverpool absentees were announced. In Mo Salah, Trent Alexander-Arnold and others they’re missing influential players in both boxes. But it’s almost two years since Liverpool were even money – as they are for this – at home against anyone other than Man City. There’s been a massive overreaction and Leicester are overrated. They’re missing players too. Even money for Liverpool is a fantastic bet.”