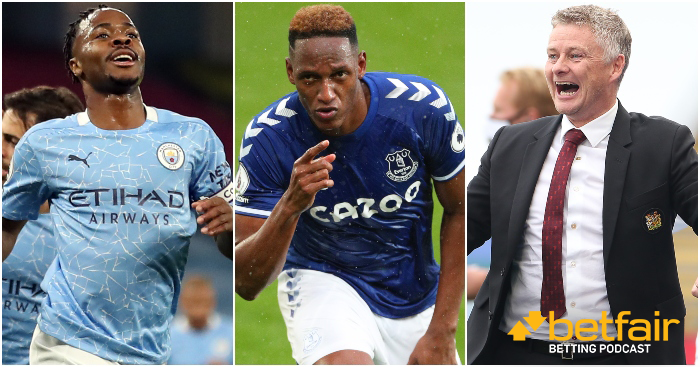 Every week we preview three fascinating things to look out for in the big Premier League games, with further analysis from Betfair’s Football…Only Bettor podcast. Man Utd v Chelsea (or Solskjaer v Lampard) is unquestionably the one to watch this weekend.

There is something about this fixture that always seems to create a story, a mini-turning point for either Ole Gunnar Solskjaer or Frank Lampard, two curiously similar managers eternally hovering between the dawn of a new era and total collapse. Both were given the job because of their association as former players, rather than their qualifications. Both are tactically naïve and seemingly unable to improve. Both have the spectre of Mauricio Pochettino hanging over them.

Perhaps it makes sense, then, that their head-to-heads should always seem so portentous. Chelsea’s 4-0 defeat to Manchester United in Lampard’s first Premier League game brutally exposed the systemic flaw he is yet to fix, namely a hopeless porousness in the transition. Solskjaer’s 2-0 win in the league in February began their surge towards the Champions League spots and plunged Lampard’s debut campaign into doubt. Chelsea’s 3-1 FA Cup semi-final victory in July felt important at the time as Lampard switched to a back three and a more conservative approach, masterminding a well-deserved win to flip the narrative back in his favour.

Saturday’s game could top them all.

It’s only because the Premier League is so plot-heavy right now – Everton’s form, Virgil van Dijk’s injury, Manchester City’s wobble – that neither Chelsea nor Man Utd are receiving more attention for their poor starts to the season. Lampard and Solskjaer, having collected 14 points from the first nine games between them, are very lucky to have avoided greater scrutiny.

That won’t last much longer. Sooner or later the allure of discussing a full-blown crisis will be too great for the media to ignore. Dropping points in this game will surely take either, or both, close to that point.

Judging on recent form, Lampard is the more likely of the two managers to be feeling the heat by Saturday evening. Chelsea continue to ship goals like a side that simply doesn’t receive adequate defensive coaching, playing under such a vague notion of a high line and a high press they’re in constant chaos.

Chelsea stretch out far and wide in search of goals, inevitably getting punished on the break. Who better to exploit them than Solskjaer’s United, themselves only looking coherent, assertive or purposeful when allowed to sit back in easy-to-understand rows of four. They will pounce on the counter-attack and should – like Southampton and West Brom – burst through the Chelsea defence.

From Betfair’s Football…Only Bettor podcast: “At the prices if I had to back anyone I’d rather back Chelsea. But for a same-game multibet I’d give you both teams to score, Bruno Fernandes to score, Jorginho to be booked. As it’s United, I’d also back a penalty to be awarded.

We don’t tend to imagine someone as successful as Pep Guardiola could suffer a dip in confidence, could ever start doubting his ability. But we know he is an anxious coach, a man who frantically paces the touchline, unable to eat anything on match days. So it is natural to assume he shares some of the concerns about Man City’s medium-term future, and perhaps even stays awake at night wondering if that ‘over-thinker’ line holds water.

And so the 1-0 win over Arsenal will have been as important, psychologically, to Guardiola as it was to his players. A tactical win with a Guardiola-esque surprise is just what he and the club needed to re-stabilise and, after Liverpool dropped points and lost Virgil van Dijk, to make City title favourites.

Then again, arguably the bigger challenge for Man City is whether they can re-impose the mental stranglehold they used to have over opponents; can once again instil the fear that allowed them to hold 70% possession and neuter a counter-attacking threat without actually needing to defend in numbers.

Weirdly enough, West Ham under David Moyes are now just the sort of side who have done Man City considerable damage over the last year. The 2017-2019 version of Man City would suffocate the middle class, but in 2020 opponents are emboldened to break with gusto.

The way Tottenham raced into a three-goal lead against West Ham last weekend, and the way Everton dispatched of them 4-1, suggests Man City will get a comfortable win. It might not actually be all that hard, and yet it will feel like a significant moment. In this bizarre and uncontrollable campaign that feeling is priceless. An emphatic win will be soothing – and will put Guardiola back on top.

Everton’s weak points to be uncovered by Southampton

It’s been a fantastic start, but it can’t last forever. Eventually someone is going to work out where Everton are vulnerable, if they haven’t already. Against Liverpool last weekend it became clear Carlo Ancelotti’s team can be got at down their left side, where Richarlison commits too far forward to help defensively, while Jordan Pickford and Yerry Mina both reminded us of their error-prone tendencies.

This gives Ralph Hasenhuttl something to work with. Richarlison is suspended for this one, but his replacement Alex Iwobi will likely operate in a similarly attacking role. That could provide space for Stuart Armstrong – who should deputise for the ineligible Theo Walcott – to attack Lucas Digne on that flank. Meanwhile Danny Ings, supported superbly by Che Adams, can put Mina and Pickford under a lot of pressure.

Hasenhuttl is an intelligent, reactive manager who will work on pressing traps to unsettle Everton in their weakest areas. If anyone is going to find out how to knock Ancelotti’s side off their perch, it’s him.

From Betfair’s Football…Only Bettor podcast: “Both teams have issues at the back so goals are the way to play in this one. Over 2.5 goals at around 1.8 and both teams to score.”

THE TREBLE: Back Man Utd to beat Chelsea, Man City to beat West Ham with a -2 handicap, and Everton and Southampton to draw at 29.99/1