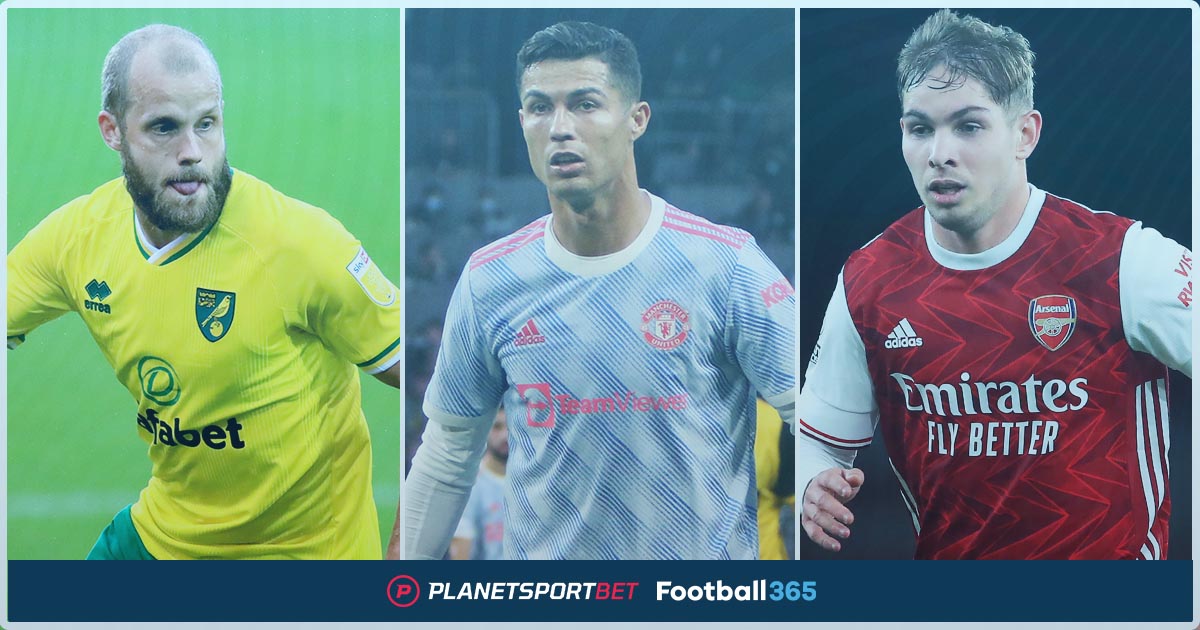 We’re back for another weekend of Premier League action where Arsenal take on Burnley, Norwich host Watford and Man United travel to West Ham.

Arteta’s new system provides a smidgen of optimism
Five new signings started the game against Norwich. Ben White and Gabriel kept a clean sheet as Arsenal’s new centre-back partnership. Mikel Arteta changed to a 4-3-3 – the system he has always wanted to play, but hasn’t had the personnel for – on the 60-minute mark and it worked. It might seem silly to talk optimistically about a ‘Big Six’ club climbing off the bottom of the table with a squeaky 1-0 against Norwich City, but the green shoots are there. Honest.

We went over this last week in detail, but in short Arteta’s new signings all fit the tactical aesthetic he is trying to impart: dextrous short-passing football, hyper-disciplined positioning, a high press, and quick vertical football through the lines. He is very similar to Pep Guardiola, it’s just we haven’t seen it yet because his players have not been good enough to enact such a complex system. Maybe, just maybe, we will start to see things come together over the next few weeks.

Burnley are ideal opponents. Sean Dyche has always had a poor record against the big teams, mainly because his 4-4-2 is too aggressive in the tackle, leading to big gaps opening through that two-man midfield. The basic idea of Arteta’s new 4-3-3 is to have two number eights floating around as playmakers (like at Man City), so if Emile Smith Rowe and Martin Odegaard start together in the middle Burnley should be blown away.

In fact, that’s exactly what happened to Burnley on Monday night – when Rafael Benitez switched to a 4-3-3 and Dyche’s side fell apart, conceding twice from quick breaks through the middle as Abdoulaye Doucoure and Allan powered forward. Burnley only have one point from their first four games of the season. They will be even more accommodating to Arsenal than Norwich were.

Farke already has a must-win game after Deja Vu start
Norwich City were supposed to be more streetwise this season, strengthened by the arrival of Billy Gilmour, Ozan Kabak, Milot Rashica and Ben Gibson. But instead they look exactly the same team as 2019/20: hopelessly naive in their pursuit of pretty attacking football and prone to basic defensive errors. Daniel Farke’s side just don’t look good enough in any area of the pitch.

His team are currently on zero points from four games with ten goals conceded and only one scored. It goes without saying that Watford at home is a must-win game, because if Norwich were to lose what is – on paper – the easiest game of the season, heads will surely drop.

Worryingly, they lost 1-0 to Watford home and away in the Championship last season and Xisco’s side are playing with a lot more nous and fire so far this year – albeit largely just at Vicarage Road.

Neither team will want to lose this game, the hosts desperate for a point on the board and the visitors keen not to go too long without a point away from home. As such, it’s likely the game will drift towards a draw.

An important test of Ronaldo’s influence after Young boys defeat
A week ago we were pondering whether Cristiano Ronaldo’s goals can win the ‘moments’ for Ole Gunnar Solskjaer at Manchester United, making up for the poor ball progression through midfield and their vulnerability to counter-attacks, or whether the flaws are too great for Ronaldo to close the gap to Manchester City. It is a question that will take a long time to answer but, kindly enough, United have presented the case for and against in the space of just four days.

They (probably) needed Ronaldo to twice take the game by the scruff of the neck against Newcastle in an otherwise worryingly familiar showing of sideways passing and leaky defending. Then on Tuesday night his opener against Young Boys wasn’t enough to paper over the cracks, and as he flounced and threw himself to the ground in the latter stages we saw, with perfect clarity, the other side of the argument… as worryingly familiar sideways passing and leaky defending led to a damaging defeat.

It’s going to be an entertaining year, at least. We’re only five games into the season and every single one has been fascinating in its own way, which is perhaps always going to be the case for a grandiose club aching for a return to glory, stacked with world-class (if a little egotistical) stars, and managed by someone not quite good enough to make them better than the sum of their parts.

But with so many unknowns surrounding Man Utd’s season there’s a basic entertainment certainty about them: an easy win, a hard-fought win, a draw, or a defeat are all equally compelling; equally important learning opportunities. Sunday’s trip to the London Stadium is, therefore, unmissable.

West Ham will be confident of success. The London Stadium has started to feel like a home and even without Michail Antonio – suspended for this one after receiving two yellow cards at Southampton – David Moyes will be confident that his solid, conservative defensive setup is exactly the kind of system that frustrates Solskjaer’s side. Like Southampton in the 1-1 draw and Wolves in a ludicrously unlucky 1-0 defeat, West Ham will sit back a bit and frustrate Man Utd, waiting for counter-attacking chances.

And they will come. At the risk of sounding like a broken record, Solskjaer does not coach ball progression through the lines. They are a team of individualists without the structure to know how to break down a compact opposition, which is why so often their football slows down and their passes are shuffled pointlessly out to the wings. Granted, there is an aerial threat with Ronaldo, but West Ham are very good at preventing balls going into the box in the first place.

Plus they are simply more powerful and coherent through midfield, and likely to win a lot of the 50-50s as Moyes’s confrontational style goes up a notch for a big game in front of a sell-out crowd. West Ham will be up for this, and with Jarrod Bowen leading the line won’t necessarily lose their potential for fast breaks. The Young Boys defeat is a huge blow psychologically. West Ham can twist the knife.