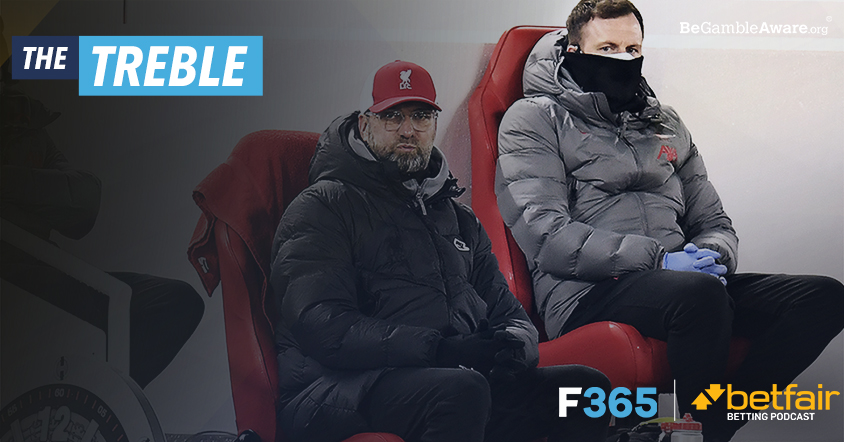 Every week we preview three fascinating things to look out for in the big Premier League games (with Spurs v Liverpool the highlight on Thursday) in association with Betfair’s Football…Only Bettor podcast.

What will post-Lampard Chelsea look like?
Thomas Tuchel was announced as the new Chelsea manager on Tuesday and he will be in the dugout for the match against Wolves on Wednesday. There will have been no time to impart any ideas, making this game a free hit for players keen to impress the new boss. Following a mildly poisonous final few weeks under Frank Lampard, if the Tuchel reports are to be believed, a small, new-manager bounce is to be expected.

Timo Werner and Kai Havertz are the most obvious beneficiaries of a manager change, and for that reason alone both are likely to start. But there are no obvious changes to the starting line-up that can be made to refresh things, and for all Lampard’s faults – most of them tactical – the new manager faces the same problem as his predecessor: a top-heavy team with too many attacking stars to cram in.

At their best, Lampard’s Chelsea enjoyed their total creative freedom, roaming in whatever pattern they pleased and – in the process – overwhelming the opposition with their scurrying movement. The confidence brought on by Tuchel’s arrival might see a return to that version of Chelsea, which should be enough to overcome a Wolves side stuck in the mud.

Nuno Espirito Santo is playing an ill-fitting 4-2-3-1 at the moment and the back four are making numerous mistakes. Chelsea, pressing high and hard, charging around in an attempt to impress Tuchel, should have enough to force errors and condemn Wolves to yet another defeat.

Crucial six-pointer could open an exciting relegation battle
Neutrals need to hope for a Fulham win on Wednesday. That would lift Scott Parker’s team to within two points of 17th-placed Brighton, with a game in hand, and in the process yank Newcastle United and Burnley into the relegation battle. For a while it has looked as though the current bottom three were too far adrift to give us an exciting race against the drop this year, yet if Fulham can crown their improved form with three points then all of a sudden, 18th spot is wide open.

The visitors should be favourites. Parker’s 3-4-3 is increasingly solid defensively and assertive on the break, while Graham Potter’s Brighton don’t create many chances and are very porous defensively. Few teams are as vulnerable to quick counter-attacks, so if Ademola Lookman and Ivan Cavaleiro are on form Fulham can steal the three points.

That drags multiple teams into the fight. Newcastle are in free-fall, looking utterly hopeless yet again in defeat to Aston Villa. Steve Bruce desperately needs Brighton to win this one. Burnley’s recent improvements probably mean they will be safe, but then again if Fulham can get within touching distance of the mid-tier clubs then who knows what could happen higher up the table. Maybe the bottom will fall out towards the end of this exhausting season for Crystal Palace, Leeds United or Wolves?

All three look safe now, but with things changing so wildly at the top end there is no reason to assume the patterns are set at the bottom.

Back Fulham to beat Brighton at 11/4 (Betfair)

Spurs win could have huge ramifications for both clubs
In an ordinary season Tottenham’s infuriating inability to hold onto a lead would have ended their faint hopes of a title challenge. But in this bizarre and confounding Premier League campaign, Jose Mourinho’s side, just four points off leaders Manchester United if they win their game in hand, remain in the hunt.

If it seems a little far-fetched to assume Spurs will recover from such an underwhelming first half of the campaign to win the crown, then ask yourself this: is it really any more unlikely than what has happened to Liverpool over the last month? If, in the space of just four weeks, Jurgen Klopp’s team can go from pulling-away-from-the-chasing-pack-with-a-7-0-win-at-Crystal-Palace brilliant to struggling-to-scrape-top-four-after-a-five-game-winless-run bad, then Tottenham definitely have time to flip the narrative again.

A statement win against Liverpool would do the trick, lifting them above the current champions and extending their undefeated run to five games. From here, Mourinho’s messaging to his players is relatively simple: cut out those hesitant final 15 minutes of matches and Spurs are in this race.

And there is a good chance Spurs will get the win on Thursday. Roberto Firmino and Mohamed Salah looked sharper than they have been in the FA Cup defeat to Manchester United, but this is likely to mean Liverpool are particularly territorially dominant, pinning Spurs into a position that actually favours their counter-attacking threat. It might sound strange, but Liverpool stand a better chance in London if the game is relatively even, so a stronger showing from Firmino will potentially lure Liverpool forward – leaving them open to the Kane-Son partnership.

A Tottenham win would be just as significant for Liverpool. Another game without a win, or another game without a goal, would break yet more unwanted records. It could also conceivably leave them seventh in the table and just two points above Aston Villa, who have two games in hand. Among their next six after Thursday, Klopp’s side play Manchester City, Leicester City, RB Leipzig and Everton.

This is make-or-break time. The pressure has been well and truly cranked up, and when you’re feeling the heat the very last manager you want to come up against is Jose Mourinho. This could be a feisty, febrile game. Spurs will welcome that.

Back Spurs to beat Liverpool at 21/10 (Betfair)