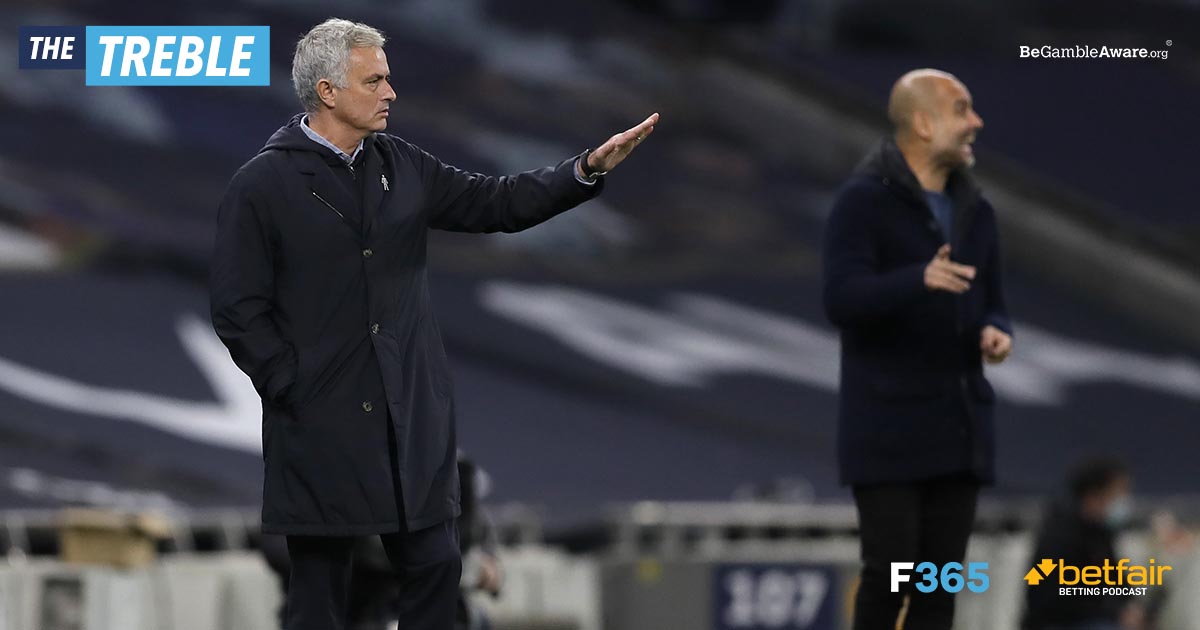 Guardiola v Mourinho sideshow highlights how far Jose has fallen
There was a time when every meeting between Pep Guardiola and Jose Mourinho was hyped like a boxing match, two stern floating heads eyeing each other up on advertising billboards that captured one of sport’s most iconic rivalries.

Here were two managers whose philosophies didn’t just clash but were written in deliberate opposition to one another, a fight for football’s very soul: the idealist versus the pragmatist; Dionysus versus Apollo – the mythologising of their relationship was so accepted, so justified, you could get away with being that pretentious.

But Guardiola won the argument, won the war, and it is striking that their rivalry now seems as deadened as the one between Sir Alex Ferguson and Arsene Wenger towards the end. There was something mildly pathetic about the softening of the Ferguson-Wenger relationship, its cool-off a sign that one man had simply triumphed over the other.

That is where we are in 2021 as Man City host Spurs on Sunday 14 points clear and practically playing a different sport.

Perhaps Guardiola didn’t really win so much as Mourinho lost, those implosions at Chelsea and Manchester United fatally undermining his image, and with that ending his capacity for psychological control over his own team and the opponent. But that doesn’t quite explain why his tactical ideas fell out of favour while Guardiola’s became the default.

It is partly about aesthetics and about the necessity of possession football in an age of wealth and power concentrated in the select few, but more importantly it is about adaptability – a quality emphasised by the difference between the two managers’ respective responses to the pandemic.

Guardiola has worked it out faster than anyone else, and after a difficult first third of the season he has wrestled with the chaos and regained control of the variables. Man City have doubled down on possession, abandoning the high press in favour of obsessive ball retention, effectively turning the pitch into one giant rondo around the centre circle.

From the false 9, to the (very) inverted wingers to the use of right-back Joao Cancelo as a central midfielder, Guardiola has pressed everything together, shutting down transition football and bracing his side against the pandemonium of Covid-19. It is perhaps the best example yet of the Catalan’s genius of adaptability, a trait that allowed him to retain the essence of his tactical beliefs in Germany and England while making huge changes to align with the idiosyncrasies of each country.

Mourinho hasn’t adapted at all, not for about a decade now. The football looks and feels the same as it always did, but as the rest of the industry advances around him Mourinho standing still looks an awful lot like Mourinho moving backwards. The result, inevitably, is a playing style that looks old, slow, covered in cobwebs; as aged and infirm as the Tottenham players now appear.

Saturday’s game promises to be a stark example of that difference between the two managers. Man City’s effortless brilliance over the past couple of months should be far too forceful and intelligent for a stuttering Spurs team that are too reliant on Harry Kane to counter-balance those sloppy defensive mistakes. Football is a game of confidence as much as it is tactics, and when the atmospheres in the two dressing rooms are at opposite ends of the spectrum the result feels like a foregone conclusion.

As for Guardiola versus Mourinho – a story already over and now in its miserable, rambling postscript – the collapse of their rivalry is captured in how both have dealt with the biggest curveball ever to hit the sport. One adapts, the other stagnates. One is flourishing at the top, the other is on a collision course with fans who have seen this one before and know how it all ends.

From Betfair’s Football…Only Bettor podcast: “City have been unbelievably dominant in their last 16 games and Pep Guardiola deserves great credit. Spurs will come to defend and play on the counter-attack. City to win and under 3.5 goals at around evens is the bet.”

Arteta at risk of another downward spiral
No team has embodied the carnage of the 2020/21 season quite like Arsenal, who after a miraculous recovery through January are on the verge of falling back into the doldrums following a three-game winless run. That’s just the binary nature of the news cycle at the moment: it’s either optimism or crisis, a yo-yoing made all the worse for how tight the gap is between European places and mid-table obscurity.

Lose, and Arsenal could go 14th; win, and they might end the weekend three points off the Europa League spots. It is tempting to ignore the hysteria then and refuse any clear narrative about the direction this football club is moving in, but league position and the ensuing stories in the media do have a psychological impact on teams. Mikel Arteta really can’t afford another run of defeats and more tongue-in-cheek discussions of a relegation battle.

But there’s a decent chance Leeds will take points at the Emirates in what should be the sort of open, end-to-end game that Arsenal rarely do well in. They are at their best when measured and in control under Arteta, primarily because their defence is too volatile and error-prone for emotional matches.

Should it descend then Leeds have the advantage, especially on their right where in-form Raphinha (four goals or assists in his last five) will be joined by Luke Ayling and Stuart Dallas to overcrowd Arsenal’s most vulnerable defender Cedric Soares.

From Betfair’s Football…Only Bettor podcast: “Arsenal give away very few chances but they don’t create many either. Leeds are better defensively when they play the better chances.”

A chance to launch a top-four challenge?
Just as Arsenal could get suckered in by premature narratives about mid-table obscurity, Everton might get a major psychological boost from officially entering the top-four race. Carlo Ancelotti’s side would in fact pull three points clear of Liverpool in fourth if they won their games in hand, but pundits aren’t going to take them seriously until the Toffees are actually sat in those spots.

It could happen, more or less, on Sunday night. If Leicester beat Liverpool then Everton will only have to defeat Fulham to move level on points with their rivals, needing just one win from their two games in hand to leapfrog Chelsea and West Ham into fourth.

This is the perfect time to put a run together. Sprint through the remaining weeks of winter and Everton can emerge, with the 10-game countdown started, in the top four and with a clearing schedule as European football returns for the likes of Liverpool and Chelsea. This could be the weekend Ancelotti’s side are taken seriously.