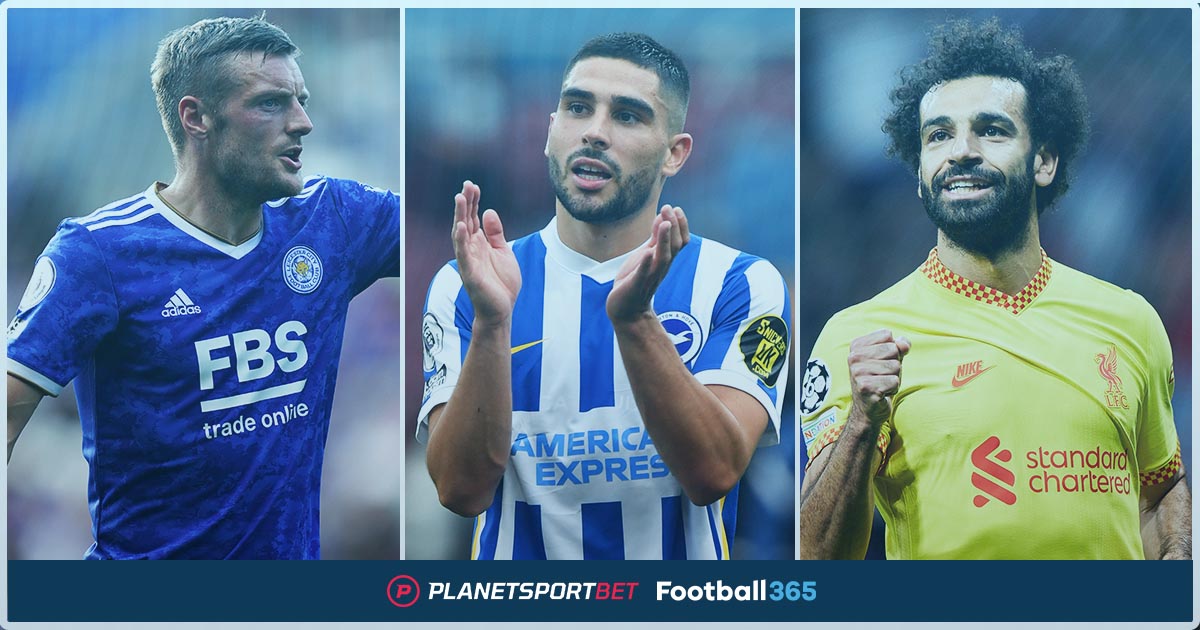 After the midweek Champions League action, our focus returns to the Premier League as Man City travel to Brighton, Brentford host Leicester and Man United clash with Liverpool.

Brighton can leapfrog Man City – if the goals come back
We are at an agonising tight-rope moment in Brighton’s season. Having made such a brilliant start, three consecutive draws threatens to plunge them back down towards mid-table and confirm that their failure to sign a striker will, once again, let them down. A goalless draw against Norwich and a 1-1 draw with Crystal Palace is disappointing, but worse is Neal Maupay’s poor performances in Brighton’s last two.

He missed a brilliant chance in the 86th minute against Norwich, his only shot of the game, and struggled badly against Arsenal, hitting four of his five shots off target. It will no doubt alarm Brighton fans that their season depends on the shooting ability of Maupay, but sadly that’s the truth. And presumably he isn’t going to rediscover a goalscoring touch against Manchester City’s defence.

Brighton’s 3-2 win in May, in which they can back from two goals down against ten-man City, is a freak result and unlikely to have any bearing on this game. Nevertheless Graham Potter’s side will be competitive, suggesting they can steal a point – even if Maupay has regressed back to his mean.

Rodgers must snatch chance to build top-four momentum
Just a week ago it looked as though Brendan Rodgers’ time at Leicester was coming to an end. With Newcastle United rumours swirling, and counter-rumours that suggested he was holding out for the Manchester City job, it was easy to imagine his Leicester project petering out. The emotional toll of missing out on the Champions League two years in a row, plus the high of the FA Cup win in May, suggested this team had little left to fight for.

Everything changed last Saturday as Rodgers finally reinstated the 3-5-2 that had looked so good last season and Leicester, clicking into gear, swept Man Utd aside. James Maddison was improved by being deployed directly behind a strike partnership; Jamie Vardy looked better alongside Kelechi Iheanacho; and the defence was notably more secure in a three. The Leicester manager will surely now continue with the system, providing the platform for a third push for the top four.

Amazingly, they are only four points off the Champions League places with 30 games left to play – and what had looked like a hopeless situation is suddenly filled with optimism again, not least because by comfortably beating Man Utd they proved that there is one spot in the top four up for grabs.

It is vital they build on this momentum on Sunday at Brentford. Thomas Frank’s side are arguably the most entertaining in the division and will no doubt throw Leicester about a bit, as they have done Chelsea and Arsenal at Griffin Park this season. It will not be an easy game, but with Leicester in a 3-5-2 formation that roughly mirrors Brentford’s, plus being back to their sharp and vertical best, the Foxes should avoid being drawn into the chaos.

Back Leicester to win at 13/8 (Planet Sport Bet)

Ronaldo might just plunge Solskjaer into crisis
Ole Gunnar Solskjaer has a habit of getting out of a sticky situation right at the last minute, pulling off a big win in a derby game to swerve any awkward questions from a Manchester United board that seem relieved to able to remain loyal to their manager. This weekend’s visit of Liverpool is the sort of match United would usually win, easing the pressure on Solskjaer and presenting yet another mirage; yet another false dawn; yet another chance for Ed Woodward to cling to the notion he’s hired the next Sir Alex Ferguson.

But perhaps finally the cycle will be broken and United can decisively move out of purgatory – thanks to Cristiano Ronaldo. The reason Man Utd tend to perform better against elite clubs is that it presents them with the rare opportunity to sit back and play improvisational counter-attacking football, which is both the simplest tactical strategy to coach and the easiest way for under-coached players to work out a game on their own. Ronaldo’s presence threatens to dismantle this.

He doesn’t press. In fact he barely moves when United are out of possession, failing to cut off the passing lanes into midfield and therefore making it far too easy for the opponent to walk through the middle of the pitch and create chances. Leicester City’s dominant 4-2 win last weekend was a clear sign that with Ronaldo leading the line Man Utd have lost their ability to keep things tight, which should mean Liverpool get the three points at Old Trafford.

Signing Ronaldo always felt like a mistake, a lunging grab at celebrity that United simply did not need. It is starting to look like the error will define Solskjaer’s tenure; will become the emblem of all the bad decisions Ed Woodward has made since Ferguson’s retirement.

Back Liverpool to win at 5/4 (Planet Sport Bet)

The Treble: Brighton to draw with Man City, Leicester to beat Brentford, Liverpool to beat Man United at over 25/1 (Planet Sport Bet)