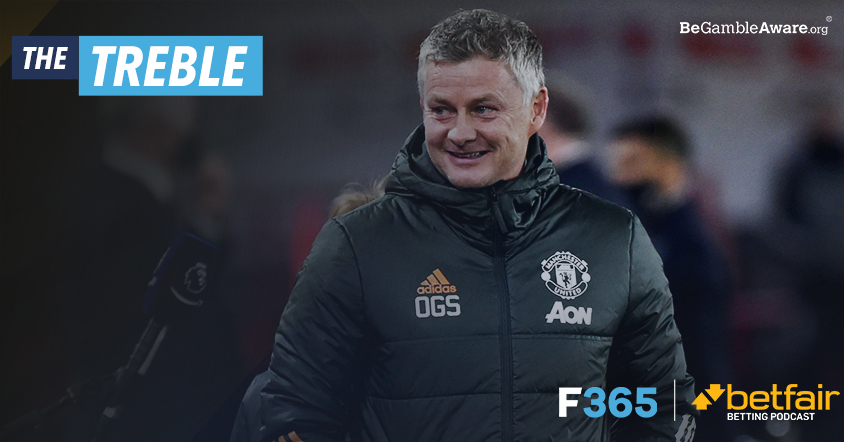 Every week we preview three fascinating things to look out for in the big Premier League games – and not just Liverpool v Man United – in association with Betfair’s Football…Only Bettor podcast.

Betfair Betting Podcast · Football…Only Bettor Episode 59: He’s like a horse without a jockey

Another resilient Fulham performance will turn up the heat on Lampard
There is reason to believe Fulham will take a point off Chelsea, having drawn each of their last five while denying Liverpool and Tottenham in that time. Frank Lampard dropping another two points wouldn’t be the last straw for Roman Abramovich but, analysing the fixture list, it might signal a turning point and thus the beginning of the end for the Chelsea manager.

There is a decent chance West Ham, Arsenal and Leeds will win their respective home games against Burnley, Brighton and Newcastle this weekend. If that happens, and Chelsea draw, then Lampard’s side will drop to tenth and find themselves just one point ahead of Leeds in 12th. It could even leave them nine points off the top four as they go into a midweek clash away at Leicester City.

That’s when things get serious. In the scenario I’ve just imagined, Chelsea travel to an in-form, top-four side on the back of one win in seven – with defeat putting a possible 12-point chasm between them and the Champions League spots. Abramovich has a history of sacking the Chelsea manager as soon as a top-four finish looks out of reach; a 12-point gap, and an eight-game winless run, is presumably that point.

This is all hypothetical for now, and relies on several results going a certain way. But there is good reason to believe Fulham will frustrate Chelsea on Saturday, as Scott Parker’s diligent 5-3-2 denies space for Lampard’s wayward playmakers.

Back Fulham and Chelsea to draw at 17/5 (Betfair)

From Betfair’s Football…Only Bettor podcast: “Lampard needs a result here and I don’t think he’ll get it. Chelsea are too short at 1.52 and I’ll be looking to side with the lay on that.”

Symbolic moment can begin Leicester-like charge to the title
United’s recent surge of good form has left critics wondering whether they have been too harsh on Ole Gunnar Solskjaer and whether perhaps there was a method all along, just one they couldn’t see. But the real explanation for their title challenge is that the Premier League has undergone a significant tactical regression this season thanks to the impact of Covid-19 on fitness and coaching sessions. All of a sudden a vaguely-defined, flawed and emotional team like Solskjaer’s United can excel.

That is why, despite the fact Solskjaer’s side still play without a discernible tactical plan, Sunday’s title clash at Anfield is Man Utd’s most important game since Sir Alex Ferguson’s retirement. It is an opportunity for a manager all about building confidence, togetherness and momentum to seriously build some confidence, togetherness and momentum.

Solskjaer is an excellent man-manager and motivator. After two years of his players consistently playing for him through long spells of poor form there is no doubt about that, and in this most unique of seasons that belief can go a very long way. The problem is (or has been) that United still don’t have much of a plan compared with Liverpool or Manchester City, instead relying on individualism – simply possessing better players than their opponents – to get through the majority of matches.

Maybe that isn’t so important anymore, because if they beat Liverpool at Anfield and move six points clear at the top, United’s players will be brimming with confidence; the attribute that propels them more than any other Premier League club. Solskjaer’s side can win the league this campaign, not with a razor-sharp tactical purpose like each of the last three managers to do so (Jurgen Klopp, Pep Guardiola and Antonio Conte) but like the man who lifted the trophy in 2016: Claudio Ranieri.

One game at a time, with sheer force of will, with sheer momentum, United could do it. It means walking a tight-rope, of course – emotional teams are more prone to collapse than those built on a tactical foundation –  and indeed it is possible the club’s current run of form is just another upswing in the endless yo-yoing under Solskjaer. But if that upswing takes you six points clear at the top at the halfway stage, then the self-belief might just solidify.

The timing is perfect, too. Liverpool, unbeaten at Anfield since April 2017, have gone three league games without win. They look exhausted, physically and mentally, and are in the midst of an injury crisis in defence that should favour United’s forwards. Klopp’s side are there for the taking.

It would be a monumental win; a symbolic power shift that a team built on the mythology of the ‘United Way’ would fully understand.

From Betfair’s Football…Only Bettor podcast: “I’m not one to back the draw often. But it was on my shortlist for this match. I oppose a high-scoring game, under 3.5 goals at 1.78.”

Bruce’s side are slipping into a relegation battle

Mikel Arteta will expect to chalk up another win on Monday night when Newcastle United visit the Emirates. Steve Bruce’s side are a little lost without Allan Saint-Maximin, and having been hit badly by Covid earlier in the season it looks as though Newcastle are generally struggling to recover – and are sleepwalking their way towards a relegation battle.

They have lost five of their last six in all competitions and last recorded a Premier League victory on December 12 against West Brom. Seven points separate them from Fulham in 18th but with the Cottagers possessing a game in hand, and steadily improving under Parker, the threat of relegation looms large.

The situation intensified on Tuesday night when Bruce’s side became the first team this season to lose to Sheffield United in a toothless performance at Bramall Lane. They held 34% possession and had seven shots. Ryan Fraser was sent off. Newcastle are pretty much in free-fall now; a rejuvenated Arsenal ought to win easily.

Betfair Betting Podcast · Football…Only Bettor Episode 59: He’s like a horse without a jockey