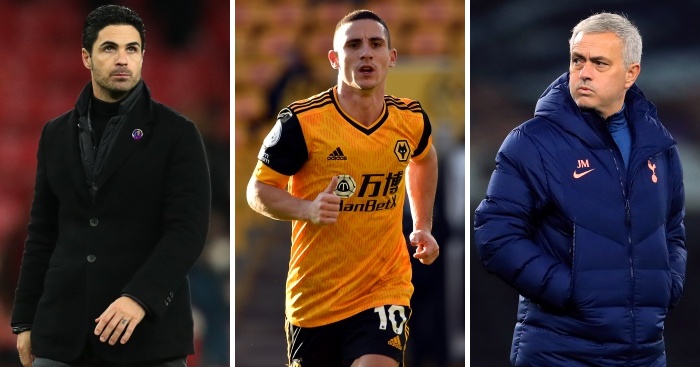 Every week we preview three fascinating things to look out for in the big Premier League games, in association with Betfair’s Football…Only Bettor podcast.

Chelsea face important moment after mini slow-down
Liverpool’s dropped point at Fulham on Sunday, and the ease with which Scott Parker’s side cut through them in the first half, has strengthened the case for Chelsea making a run for the title this year. In fact, it increasingly looks like they are the strongest team in the competition. Frank Lampard probably won’t get a better chance of winning the Premier League.

And so this Christmas period is of growing importance, especially given Chelsea have started to slow down a little bit. They were poor in the 1-0 defeat at Goodison Park, in which Kai Havertz again looked clumsy in possession and Timo Werner went missing for long periods once more. It’s nothing to be alarmed about – these things happen, especially in an exhausting season like this one – but there is a danger that Chelsea could make a habit of it, especially with Hakim Ziyech out for a little while longer.

Wolves away is just the sort of game Chelsea could find themselves sluggishly drawing, and after that comes a potentially wearying clash with West Ham this weekend before games against Arsenal, Aston Villa and Manchester City. It’s a tough winter run, and if the cold set in at Goodison Park on Saturday then Lampard needs his team to thaw and fast.

Nuno Espirito Santo’s side were unlucky to lose to Villa, and aside from a blip at Anfield have been their usual stoic selves this season. As Chelsea’s new signings continue to find their feet, we can expect a low-scoring game at Molineux.

Forced changes could unclog something for Arsenal
Arsenal have fallen into their present crisis at remarkable speed, and a report by Football.London this week suggests severe divisions in the dressing room (some players have mentally clocked out, leaks to the press are rife as team-mates fall out) are to blame for the on-field stagnation.

Mikel Arteta is clearly responsible for a large part of this, even if other senior figures at the club have ensured it is a near-impossible job for the Arsenal manager. From David Luiz reportedly falling out with him, to Arteta ostracising Mesut Ozil and Sokratis, to refusing to play William Saliba, to poor PR like the meme-able talk of crossing and ‘pure maths’, the Arsenal manager’s grand plans are unravelling.

But he is also a victim of how the pandemic has affected the Premier League. The congested fixture list means virtually no time to work on tactics in the week, and considering Arteta’s approach requires fine-tuned positional coaching it is no wonder the team have slumped so badly. Back in June, Arsenal were one of the most disciplined and structured teams – with and without the ball – in the country. Now, without time to work on the system, they are a meandering mess of individuals.

One of the biggest complaints levelled at Arteta is an unwillingness to try new things, to take risks on more creative line-breaking players. Like his mentor, Pep Guardiola, he suffers from an anxious need for control that tends towards picking safe technicians rather than unpredictable creators. He trusts Granit Xhaka but not Dani Ceballos; Willian but not Reiss Nelson.

His hand might be forced on Wednesday, when more of his Europa League team will probably be picked to keep things fresh for Saturday’s game at Everton. The Europa League players won six out of six in the group stage, and yet rarely have performances in the UEFA competition led to more game time in the Premier League.

Take the 4-1 win over Rapid Wien. Alexandre Lacazette did keep his spot as a withdrawn striker, with mixed results (if we’re being kind), but Nelson, Pablo Mari and Ainsley Maitland-Niles – playing in central midfield – were not rewarded for excellent, high-tempo displays.

Nelson, Ceballos and Maitland-Niles all stand a chance of facing Southampton on Wednesday and it could provide just the shake-up the Gunners need. All three are assertive, playing on the half-turn and with their head up, looking to slip a progressive pass into the final third. They won’t follow Arteta’s rhythmic model, but right now that can only be a good thing.

If it’s a much-changed XI from the one that lost at Burnley, then back Arsenal to beat Southampton at 5/4.

No more Mourinho pretending if Spurs win at Anfield
After the 0-0 draw with Chelsea at the beginning of the month, Jose Mourinho dismissed talk of a Tottenham title challenge this season, describing his team as a ‘pony’ in a horse race. That’s the right tactic of course – why put pressure on his players this early on? – but there comes a point when he won’t be able to use that line without smirking.

Beat Liverpool on Wednesday and Spurs will move from pony to horse, that’s for sure. Their dropped points at Selhurst Park felt like confirmation they wouldn’t have enough this year, only for Liverpool’s draw at Fulham to change the narrative yet again. Clearly nobody is going to put a string of wins together. If that’s the case, then why not back Tottenham?

They might even have the upper hand at Anfield. Liverpool aren’t pressing like they used to, which is allowing opponents (like Fulham at the weekend) to counter-attack at the heart of their injury-hit defence. With Harry Kane dropping off, confusing Fabinho, and Heung-Min Son spinning behind Liverpool’s high full-backs, Mourinho’s side have a chance of pulling three points clear – and emphatically announcing themselves as challengers to the throne.