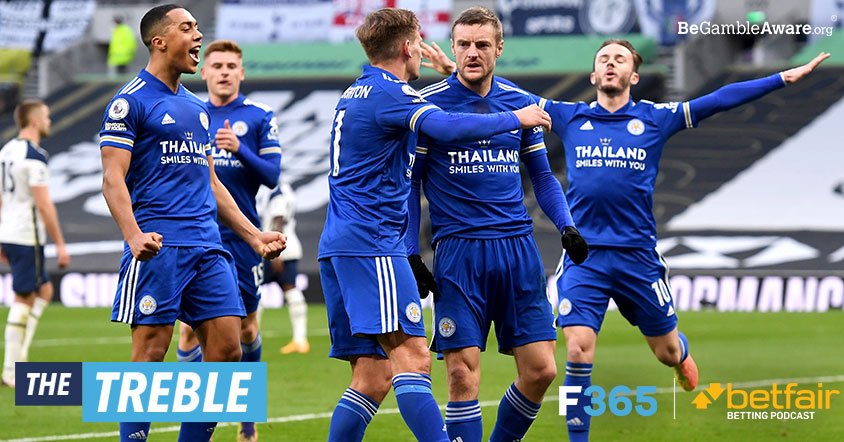 Every week we preview three fascinating things to look out for in the big Premier League games in association with Betfair’s Football…Only Bettor podcast.

Wise up to Leicester’s title chance
Leicester are above Liverpool in the league and two points behind Manchester United. They have a manager who has previously come within one slip of lifting the Premier League title and several senior players who won the trophy with Leicester five years ago. They have lost just one of their last 10 games in all competitions. And yet, despite all this, few pundits seem to think they stand a chance of winning the title.

Perhaps this is because Leicester don’t have a clear narrative. They aren’t on a path towards redemption or salvation or fulfilling a destiny, and they don’t even have a discernible playing style that can be neatly summarised in a few lines. Instead, Rodgers has built a highly adaptable and flexible team who react differently to each opponent. At their best, Leicester are so competent and so efficient they are perhaps a bit too boring to make headlines. The football is very entertaining, but there is rarely a risk with Leicester: they either win relatively easily or lose to a relegation candidate.

A statement win over Chelsea would surely do the trick. It would put an eight-point gap between themselves and Chelsea and give them a 2.0-points-per-game average at the halfway stage – which virtually guarantees a top-four finish if maintained for the rest of the campaign.

More significant than that, beating Chelsea would send Leicester top of the table for at least 24 hours. Who is to say they can’t hold onto that position for the next four months? Leicester have an enviable squad depth and, with Wilfried Ndidi back in midfield, look stronger than ever.

Tuesday’s game against Chelsea won’t be decisive either way, but a win would at least make it impossible for pundits to ignore their charge towards the summit. As I argue here, Leicester should be considered strong favourites to beat Frank Lampard’s downtrodden Chelsea.

Leicester are not going anywhere. Don’t rule them out of winning the whole thing.

How will Villa re-emerge: mid-table or Champions League hopefuls?
By the time Aston Villa line up at the Etihad on Wednesday it will have been 19 days since the senior team last played a game. Understandably, Villa have largely been forgotten about in their absence – and yet Dean Smith’s side would be just two points behind league leaders Man Utd if they won all of their games in hand.

The big question is just how COVID-19 has impacted the Villa squad. Until Wednesday evening we have no way of knowing whether the players have been refreshed by a long absence from competitive football while others endured the back end of the gruelling Christmas schedule, or whether the effects of the virus have taken a physical and mental toll on the squad.

Ten first-team players tested positive on January 7, but the club have not revealed details about the severity of the symptoms exhibited.

Man City away is hardly an ideal fixture to make their return. Even if none of their starting XI suffered with bad symptoms, the most likely scenario is a rusty Villa performance against a team in free-flowing form. City will be significantly sharper, pointing to a simple home win.

But if Villa were to hit the ground running and take points from Pep Guardiola, then the biggest story of the Premier League season might be just around the corner. Villa don’t have European games to contend with next month. If the COVID flare-up acted like a winter break, well, who knows how far Villa could go?

Liverpool in desperate need of goals
Liverpool have now gone four league games without a goal and all of a sudden it is beginning to look like their season could unravel. The margins were always slim under Jurgen Klopp – they over-performed their xG to a total of 24.72 extra points last year – and so it has proven that minor changes have led to a significant downturn in performances.

The effects of COVID-19 on football have impacted Liverpool as much as any of the other ‘Big Six’ sides, with the lack of coaching time pre-season or between games leading to a lower pressing intensity and generally less synchronised tactical battle plans. But at Liverpool, the problem runs a little deeper than this.

Losing Virgil van Dijk and Joe Gomez to injury has indirectly disrupted their attacking flow. Fabinho’s presence screening at the base of midfield and his excellent distribution helped Liverpool sustain momentum in their attacks, as did Jordan Henderson’s high-energy probing for space from the right of a three. Together, they ensured Liverpool attacked relentlessly, suffocating opponents into gradual submission by sending wave after wave of attack.

With these two at centre-back, the tempo has dropped and Liverpool are no longer dominant. This also creates a second knock-on effect: Andrew Robertson and Trent Alexander-Arnold are playing a little deeper in reaction to the increased threat of a counter-attack, limiting Liverpool’s options out wide. Now a narrower and more predictable attacking threat, Liverpool can be held at arm’s length by a stubborn defence.

Jurgen Klopp desperately needs to find a way out of the rut soon, because if dodgy form becomes a full-blown slump then Liverpool – an emotional team used to winning by one-goal margins – might not be able to recover. It goes without saying that Burnley’s claustrophobic playing style (each of their last four league games has finished 1-0) will be a challenge for this weary and confidence-stricken Liverpool attack.

Perhaps Xherdan Shaqiri can build on a useful first half against Manchester United and make the difference. Perhaps Takumi Minamino will get a rare chance. But it feels more likely that Klopp will persist with his misfiring front three and, once again, Liverpool will fail to find their rhythm.