Home Arsenal The truth behind the Arsenal ‘split’ claim on youngster 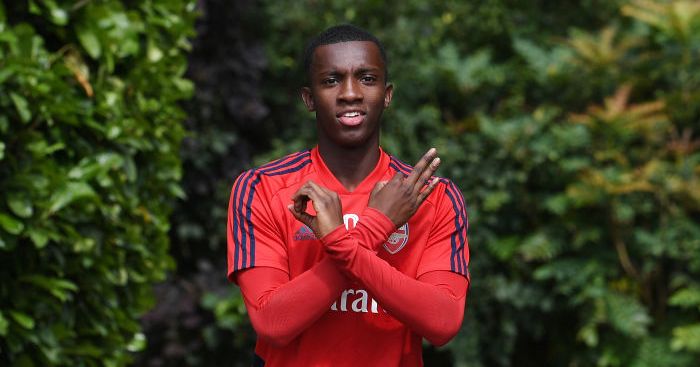 Unai Emery is reported to be ‘having second thoughts’ on loaning Arsenal striker Eddie Nketiah out this season – despite literally saying he planned not to last month.

The Sun have exclusively claimed that Arsenal are ‘split’ on what is best for the young forward, with Bristol City and Cardiff exploring the possibility of a loan move.

Arsenal had contemplated sending the 20-year-old elsewhere in January and at the start of pre-season, but Emery stated in no uncertain terms that his performances had changed his mind.

Speaking on July 21, the manager admitted he was close to letting Nketiah leave for Germany at the start of the year.

“We decided he would stay with us to train and progress with us,” he told the club’s official website.

“We started this pre-season with the same idea as we finished last year – stay with us. And my idea is that if you progress like we are seeing from you, you can have a chance here for us.

“I spoke with him and with the club. He has started with a doubt if it is better for him to stay here with us or leave to play more minutes with another team. But we have examples last year of some players who wanted to go away and didn’t play all we wanted.

“I said to him to first be focused here. If you earn the right to be with us it’s because I can promise you that you are going to have minutes. But in those minutes you need to learn. And in the pre-season at the moment he’s playing like we want.

“The young players who are here, this is the moment for them to show how we can use them to help us in the season.”

Despite this, The Sun exclusively say Emery ‘is having second thoughts’ about letting Nketiah leave on loan and ‘may keep him around’ – even though he said as much about two weeks ago.