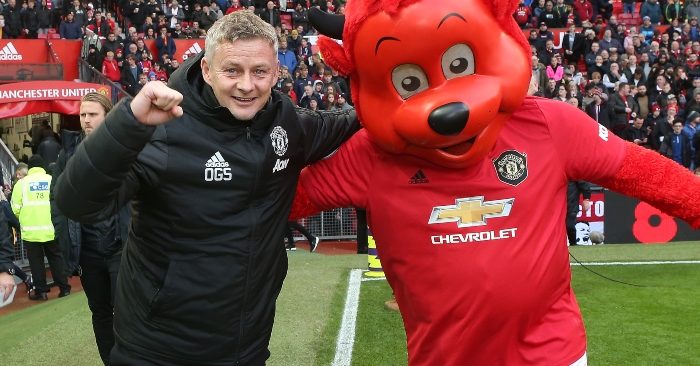 Does your football club have ‘A Way’? Or maybe it has DNA. Some immutable tradition of playing style and attitude that is forever tied to the nature of the club, through the ages?

Plenty of clubs are mentioned in the same sentence as having A Way. Manchester United, West Ham United, Arsenal, Tottenham Hotspur, Everton and more are often spoken about in this context. And if a manager goes against that DNA then it will be the first stick wielded when things go badly.

The Arsenal Way is so embedded as a concept that the club has made YouTube instructional skills videos using it as a title. What does it mean, though? The Herbert Chapman way of playing, with the famous WM formation? Is it the Bertie Mee way that won the double? Could it be the ultra-defensive, ‘1-0 to the Arsenal’ way of George Graham based on that impenetrable back four? Or the title-winning Wenger sides of a dynamic, physically assertive midfield? Who knows? As Emery flitted between a back three and four, it seemed at times as though he was trying to find The Way but couldn’t quite do so, probably because myths – by their very nature – don’t exist; you can’t pin them down and they live in the mind far more than they do or ever did on the pitch. But even so, as soon as he was sacked, here comes Josh Kroenke telling us that Freddie Ljungberg “has Arsenal DNA”. Admittedly, he may only be saying this because he’s heard ‘football people’ uttering such vacuous nonsense; it’s basically another way to express that hoary old favourite “he knows the club”.

Let’s boot this notion into touch. Ljungberg does not have Arsenal DNA. There is no Deoxyribonucleic Acid with AFC on it. No double helix carrying genetic instructions for the development, functioning, growth and reproduction of Arsenal. He’s just an ex-player like thousands before him. Even if we accepted it was possible to have Arsenal DNA, why would that be a good thing? What happens if it is the Terry Neill Arsenal DNA he’s got, or the Bruce Rioch?! No, it’s senseless, it’s meaningless and it’s no way to attempt to judge who will be a good manager and who won’t. After all, Arsene Wenger simply cannot have had any Arsenal DNA when he took over, so to take that as an example, they’d be better off employing someone who hasn’t got the Arsenal DNA. Kroenke is just showing us how little he understands or has even thought about this.

But he’s not alone. Despite the whole concept being spurious in the extreme, ‘he’s got the club DNA’ concept is as rife and widely talked of as a notion as The Way.

Ljunberg out immediately. Just another Unai with so called Arsenal DNA

When Sam Allardyce was the Hammers manager, no-one was in any doubt they were not playing the ‘West Ham Way’. But this really just seems to mean playing entertaining football, which you’d imagine is every supporter’s hope for their teams, not just West Ham.

In fact, it seems that all ‘Ways’ are the exact same: just to play entertaining football with a bit of flair. The only Way I can recall that wasn’t, was the Wimbledon Way, which was a mixture of long-ball football and outright physical assault. Which, in fairness, was very entertaining.

But it apparently is The West Ham Way to play entertaining football and on the occasions they did – such as in the early 60s, mid 80s and late 90s – their fans and managers (especially Harry Redknapp) would happily talk of carrying on the traditions of the West Ham Way, as though it was a Real Thing. Even though a longer tradition was actually to play quite dull or at least, inconsistent football, the way they do now.

This isn’t a unique criticism of West Ham, it is the nature of all football teams. That’s how it always goes. So why does the notion of there being a ‘way’ still stick? There must be a need to believe in something overarching and timeless, even against the facts. Assigning the notion of DNA to something like a footballer or manager is just massive mythologising aggrandisement and it will pretty much always lead to disappointment.

It’s the same at Old Trafford. Lord is it ever. Many, especially the manager, think there is a United DNA. That there is a Manchester United Way that dictates those with the United DNA have to play attacking football, take chances and score late goals, just because they once did so. Is that now some sort of indelible stain that can’t be washed out of the fabric of the place? Must it never be deviated from? Just because they played like that in the 90s, can this never change now? Can a new ‘way’ not be invented? It seems not. Can there be no new future, only a recycling of the past?

Why should Everton still be ‘the school of science’ – a term which seems to be rooted in the late 1920s team. Whatever it means, why should a 2019 team be judged against it? But when Allardyce took over (there’s a theme here) he was criticised for not playing The Everton Way and for betraying the values of the School of Science, just as Marco Silva is now. “Everton fans want to see good football,” some pundit said, recently. But don’t all fans? That’s not uniquely a thing at Goodison. Everton also have A Dogs of War tradition. Why is that not their ‘way’? It seems a ‘way’ can’t be negative. It must always be a good thing. That’s the attraction of the DNA myth and probably explains its endurance.

To Dare Is to Do is the Spurs Way, of course. They are another club which has created a notion of itself which is just to play good, attractive, entertaining football. Of course to the rest of us being ‘Spursy’ has a totally different connotation.

And that’s also what is so unfair about ‘The Way’ if you’re a manager. You’re battling a notion, not an actuality. And no-one can ever beat myths and legends. You cannot be better than something which has been invented to express brilliance. The Way is an anchor to the past. It is the fondly remembered teenage love affair with all the arguments and tension forgotten.

Ironically The Arsenal Way, in common parlance, is now something of a by-word for their long established habit of having a mix of highly talented and rather terrible players who have an all too soft, vulnerable underbelly.

The concept of even having ‘A Way’ always turns on you.

The Manchester United Way is now more profoundly felt in the football firmament as the ability to buy incredibly expensive players who have played well elsewhere and turn them into dead meat – incapable or unwilling to perform to their maximum. That’s now what comes to mind when some pundit or indeed their current manager, declares “that’s not the Manchester United Way” as they turn in another sloppy performance. Well it is now, pal.

A ‘Way’, while tempting to create, is ultimately just a fiction, an invention and cultural construct by fans in an attempt to create an identity to cling onto through the turbulent seas of every season. It is something to identify with.

And it’s easy to see how clubs and players begin to get sucked into such mythologies. We hear ex-players and managers talking about them as a hard and fast thing. Ole Gunnar Solskjaer seems to have bought the deluxe The United Way box set package with the director’s cut, bonus extras, t-shirt, DNA testing kit and limited edition enamel badge.

He has hardened it into a dogma that has a kind of moral imperative behind it. Holding it hard and fast as the definition of how the club must play, even though it can’t. But why not think differently? It wouldn’t be heresy to go against the myth built up over the Sir Alex Ferguson era because at times in those 25 years, they also played functional, often dull football, even whilst winning. So why not invent a new myth? Why not invent a new way to play instead of holding onto the past as a sucky blanket?

There are no traditions perhaps other than the tradition of believing in traditions; there are just phases. There is no ‘Way’, there is no DNA. These ideas are nice, they’re romantic, but it is ultimately a delusion that can do more harm than good with a club and fans clinging to a myth of the past, rather than looking to a new, real future.