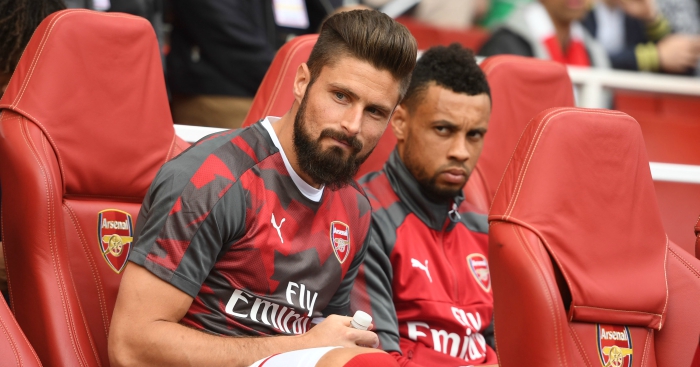 After five Premier League games, we look at every club’s favourite substitute. The poor buggers…

ARSENAL: Olivier Giroud (5 sub apps, 0 starts)
Why did he stay? Because their ‘story was not finished’, apparently. Well the story is a really repetitive one – Arsene Wenger picks Alexandre Lacazette (or Danny Welbeck if it’s Liverpool) up front and then Giroud climbs off the bench. Unless it’s a secondary cup competition.

BOURNEMOUTH: Lys Mousset (3 sub apps, 0 starts)
A man who seemingly only exists in our features section as a forgotten man/young player/potential loanee, Mousset did get a start in the Carabao Cup this week, before he was hauled off to be replaced by goalscorer Josh King. In the Premier League he has played a grand total of 32 minutes off the bench.

BRIGHTON & HOVE ALBION: Glenn Murray (3 sub apps, 1 start)
He clearly should not be a Premier League striker and he barely qualifies for the description anyway. In 117 minutes on the pitch this season, Murray has not had a single shot.

BURNLEY: Ashley Barnes (4 sub apps, 0 starts)
Hands up if you also still get him mixed up with Robbie Blake. Ah, all of you. Barnes is a sh*thouse of a striker who is thrown on for a few minutes at the end of games when you need somebody to chase into corners and commit tactical fouls. Which makes you wonder why they brought Jonathan Walters (two sub apps) in to do the exact same job.

CHELSEA: Andreas Christensen (3 sub apps, 1 start)
Every kid dreams of being Chelsea’s fifth-choice centre-half and the Dane is fully established in that role. Having impressed against Tottenham in a 2-1 win in August, he was promptly relegated to ‘being thrown on to shore things up with a minute left’ duty. And to facing Qarabag and Nottingham Forest.

CRYSTAL PALACE: Nobody
The problem with being absolutely bloody useless is that the team keeps changing. A grand total of 12 different players have made one substitute appearance.

HUDDERSFIELD TOWN: Collin Quaner (4 sub apps, 0 starts)
The Terriers’ go-to man off the bench might just be their lucky charm. He may have only played 57 minutes across four Premier League fixtures, but the one game he missed was Town’s only defeat to West Ham. Learn your lesson, David.

LEICESTER CITY: Demarai Gray (5 sub apps, 0 starts)
Imagine being courted by half the Premier League but being told to stay put because you are going to get plenty of opportunities. And then imagine grabbing a goal and an assist when you get a start in the Carabao Cup. And then imagine it makes no difference at all and you have to stay on the bench while Marc Albrighton starts. You are Demarai Gray and you should be a little p***ed off.

LIVERPOOL: Dominic Solanke (3 sub apps, 0 starts)
It was always difficult to see Solanke getting a whole host of chances as a young striker at a club that doesn’t often play actual strikers, and so it has transpired. And now the obvious route to actual first-team football – the Carabao Cup – has now been closed. If we do this list again in two months, will we be talking about the Ox?

MANCHESTER CITY: Leroy Sane (4 sub apps, 1 start)
Only Manchester City could have a £37m winger as their usual substitute. Even two goals against Liverpool could not earn the German more than 12 minutes against Watford, with 18 minutes against Feyenoord keeping him busy in between. His reward for two goals from the start against West Brom will probably be a warmer seat on the bench. File under ’embarrassment of riches’.

MANCHESTER UNITED: Jesse Lingard (4 sub apps, 0 starts)
When you grab two assists in 51 Premier League minutes of football, you might think you deserve a start. But this is Jesse Lingard, and he quite rightly finds himself behind Marcus Rashford, Anthony Martial, Juan Mata and Henrikh Mkhitarayan in the competition to service Romelu Lukaku.

SOUTHAMPTON: Charlie Austin (3 sub apps, 0 starts)
Only four Southampton players have scored Premier League goals this season and one them is Charlie Austin, who benefited from Mark Noble’s terrible attempt at gamesmanship to score the winning penalty against West Ham. Did that earn him a start? Did it balls. He has played a grand total of 50 minutes for the Saints in the top flight this season.

STOKE CITY: Ramadan Sobhi (3 sub apps, 0 starts)
Another young player whose Carabao Cup adventure has been prematurely ended, so it’s back to the bench for the Egyptian Messi, and a competition with Peter Crouch to see who gets to run up and down the touchline kicking their bum first. He would be cursing the impact of Eric Maxim Choupo-Moting if it didn’t take so damned long.

SWANSEA CITY: Oliver McBurnie (3 sub apps, 0 starts)
The 24 minutes played by the young Scottish striker featured no shots and no chances created, so it’s little wonder that he was sent back to the Under-23s for some practice. Two goals and an assist against Derby’s kids did not even earn him a place on the bench for the trip to Wembley; that was reserved for Wilfried Bony.

TOTTENHAM HOTSPUR: Harry Winks (3 sub apps, 0 starts)
For as long as Moussa Sissoko is starting games in the Premier League, there will be hope for Harry Winks that he can establish himself as something other than a bit-part player at Tottenham. He made his first start in six months in the Carabao Cup this week. Welcome back, Harry.

WATFORD: Troy Deeney (3 sub apps, 0 starts)
Every lazy pre-season preview for Watford listed Troy Deeney as his club’s key player, but Marco Silva demands a little more movement than is comfortable for Deeney, who has been reduced to a cameo role in the Hornets’ impressive start.

WEST BROMWICH ALBION: Hal Robson-Kanu (3 sub apps, 0 starts)
It would have been more if the daft sod had not got himself sent off just minutes after scoring the winner against Burnley. A three-match suspension later, the Welshman was back in his role as willing substitute forward. Astonishingly, he is still only 28.

WEST HAM UNITED: Diafro Sakho (5 sub apps, 0 starts)
So he tried to leave West Ham on deadline day and somehow ended up at a racecourse. But beggars cannot be choosers and Sakho remains a Hammer, though largely a benched one. Two goals in two Carabao Cup starts suggests that he could still make an impact.