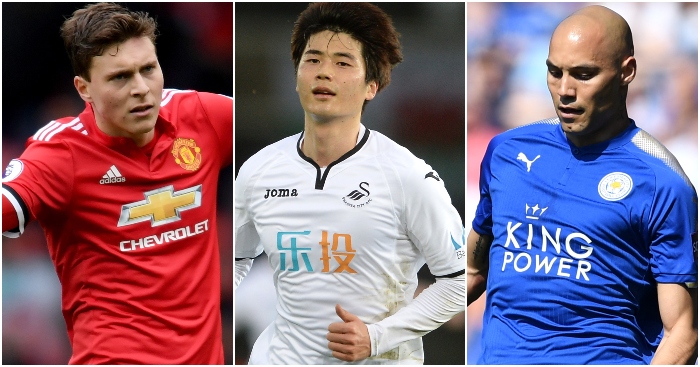 GK: Kristoffer Nordfeldt (Swansea)
The 28-year-old sat and watched Swansea so impressively last season that Sweden want him to perch his cheeks on their bench in Russia this summer.

Carlos Carvalhal gave Nordfeldt the opportunity to get his gloves dirty in the cups but the former Heerenveen stopper will be keeping his Sondicos clean while Copenhagen’s Robin Olsen, recently linked with Crystal Palace, guards Sweden’s goal.

CB: Ali Gabr (West Brom)
The Egypt centre-half didn’t play a minute of first-team football for West Brom after joining on loan from Zamalek in January, but the Baggies are still apparently considering whether to take up their option buy the 29-year-old for £1.1million.

The Baggies have until the end of June to decide and they apparently want to see Gabr in action against stronger opposition than he faced during his two Under-23s appearances. Those outings ended in a 2-1 defeat to Norwich and a 5-1 humping at Brighton. Gabr lines up against Luis Suarez and Edinson Cavani on June 15.

CB: Yohan Benalouane (Leicester)
The former France Under-21 defender eventually decided that he fancied playing for Tunisia after all in March, with the World Cup on the horizon and the need to put himself in the shop window becoming more pressing by the day.

That’s because the Leicester defender has played just one Premier League game all season – the 2-0 home defeat to West Ham in May.

CB: Victor Lindelof (Man Utd)
The defender generally appears more comfortable in the Sweden backline than he seemed for much of his first year at Old Trafford.

It was hardly a disaster of a debut season for Lindelof, despite a wretched start to life in the Premier League. But Jose Mourinho would have been entitled to expect more from a £30million recruit.

With a £17million release clause in his contract at The Hawthorns, Chadli will be keen to impress in a right wing-back role that showcases his versatility. And Belgium’s lack of viable alternatives…

LWB: Ramadan Sobhi (Stoke)
The Egypt winger can alternate flanks with Chadli given they’re both right-footed with a preference for playing on the left.

It would certainly be fair to say Sobhi’s progress has stalled over the last couple of seasons at Stoke, but it seems that he will be playing in Russia safe in the knowledge that his apparently imminent move to Huddersfield earns him a reprieve from the Potters’ relegation.

CM: Grzegorz Krychowiak (West Brom)
The West Brom midfielder is another player who won’t suffer the consequences of Premier League relegation, given the Poland star will return to PSG and the three years remaining on his £100,000-a-week contract while the Baggies prepare for the Championship.

Ki struggled with injury at the start of the season and through Christmas but the 28-year-old presumably believed his two goals and two assists in a four-game period during February and March would be enough to attract offers now his contract at the Liberty Stadium is up.

CM: Cheikhou Kouyate
The Senegal skipper goes to Russia on the back of his worst season for the Hammers, which has led to speculation that Manuel Pellegrini will look to move on the midfielder this summer.

A half-decent tournament and the 28-year-old is absolutely nailed on to be linked with one of the Turkish big-payers.

CF: Mame Biram Diouf
Diouf has probably found his level now Stoke are consigned to the Championship, unless the Senegal striker has been saving a few goals for Russia that may make him a more attractive proposition than his form through a wretched club season.

That’s unlikely given Diouf hasn’t scored an international goal for just over two years since his last strike against Burundi in 2016. Poor Oumar Niasse.

CF: Kelechi Iheanacho
For £25million last summer, Leicester got three Premier League goals out of the Nigeria striker, and two of those came in the final two games of the season, when Arsenal and Tottenham were seemingly not all that arsed about defending.

No one is writing off Iheanacho on the back of one poor season, but the Foxes will certainly be feeling short-changed so far.